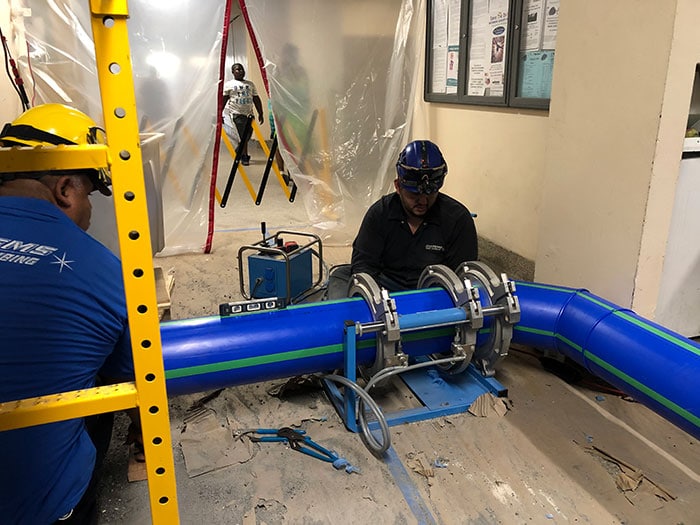 One quote can sum up the frustration that the skilled labor shortage is causing for contracting firms in the HVAC/P industry. And the honor of delivering that quote falls to Glen Drummond Jr., Owner, AC General Inc., Jacksonville, FL.

“It’s very hard to get and keep good labor, even if you’re willing to pay—which we are,” Drummond said. “ I don’t know where everybody is. There’s a lot of work but not a lot of people who want to do it.”

Drummond’s statement is a nearly universal refrain in the industry. Everyone is aware of the gap between the number of older people retiring from the industry, the number of younger people entering it, and the number of people the industry will need in the coming years. And every day contractors look for innovative ways of addressing that gap.

One such method is to consider using Aquatherm polypropylene pipe for commercial building HVAC projects. Aquatherm, which is joined using a heat fusion process, can help alleviate the shortage of skilled labor in a company by reducing or eliminating the need for skilled labor such as welders and allowing better use of companies’ existing personnel.

Personnel with a basic mechanical aptitude can be taught heat fusion in several hours, rather than the months of training and years of practice it takes to become a skilled welder. This allows lower-skilled, lower-wage workers to handle basic jobs, or to serve as helpers on more complex ones. Drummond has put this concept to good use at  AC General, where 12 members of this team are trained on heat fusion.

“We’ve taken sheet metal guys and pipefitters who aren’t necessarily welders and taught them heat fusion,” Drummond says. “They’re craftsmen, so they pick up on it quickly, and it really helps us fill the labor void. You’re not going to teach a guy to weld in six months, but you can teach heat fusion in just a few hours. That’s not to say there’s not skill involved, because there definitely is, but it’s easier.”

RIGHT TO THE BOTTOM LINE

”Anything we can do to save labor in the field goes right to the bottom line,” he noted.

According to Bartkovich, about 35 of the company’s 75 pipefitters are currently trained on Aquatherm heat fusion, and more are trained as necessary for each project.

“We have 495 employees in our family, and we try to treat them really well, because our people are our company,” Bartkovich said. “Our installers like the fact that working with Aquatherm isn’t as back-breaking or tedious as working with steel.”

He added that having pipefitters trained on Aquatherm has been a “lifesaver” on a number of projects.

“If you want to save labor it’s a  good place to start,” Bartkovich said. “Get with your local rep. In our area Ferguson Enterprises has done a great job of training us and getting us the tools and equipment we need. Working with them has basically been a seamless process.”

In addition to the benefits of heat fusion compared to welding, Aquatherm’s Fabrication Services and Scan-to-Fab service also can be a huge help for companies seeking to meet project deadlines while dealing with a shortage of labor.

Through Fabrication Services, the company’s highly trained personnel at Aquatherm’s U.S. headquarters in Utah, working with the latest fusion equipment in a controlled environment, can custom fabricate any size piping assemblies and ship them ready to install to any jobsite in North America.

Aquatherm’s Scan-to-Fab service provides a trained technician using a 360-degree 3D camera to create a point cloud of a system or a mechanical room, thus ensuring accuracy of measurements down to 1/8-in. Or, Aquatherm can work with contractors’ 3D scans.

“We had done all the laser scanning and 3D modeling ourselves; it was awesome to take our models and send them directly over to Aquatherm to have them produce the prefab pieces,” Abbott said. “It saved us a lot of labor and it kept the project on schedule. That was critical because it was a hospital project and we had very limited time for shutdowns.

“It was eye-opening how fast we were able to do all this with the right technology,” he added. “We simply coordinated our 3D scans and models with Aquatherm, and the pieces were created and shipped to us within weeks. It was impressive.”

WALK IN CLEAN, WALK OUT CLEAN

“When we walk into a job we’re clean, and when we walk out we’re clean,” he said. “Our backs aren’t hurting. It’s just an easier product to work with than steel or even the flameless grooved systems that we’ve tried.”

From a labor standpoint, those factors can lead to greater productivity, job satisfaction, and workforce retention, Lanfair noted.

He added that Precision Air Systems also has used spools that were fabricated offsite and shipped to the jobsite by Ferguson.

“On our last Aquatherm project we had prefabrication done at Ferguson’s facility in Mississippi, and their work was dead-on,” Lanfair said. “Their workmanship was perfect. We had no issues whatsoever.”

Mickey Merton, President, Adrian L. Merton Inc., Capitol Heights., MD,  said the company has used Aquatherm on a host of projects over the past five years, and has more than 40 installers trained on heat fusion.

“It does help us address the labor shortage to some extent,” Merton said. “A less-skilled man can be trained in a day to learn how to put Aquatherm together, whereas it takes guys years to learn how to weld.”

Merton added that having his people trained on Aquatherm could have a “major” positive impact on the labor shortage at his company—if more engineers and architects called for it.

“We still do mostly copper and steel because that’s what architects and engineers are putting into the plans,” Merton said. “But I think Aquatherm may end up being like VRF (variable refrigerant flow) systems. It took those systems a while to become accepted, but people eventually realized how well they worked and now the market for them is going nuts.”

Drummond pointed out another benefit to training people on heat fusion: pride in ownership of a new skill. Although he has 12 installers trained on heat fusion at his company, he has one who is his “Aquatherm specialist.”

“We have one main guy who’s always fusing  every day—either doing fabrication work in the shop, or working in a trench with a [Widos] 4900 fusion machine or up in the ceiling with a [McElroy] Spider™, that’s pretty much all he does. And because that’s all he does, it ensures quality control. He knows all the tools and how to use them, and he can train as well.

The really good news for Drummond in an age of skilled labor shortages: his Aquatherm specialist is 22 years old.

“He’s only 22 but he feels like a captain now,” Drummond said. “He feels that there’s something he can do that nobody else in the company can do, so he owns the job. He feels empowered, and that’s good for me because he’s 22 and I want him to work with me for the next 20 years.”