The plant’s facility maintenance supervisor chose to replace the steel piping with Aquatherm Blue Pipe, which is completely non-corroding and will not break down, weaken, or scale.

An injection molding facility had begun to incur losses because its existing carbon-steel piping was experiencing excessive corrosion, but replacing 300 ft of welded steel for a manufacturing process that virtually never stops was not going to be easy.

The plant’s facility maintenance supervisor chose to replace the steel piping with Aquatherm Blue Pipe, which is completely non-corroding and will not break down, weaken, or scale like metal piping systems.

A mere half-second loss in production time can cost an injection-molding facility tens of thousands of dollars. Jacob Francis knows the stakes are high. As facility maintenance supervisor at Berry Global in Lawrence, KS, he plays that game every day. So, it was a nail-biting proposition when, faced with the need to replace a large portion of pipe used to transport cooling water to more than 20 injection-mold and thermoforming machines, he opted to transition the plant from carbon-steel pipe to Aquatherm polypropylene-random (PP-R) Blue Pipe® in Spring 2017.

The existing carbon-steel piping, along with an undersized chilled-water storage tank, had to be replaced because of excessive corrosion. Cooling the molds is a critical, time-sensitive part of the injection-molding process; the plant already had begun to incur losses because rust and pipe scale was interfering with the cool-water flushing of the molds.

“Our [cooling] cycle time on some of the equipment had increased due to hot cores. This resulted in significant losses in production,” Francis said.

The system itself is simple. Chilled water leaves the chiller at 55°F and flows directly to the injection-molding equipment. Water exits through orifices in the aluminum or steel molding equipment and circulates to what was originally a 4,000-gal holding tank before circulating back through the chiller. However, according to Francis, at the required 3,800 gpm, the water never had an opportunity to “settle,” causing air to be absorbed within the system. The completely aerated system not only was rusting badly, but the excessive air also prevented water treatment chemicals from adhering to and protecting the carbon-steel pipe effectively. Corrosion already had eaten two holes in the chilled-water tank.

The situation would only get worse until the piping was replaced, but that created an even greater challenge: How do you replace 300 ft of 10- and 16-in. welded steel pipe for a manufacturing process that virtually never stops?

The plant in Lawrence, one of Berry Global’s 130 facilities around the world, produces food grade plastic cups and containers for various restaurants and food and beverage industries. The plant operates 24/7 every single day of the year, save a day or two at Thanksgiving and Christmas. Shutting down operations for just one hour comes at a high price to large injection-molding manufacturers like Berry, a price they most certainly would have to pay several times over if the piping was replaced with field-welded carbon steel, which can take a long time to install. 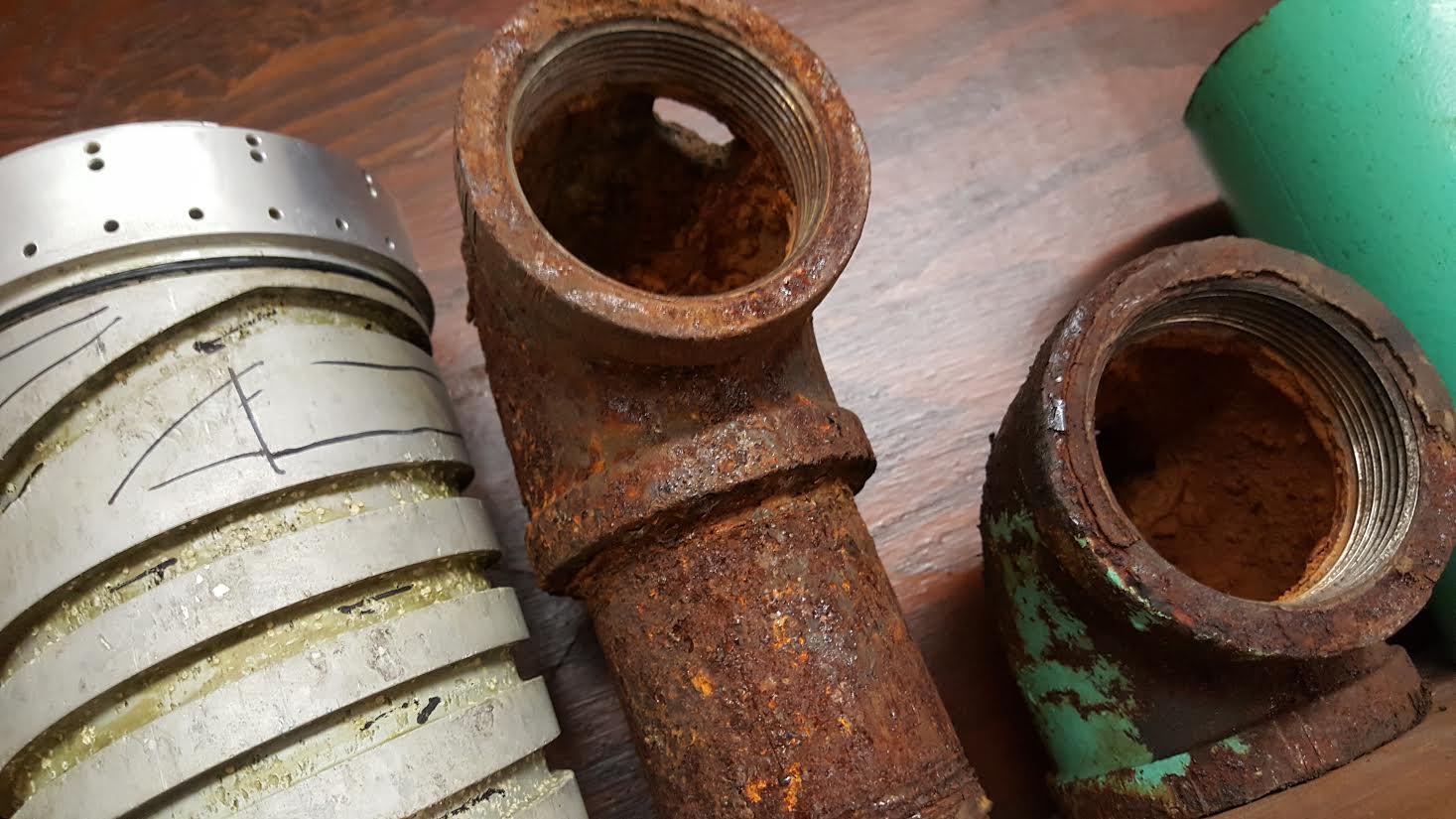 Even though no one from P1 Group previously had installed Aquatherm pipe in such large diameters, Mihalchik’s conversations with the local Aquatherm distributor convinced him that the piping might be the answer for his longtime client, Berry Global. Wedged between a costly shutdown and a rapidly deteriorating system, Francis agreed to listen to presentations from Aquatherm, during which he learned why Aquatherm is the ideal choice for critical process applications like his.

Wedged between a costly shutdown and a rapidly deteriorating system, Francis agreed to listen to presentations from Aquatherm, during which he learned why Aquatherm is the ideal choice for critical process applications like his.

Aquatherm PP-R piping systems have all of the characteristics you could want for a mission critical application, from a flameless fusion pipe-joining process to long-lasting, reliable service. Unlike metal pipe, which must be welded into place at the jobsite, Aquatherm pipe components are joined using a safe and simple heat-fusion process to create virtually leak-proof connections in minutes. Because the product is so lightweight, large sections can be fabricated in a contractor’s shop – or in Lindon, UT, at Aquatherm’s North America headquarters in the state-of-the-art Design & Fabrication Services department – then easily transported to the jobsite. Because Aquatherm PP-R is completely non-corroding, it will not break down, weaken, or scale like metal piping systems and does not require chemical treatment.

“About five or six of our installers attended the five-hour course taught by Aquatherm where they learned all the different heat-fusion welding techniques,” Mihalchik said. The installation included the construction of a new 10,400-gal outdoor chilled-water tank, 16-in. supply and return piping to and from the tank, and assorted lengths of 12- and 10-in. piping connecting a 16-in. Aquatherm header to the various injection-mold presses. Nearly all of the piping sections were fabricated in advance at P1 Group’s fabrication shop, then installed using rented Widos butt-welding equipment as well as a McElroy Spider™ and McElroy handheld socket-fusion equipment. The only exception was the 16-in. header, which  Aquatherm’s Design & Fabrication Services team fabricated because P1 Group did not have ready access to the welding equipment needed for the large diameter pipe.

The fabricated piping sections, some of which were 15 ft or longer, were lightweight enough for just two men to carry into the installation space and hoist into place. This was a huge advantage for P1 Group, given the project’s ever-shrinking installation window. “At first, we were going to have three days for the actual installation, but that got whittled down to just 24 hours on Good Friday before Easter. The time frame was really challenging, but Aquatherm made things a lot easier.”

The only glitch, which occurred during the all-night installation, turned into a blessing for Mihalchik and his crew. At one point, the installers discovered that two of the 10-in. lines off the 16-in. header had been cut too short. It might have been a panic-inducing discovery, but representatives from Aquatherm and the distributor were at the jobsite during the installation and were able to oversee some impromptu pipe fusion to adjust the length of the 10-in. pipe.

“They showed us how easy a fix it really was. In a way, it was a fortunate mistake because now we know we can work through it easily on our own. I’m a 100-percent believer in Aquatherm now for sure,” Mihalchik said. Francis is equally convinced he made the right decision choosing Aquatherm. In fact, he had another 700 ft of Aquatherm Blue Pipe installed for domestic water service to Berry’s nearby warehouse, and he looks forward to identifying even more  opportunities to use Aquatherm piping.

“The fact that we didn’t have to insulate the pipe is another huge benefit. None of the indoor pipe had to have any insulation, even though we are carrying 55°F water in an 80°F ambient space,” Francis said. Francis added that despite some extremely warm, humid days since the pipe was installed, he has yet to see a drop of condensation on the Aquatherm pipe. “I have one flange where carbon-steel pipe meets the Aquatherm. I can put a hand on each and feel that the Aquatherm is barely below room temperature while the carbon-steel pipe is really cold.”

An inherent low thermal conductivity (R-value of 1 or more depending on the pipe size and standard dimension ratio) makes insulating Aquatherm unnecessary in certain indoor applications. Not only does this save installation costs, it creates a cleaner, more uniform installation in which the pipe is exposed for easy inspection.

“It really looks sharp,” said Francis, who also credits P1 Group for a very professional-looking installation. The plant already has seen improvements in system performance, both in terms of chiller usage and pump efficiency. Perhaps even more important, the Berry plant has eliminated future downtime caused by pipe corrosion – at least where Aquatherm is installed. Furthermore, the company has all but eliminated the need for chemical treatment in its piping system. “For a process project like this, Aquatherm was a no-brainer choice,” Francis said.