Retrofitting the cooling system in a historic, 95-year-old building that had not been designed to accommodate modern hydronic piping

Aquatherm pipe is lightweight, easy to work with, and versatile, and a first-time installing contractor easily field fabricated the piping system to meet the needs of the project 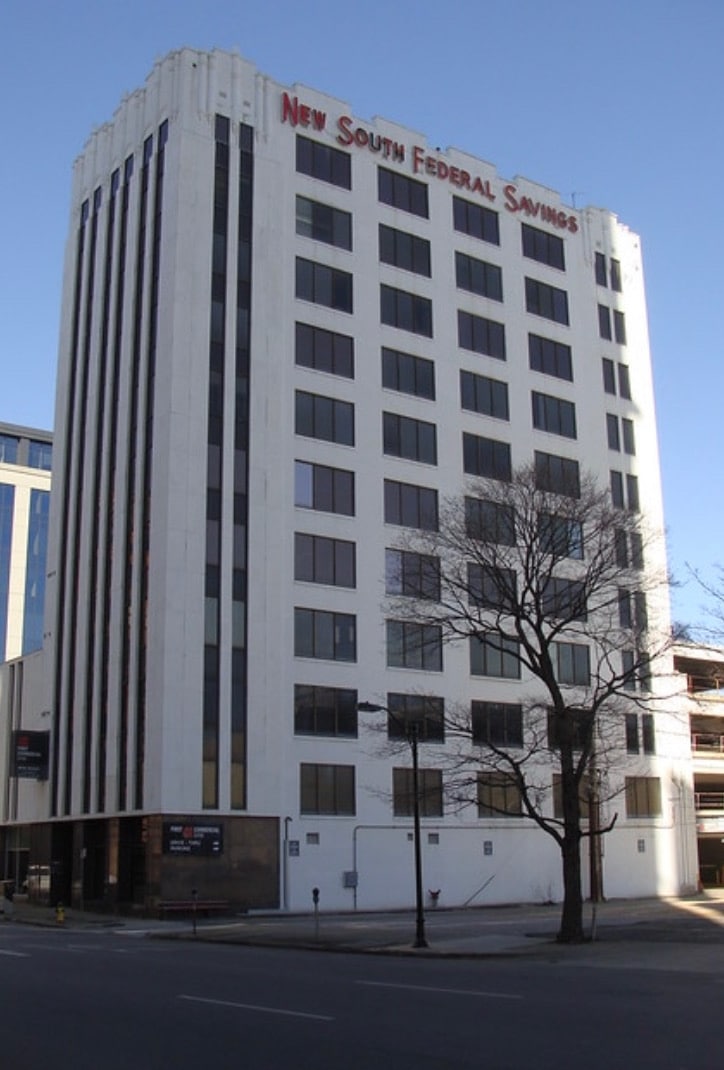 The 10-story New South Federal Savings Building has been a part of the Birmingham skyline since 1925.

There is a first time for everything, and that includes contractors installing Aquatherm pipe. Aquatherm is the industry leader in training and support, but for a contractor there’s still nothing quite like successfully completing that first project.

For Service Tech Inc., a heating and air conditioning firm in Birmingham, AL, that is celebrating its 30th year in business in 2020, its first experience installing Aquatherm came at a historic landmark building in Birmingham.

At the risk of a “spoiler,” how did the project go?

“It was great, man,” said Brandon Henley, Operations Manager at Service Tech. “Everyone on the installation team was impressed with how well-engineered the Aquatherm pipe was and how easy it was to work with.”

Birmingham was founded in 1871, the result of a merger of three farm towns. It didn’t remain a farm town for long. It grew so rapidly between 1880 and 1920 that it earned the nickname “The Magic City.” In the process it became a primary industrial center of the southern United States based on mining, iron, and steel. More recently it has become one of the largest banking centers in the South.

Today Birmingham is the largest city in Alabama and is the seat of Jefferson County, which is Alabama’s most populous.

Since 1925, the city’s skyline has been graced by the 10-story, 120-ft New South Federal Savings Building. The art deco structure originally featured a brick and terra cotta façade; its current Texas granite and white Alabama marble façade was installed during a renovation completed in 1959.

The building’s first two floors have been occupied for many years by a banking tenant, but the building recently took on a new life when the United States Census Bureau chose to make it the area office for the 2020 U.S. census. To prepare for this new tenant it was necessary to rehabilitate four of the building’s floors, including replacement of its old heating and cooling system. 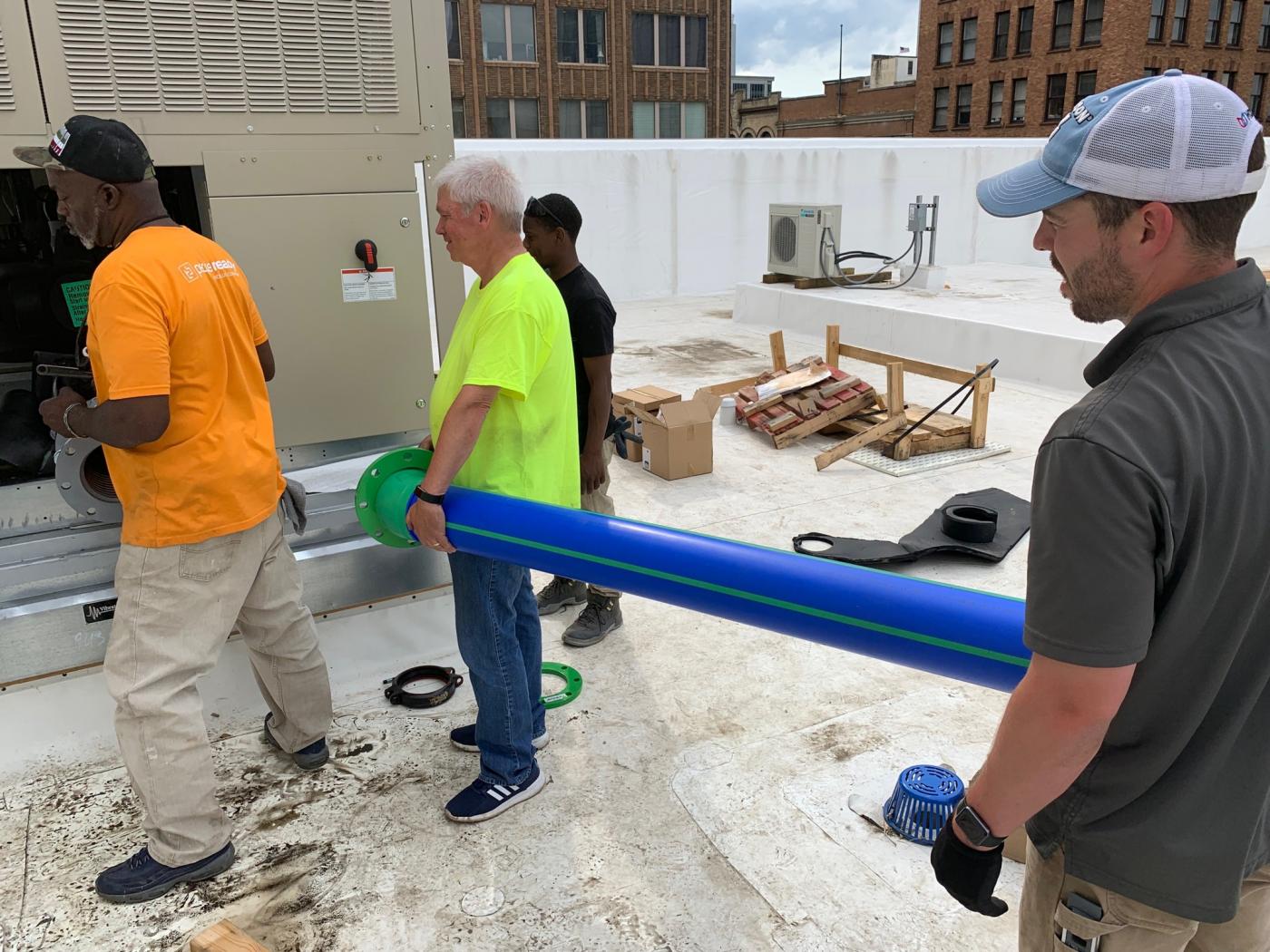 The light weight of Aquatherm pipe makes it easy to handle and maneuver, and eases the weight load on the building’s roof.

OUT WITH THE OLD

The building’s owner decided to do away with the old system of rooftop units, and invest in a new (and much more efficient) chiller-based system. This meant installing pipe in places where there hadn’t previously been pipe.

The firm of Zgouvas, Eiring, & Associates, Consulting Engineers, chose to spec Aquatherm pipe for the new chiller system at the New South Federal Savings Building. The firm specified the polypropylene pipe because of its safety profile when working in an existing (and occupied) building.

“I thought it would be easier to work with because you wouldn’t have to be welding steel pipe in the building,” explained Jay Eiring, a partner in the firm. “I proposed it to the building owner and he gave us the green light to proceed.”

The project came with its share of challenges. The installing contractor had to work in very tight quarters because of the building’s age and the fact that the original mechanical chases weren’t designed to accommodate hydronic piping. Some of the piping itself had to be relocated to exterior walls because of site constraints. To add to the fun, the chases that the pipe needed to run through were filled with the building’s electrical and telephone wiring. Finally, the incoming government tenant wanted to get the office up and running quickly, resulting in a compressed timeline.

These challenges would have been significant no matter how experienced the installation team was. For first-time Aquatherm installers Service Tech, however, the combination of Aquatherm training and support, the product’s inherent ease of use, and strong local support from the Aquatherm distributor helped the installation go smoothly and successfully. 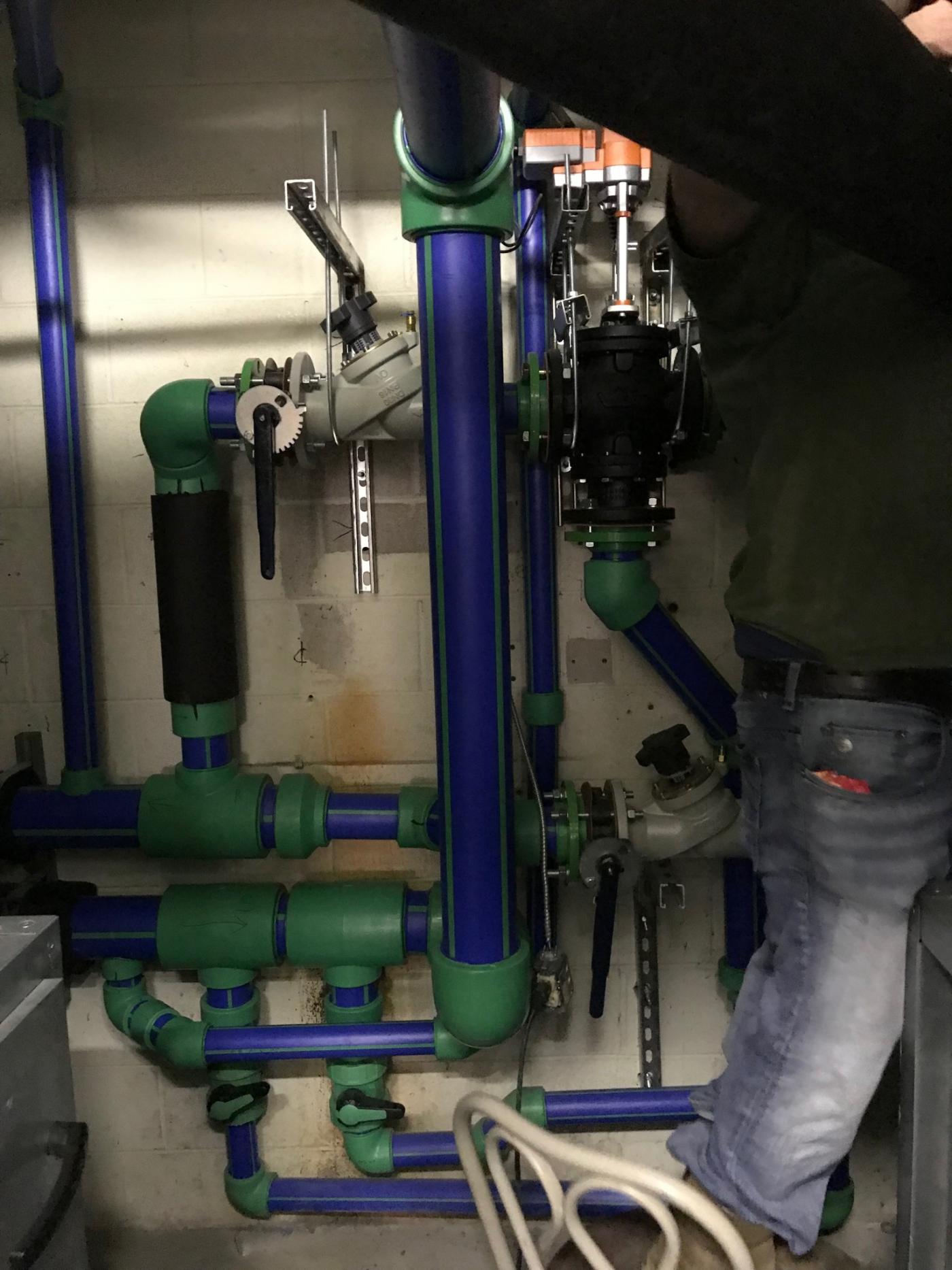 Henley noted that while welding steel pipe would have been dangerous in the tight quarters of an existing, occupied building, all the connections with Aquatherm were made safely thanks to reliable heat fusion, which creates virtually leak-free connections without welding, sparks, or open flame.

The Aquatherm installation also went much faster than welding steel. During installation it wasn’t unusual for Service Tech to have two McElroy Spider™ 125 fusion machines and two socket fusion irons in use at the same time.

“After we completed the training we were really feeling good about doing the heat fusions ourselves,” Henley said. 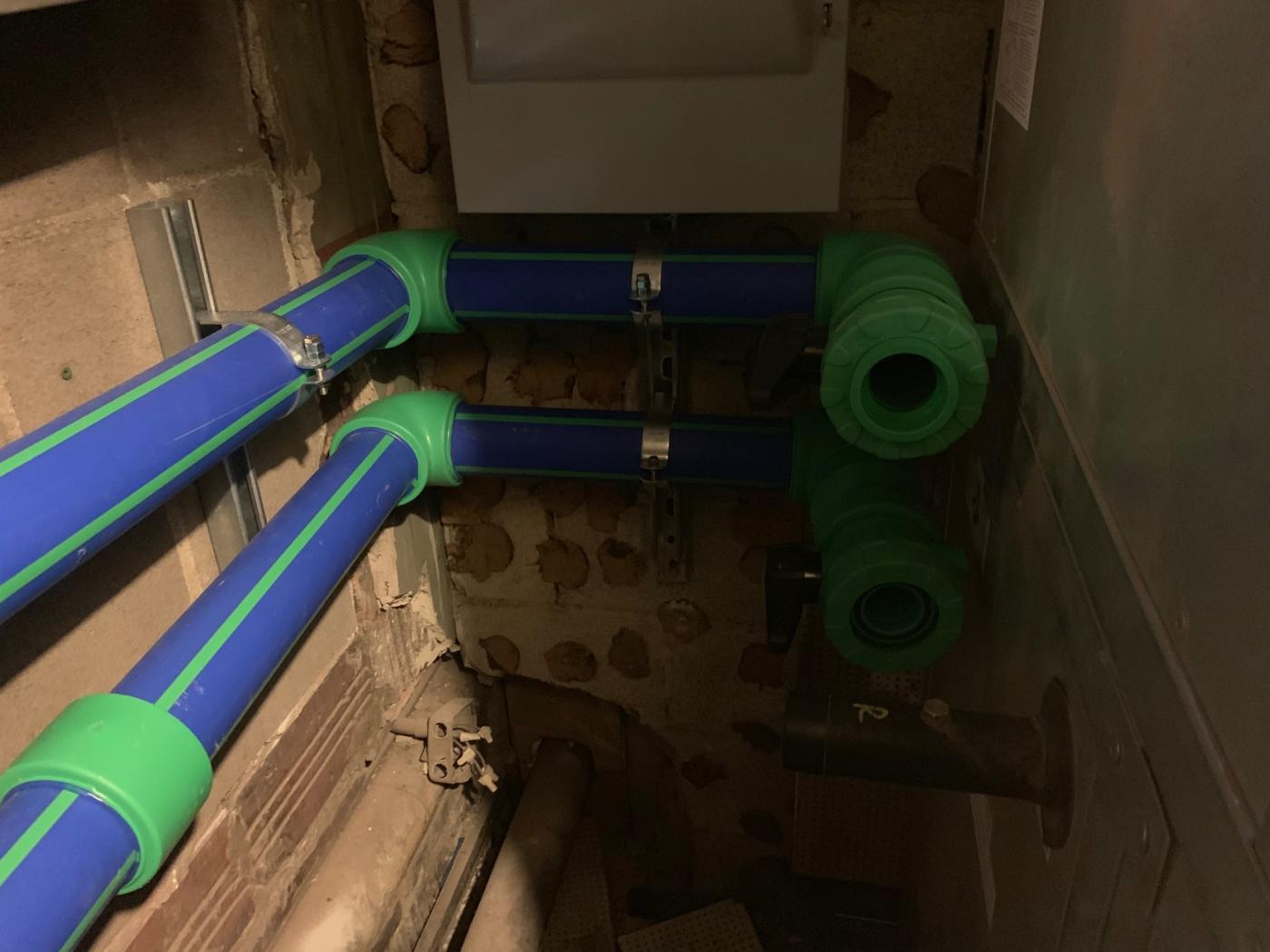 The light weight of Aquatherm pipe earned rave reviews from Henley and his crew. He noted that this project was very labor-intensive: Service Tech had to remove 16 old rooftop condensing units along with all of their refrigerant piping, replace the old air-handling units with new hydronic fan coils units, install the new Daikin 200-ton air-cooled chiller on the building’s roof, and pipe the system. In most cases piping the system may have been the most difficult part, but after all the other heavy lifting on this project Service Tech’s crew found Aquatherm pipe to be a pleasure to work with.

“One person could pick up a 19-foot length of three-inch Aquatherm pipe and carry it to the next floor,” Henley said. “There’s no way someone would be able to do that with three-inch cast iron or steel pipe. And the light weight was a huge factor where the pipe had to be relocated to the building’s exterior walls.” In addition, it eased the weight on the building’s roof.

Henley’s crew also appreciated the cleanliness of the Aquatherm pipe compared to steel pipe, and he noted that once the system was up and running the pipe’s resistance to rust, scaling, and corrosion added to the system’s ease of operation and maintenance.

“We barely had to use any kind of corrosion-resistant additives in the chiller water,” Henley noted.

This project represents a first-time Aquatherm contractor successfully field-fabricating and installing a complete system on a complex project, which speaks well for both Service Tech’s personnel and the ease of working with Aquatherm pipe.

Eiring added that Aquatherm is a natural choice for existing buildings.

“It’s easy to work with, it’s lightweight, and there’s no welding on site,” he said. “And Aquatherm’s 10-year warranty is something a building owner definitely doesn’t get with steel pipe.”

Summing up his company’s first experience with Aquatherm, Henley said it was the pipe’s toughness that impressed him the most.

“It was so much more durable than I initially thought,” he said. “After working with it I’m convinced that pipe will still be there even after the building is gone.”