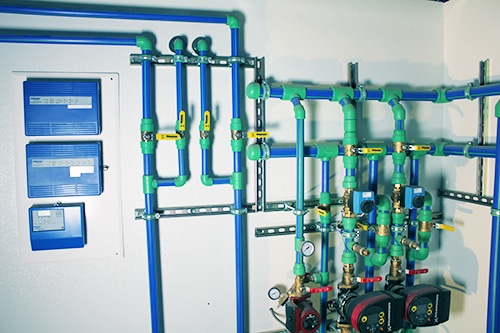 Man versus nature is a classic story that has been told and re-told throughout human history. The latest version comes from Harvey’s Plumbing & Heating in Bozeman, MT, where six beautiful yet unforgiving mountain ranges surround the town.

In this tale, technology and efficiency team up to overcome daunting HVAC/P system installation challenges, as Harvey’s designs and fabricates offsite the mechanical rooms for large, custom homes and then ships them directly to the lot ready to install.

Since 2019 the company has designed, fabricated, and installed five “pods” (as it calls the modular mechanical rooms) for high-end homes in the Bozeman area.

“Harvey’s does a lot of high-end custom homes in the ski resort communities around Bozeman, and some of the jobs are very remote,” said company owner Bob Harvey. “Access to the jobsite can be very limited because we’re working in a mountain environment—sometimes we’re trudging through two feet of snow, sometimes we’re slipping and sliding through mud. That means mobilization of our materials on the site is a big key to profitability.”

Ultimately, Harvey’s came up with a solution to the challenges presented by the rugged Montana landscape: do as much as possible in the company’s fab shop.

“We’ve created a modular building or pod containing a 100 percent finished mechanical system that we can ship directly to the site before the house is even framed up,” Harvey said.

FILL IN THE BLANKS

Ron Huber, Hydronics Manager, Harvey’s Plumbing & Heating, said Harvey’s orders the “blank” pods from a supplier. The size of the pods is customized to the unique needs of a home, and some homes may require more than one. 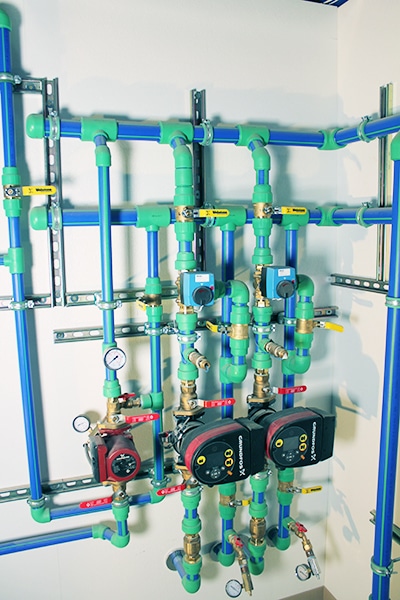 Being able to fabricate the pods in a controlled environment rather than on the jobsite helps contribute to “a better-looking, more aesthetic finished mechanical room,” says Ryan Sullivan, Harvey Plumbing & Heating’s Engineering Manager.

“We then do all the prefabrication in the shop and install the fabbed pieces into the pod as they are completed,” Huber said. “We fuse all of the main components in a controlled environment and install them in the pod in sections. When we’re done, we essentially have all our electronics, plumbing, heating and water heaters in place . . . everything’s finished.”

The pods are transported to their destination on a flatbed truck and positioned with a crane. They are sealed against even the harshest weather so they can remain in place for the duration of the construction; some have waited onsite for up to two years. Then, once the house is closed in and insulated, the Harvey’s crew unwraps the pod, connects the home’s piping and electrical service to it, and the system is ready to go.

As with many groundbreaking advances, the genesis of Harvey’s Plumbing & Heating’s modular mechanical rooms was technology.

Harvey said he had long sought to create three-dimensional piping plans for his technicians. However, it has only been during the past few years that technology has allowed three-dimensional piping plans to be put on paper and communicated to technicians in the field. After early frustrations with some other commercially available products, Harvey found success using Revit.

Modeling projects and creating piping plans in Revit not only allowed Harvey’s to fabricate HVAC/P systems in its shop, it also allowed the company to deliver to its clients a submittal package, a warranty package, and a service package based on the drawings.

“There were some struggles early on with not being able to accurately model a house because houses often don’t get built exactly according to the original plans,” Harvey said. “So, we partnered with Leica and got into digital laser scanning. Now we’re able to go out in the field, scan the real-world existing conditions, and, using the HoloLens, verify that we’re able to run our pipe, duct, hydronic lines, and vents without conflicts. That enabled us to achieve about a 95 percent success rate on our prefabrication process. Without scanning, I’d give us about a 50 percent chance of being able to pull this off.”

Ultimately, Harvey’s began to develop its own software, called Allied BIM, and incorporate it into Revit.

“Allied BIM takes a big piping model and enables us to spool it down to smaller pieces and parts,” Harvey explained. “We can put the smaller pieces to paper, tag them, give them to our technicians, and they can fabricate the system directly off those spool sheets. It also allows us to go directly to an automated saw. Currently we’re using a saw called TigerStop. It has an automatic positioning system that lets us push multiple pieces of pipe and fabricate spools very accurately with very little waste.”

Ryan Sullivan, Engineering Department Manager, Harvey’s Plumbing & Heating, said the modular mechanical rooms are a natural outgrowth of the company’s emphasis on putting as much information as possible into its models and drawings.

“Making more decisions in the office and in the design process means less problem-solving that has to take place in the field,” he said. “We’re able to maximize our installers’ value and potential by eliminating the things that bog them down. The more things we can take off their plates and streamline for them, the more efficiently the whole process will run.”

According to Sullivan, the pods can be utilized for any type of mechanical system, but the company sees the greatest benefit with hydronic systems because those typically involve the most labor.

AQUATHERM PARTNERSHIP A KEY TO SUCCESS

Harvey said Aquatherm polypropylene pipe helps contribute to the success of the modular mechanical rooms for a number of reasons: it’s light, it’s durable, and it lends itself well to off-site fabrication. In addition, Aquatherm was among the industry leaders in ensuring that all of its product families and parts are available in Revit.

Harvey added that his company’s partnership with Aquatherm extends into the shop and the field.

“If we need anything, Aquatherm is there to assist us or answer questions for us,” he said. “And if anything comes up—for example, we don’t have the capability to do certain work—Aquatherm has a fabrication facility of its own. They can build the larger spools and manifolds that we don’t have the manpower or the fusion tools to build.”

Huber noted that prefabbing the Aquatherm pipe for the pods is a key to the success of the entire concept.

“The ability to prefab the piping in a controlled environment instead of on the jobsite really makes our lives easier and cuts our travel and labor time down considerably,” he said.

Sullivan added that homeowners appreciate the “greenness” of the pods.

“We generally can save around 20 trips to the job site, which can be 150 miles or more round trip,” he said. “The homeowners also benefit from a better-looking, more aesthetic finished mechanical room.”

Bob Harvey noted that over the years there was some skepticism about Aquatherm polypropylene pipe because it was a new product on the market. However, he said such skepticism, and claims of the product having problems in certain applications, are usually easily traced to errors by system designers or operators—not the product. 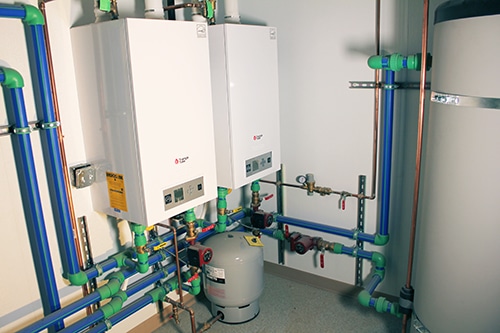 The pods can be utilized for any type of mechanical system, but hydronic systems generally provide the greatest benefit because they involve the most labor.

“Aquatherm has proven itself over the years,” he said. “When it’s installed correctly and the fusions are done properly, the margin for error is zero—you simply don’t have any leaks. And we’ve not seen operational problems. As long as it’s used in the right applications and used for what it’s intended for, it’s going to perform.”

Huber agreed. He said in his 45 years in the hydronics business he has used many different types of equipment and piping. With any system or any type of pipe, the most important items that ensure proper system performance and longevity are proper installation and operation.

“If it’s installed improperly, or used in a way that they shouldn’t be used, you’re going to have problems with any type of piping system, whether it’s copper, PEX, polypropylene or anything else,” he said. “A lot of that is just awareness of the part of the installer. They need to learn about the product, especially if they’ve never used it before. We’ve seen beautiful custom homes where the mechanical system is a mess because the installer misused a product or installed it improperly. That’s where most of the problems come from.”

SOLUTIONS FOR A SMALLER LABOR FORCE

For Harvey’s, an added bonus to the pods is that they help ease the ever-present shortage of skilled labor that plagues so many industries, including HVAC.

“In today’s construction industry we are experiencing a major shortage of skilled craftsman, faster paced project schedules, and increases in project costs,” Sullivan said. “Modular construction such as these pods is a way to minimize these impacts and be able to provide a higher quality product with less field time and thus a smaller skilled labor force. It is essential to the growth of the construction industry.”

It may even help attract talented young people to the industry, he added.

“Historically, the construction industry has been slow to adopt new technologies,” Sullivan said. “But over the last handful of years there has been a bigger push to implement advances like prefabrication modeling, laser scanning, and augmented reality. Younger people like working with these technologies and I think it makes our industry more appealing to them. Although it’s not easy to replace experienced skilled labor in the field, we can help mitigate those losses by maximizing the amount of work we do here in the office and the fab shop.”