A historic, 1931, skyscraper needed a dependable piping solution for its new closed-loop chilled-water system; it also needed to be easy to install in an occupied building. 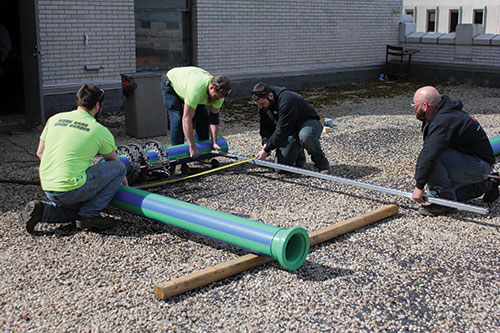 After a skyscraper has been around for a few years, for some of us, it begins to fade into the skyline. And after a few decades, when buildings begin to wear around the edges, we barely notice a few of the, once majestic, structures. It can be easy to forget that some of these institutions aren’t simply boring office buildings—they are perfect examples of influential architecture.

The centerpiece of downtown Akron, OH, the 27-story FirstMerit Tower was completed when art deco was at the height of its popularity in the U.S. in 1931. After undergoing a facelift and restoration, the Tower is listed on the National Register of Historic Places, which helps ensure the building won’t be forgotten for many lifetimes.

As part of continuing interior updates, FirstMerit Tower needed a larger-capacity cooling tower, energy-efficient variable frequency drive (VFD) pump assemblies, and associated piping for its HVAC system. Originally, an open-loop piping system consisting solely of supply lines was used to cool the lower floors—floors 12 and below; however, on the upper floors—those above 12—city water was being run once through an air-conditioning unit then dumped down a drain. Now, the open-loop system continues to feed cooling-tower water to the lower floors, while a new closed-loop system recirculates cooling-tower water for the upper floors via supply and return lines.

The old system was “highly inefficient and wasteful,” said Kevin Kindbom, V.P. and co-owner of consulting engineering firm Bandwen Williams Kindbom, Akron. “The building was dumping about 500 gpm. of water down the drain on the hottest day of the year.” 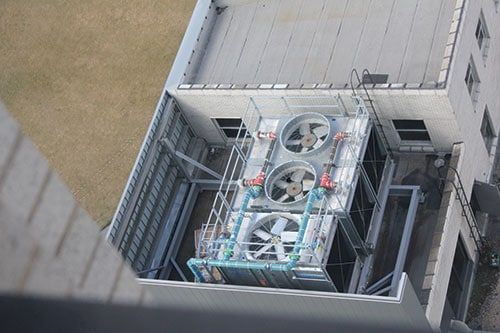 The job’s contractor, Harner Plumbing, Mantua, OH, chose one new 200-ton Marley cooling tower to accompany the two existing cooling towers, four Armstrong pump assemblies with Danfoss VFDs—plus three more Danfoss VFDs for the cooling-tower fans—Armstrong triple-duty balance valves, a heat exchanger, and an Armstrong air separator. The contractor also had to pick a piping solution that could match the efficiency of the modern closed-loop system’s design. Although the project originally was specified with Schedule 40 grooved steel, Harner Plumbing had been working and having success with a type of polypropylene-random (PP-R) pressure piping called Aquatherm. Because it had used Aquatherm systems for more than three years on a variety of projects, Harner Plumbing was able to select the PP-R piping again with confidence. By switching from steel to Aquatherm PP-R piping systems, the project saved $18,000.

Additionally, there was a problem with a 150-ft run of 8-in. Schedule 40 pipe during the project. The piping system was shut down while the new Aquatherm PP-R piping was installed. “When the Schedule 40 piping system was reenergized, the whole system basically blew up. Even though the system was rated for the little bit of extra pressure we added, it had rusted out enough that even just a small bit of extra pressure caused the whole seam to break,” Kindbom said. “That was a nice little emergency at the end of the job.”

Further, “steel is so much heavier than Aquatherm,” said Jeremy Bejger, Project Manager for Harner Plumbing.

The SDR 17.6 Aquatherm Blue Pipe® used on the project is extremely light weight; it weighs just 2.93 lb. per linear foot of 6-in. pipe. Comparatively, Schedule 40 steel weighs close to 19 lb. per foot.

“On the labor, Aquatherm gave us a big advantage,” said Harner Plumbing Owner Ray Harner. “The labor savings really helped; the Aquatherm was easy to lift and move.”

Heat-fusing the Aquatherm piping systems required less labor than trying to groove the steel pipe. Easy to handle and put in place, using Aquatherm saved the project another $20,000 or more in labor.

“We might not have gone after a job like this, especially with this large size of piping, but after a couple of our guys visited the fabrication shop [at the Aquatherm North America headquarters] in Utah with Aquatherm Regional Sales Manager Matt Denny, we realized there isn’t much we can’t do [with Aquatherm].”
—Ray Harner, Owner, Harner Plumbing, Mantua, OH

A SUSTAINABLE SOLUTION FOR AN EFFICIENT SYSTEM

Fully recyclable, Aquatherm Blue Pipe was developed for hydronic heating, chilled water, geothermal, and industrial applications. All Aquatherm PP-R piping systems offer exceptional chemical purity and a flexible physical strength that differs from other piping systems; they are non-corroding, so they won’t break down, weaken, or scale like metallic piping systems. A uniquely stable material, Aquatherm PP-R won’t react with water, is highly resistant to most chemicals, and doesn’t require chemical maintenance. The piping systems’ 10-year, multimillion-dollar warranty and third-party-certified environmental product declaration (EPD)—which means all Aquatherm PP-R piping systems can directly contribute to LEED v4 credits—are just a couple more reasons why the piping has been so popular in 70-plus countries over the past four decades.

Additionally, Aquatherm PP-R piping systems use reliable heat fusion to form connections; heat fusion bonds both sides of a joint into a single, homogenous material without the use of chemicals, adhesives, or mechanical connections, which eliminates systematic weaknesses and potential fail points in the pipe. The seamless heat-fusion connections, combined with the piping’s resistance to corrosion and abrasion, help ease leakage concerns.

Although “the project originally was specified to be welded, we couldn’t do that in this kind of bank environment,” Harner said. The perfect solution for a sensitive project, heat fusion eliminates toxic materials, glues, and resins as well as fumes and gases and open flames from the piping installation process.

“Not having to use open flames was huge,” Kindbom said.

“Aquatherm is a lot cleaner than steel,” Bejger said. “And this is an office space” where employees work on a daily basis.

The contractor rented McElroy equipment from the local Aquatherm distributor; on the job, the installers used a McElroy Acrobat™ 160 for 2-6 in. pipe sizes as well as a McElroy Acrobat™ 250, a new fusion machine for 2-10 in. pipe sizes that has a compact, lightweight design, allowing operators to fuse pipe easily in tight spaces. Harner Plumbing also invested in three McElroy Socket Fusion Kits and plans to increase tool inventory to accommodate larger pipe diameters.

‘THERE ISN’T MUCH WE CAN’T DO’ WITH AQUATHERM 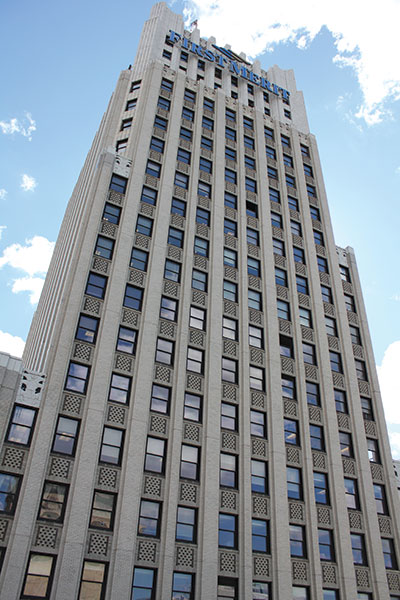 Because of their light weight and sturdy connections in addition to all of heat fusion’s benefits, Aquatherm PP-R piping systems lend themselves well to off – and on-site fabrication.

“We might not have gone after a job like this, especially with this large size of piping, but after a couple of our guys visited the fabrication shop [at the Aquatherm North America headquarters] in Utah, we realized there isn’t much we can’t do [with Aquatherm],” Harner said.

For this project, Aquatherm North America’s Design & Fabrication Services team fabricated some segmented fittings at the Lindon, UT headquarters, but the contractor fabricated even more of the closed-loop piping system at the job-site. Beginning in mid-January 2016, the installers fabricated 180-ft piping runs on FirstMerit’s fifth floor. Before the cooling tower was installed, they used a crane to lift the pipe onto a flat section of roof outside the eighth floor. Four of the installers then slid the piping assemblies as well as a vertical 12-ft piece into place.

“We fabricated whatever we could,” Bejger said. “You really want to do this stuff on the ground.”

Additionally, the men fit 600 ft of 6-in. pipe in 9-ft lengths onto a tiny elevator, and then carried the pipe down a narrow hallway on the 12th floor to position for installation. Doing so with steel would have been impossible. The installers extended a mechanical chase, running the 6-in. supply and return risers in a vertical shaft from the 12th floor to the 26th.

“The nice part about [Aquatherm piping] is it is so light, you can use just a few guys to install two fittings and a full [13-ft] stick,” Bejger said. “With steel, you need a hoist and chain falls,” which certainly isn’t easy and can be a dangerous situation.

Safety is always important on a job-site. Schedule 40 steel often has to be rigged. On this project, Aquatherm PP-R piping’s light weight was a bonus inside the tight mechanical chase. The installers were able to stay on one floor and lower the Aquatherm piping in 60-80 ft sections without having to move. The PP-R piping’s lighter weight and flat edges reduced the risk of injury.

Completed in April 2016, Harner Plumbing had a few things to finish before they could call the job a total success. Part of the project included replacing all of the pumps with high-efficiency VFD versions, but the contractor had a very short window to complete the changeover because the project had to be finished before the cooling season started.

“When we did our exchange, we only had one weekend to take everything down, put the new pumps in, hook everything up, and test it,” Bejger said. “If they hadn’t accomplished the changeover in one weekend, they would have had to rent a chiller, which would have needed hoses, power—one thing after another. They saved $50,000-60,000 by completing the project within a weekend.”

However, no one involved with the project seemed too worried about plumbing problems, at least where the Aquatherm Blue Pipe was concerned.

“The owner was very impressed with the Aquatherm,” Kindbom said. “They could see the joints were good just by looking at them.”

The installers followed all of Aquatherm’s testing procedures, and the piping project experienced zero leaks. Out of all of the various pipe branches and heat-fusion welds, not one drop of water was seen.

“This project changed the way I think about Aquatherm,” Kindbom said. “In the past, we’ve used Aquatherm when we’ve had a hydronic piping project underground, and we never tried using it on a large scale, inside the building as a hydronic system before.”

“We saw some of the intangibles: the less impact Aquatherm makes on a building structure because it’s lighter, which also makes it easier to lift or monkey into small existing spaces; no welding; no odors—all of these things make Aquatherm a great application that we hadn’t thought about in the past but certainly will in the future.”

“This project changed the way I think about Aquatherm. We saw some of the intangibles: the less impact Aquatherm makes on a building structure because it’s lighter, which also makes it easier to lift or monkey into small existing spaces; no welding; no odors—all of these things make Aquatherm a great application that we hadn’t thought about in the past but certainly will in the future.”
—Kevin Kindbom, V.P. and co-owner, Bandwen Williams Kindbom, Akron, OH