San Jacinto College thinks outside the box, both for its students and its facilities

A college with 15 major buildings on its campus was upgrading its aging central utility system, including replacing large amounts of direct-buried pipe

Versatile Aquatherm pipe has minimal expansion and contraction in direct-buried applications, and its light weight also allowed sections to be “unburied” and mounted on the campus’ rooftops

To watch a video about the Aquatherm installation at San Jacinto College South click here. 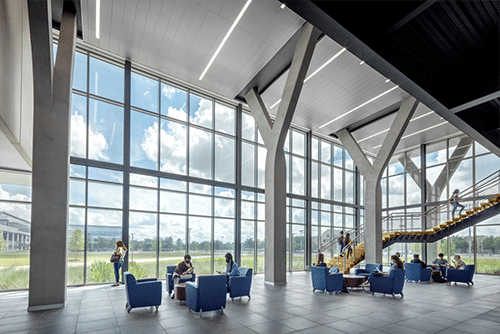 The lobby of the Engineering and Technology Building on the San Jacinto South campus. Photo Credit: Aker Imaging

Perhaps that statement reflects part of the reason San Jacinto is using Aquatherm polypropylene pipe as it upgrades the heating and cooling systems at its South campus. Aquatherm is not a “traditional” pipe, and it is flexible and versatile to handle unique situations and help its users successfully meet their goals.

Founded in 1961, San Jacinto Community College has five instructional delivery locations in Harris County (Houston), TX: three full-service campuses (North, Central, and South) and two growing satellite sites. As of the 2010 census, the population of Harris County was 4,092,459, making it the most populous county in Texas and the third most populous county in the United States. The college serves about 32,000 students at its five sites. 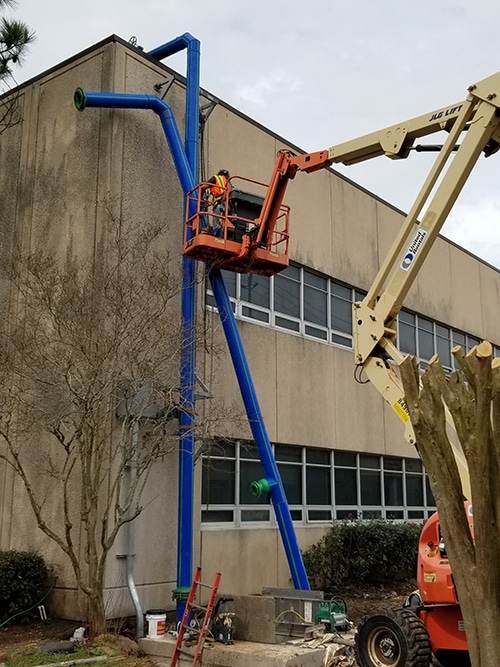 The light weight and ease-of-installation of Aquatherm pipe allowed sections of the chilled water piping loop to be “unburied” and moved to buildings’ roofs.

According to C.D. “Chuck” Smith, P.E., Associate Vice Chancellor, Fiscal Initiatives and Capital Projects, the 13,000 students at the South campus are typical of the diverse nature of the surrounding communities, with more than half identifying as Hispanic, about a quarter white, and about 10 percent each Black or Asian.

“All of our students are taking advantage of the low-cost, high-quality educational opportunities we offer to improve their future earning opportunities,” Smith said. “Most of them work full-time and attend school part-time. And although about 70 percent of them may plan on transferring to a four-year institution, 30 percent of our students are here specifically to earn trade or craft skills credentials.”

“I was a Marine before I did this, and it’s nice when what you do for a living has a sense of mission to it, rather than just going to a job every day,” he said.

TIME FOR AN UPGRADE

The South campus of San Jacinto College consists of 15 major buildings ranging in size from roughly 20,000 to 120,000 sq ft. As the college planned to upgrade the campus’ aging central utility system, it selected Aquatherm pipe for a portion of the new chilled water loop. 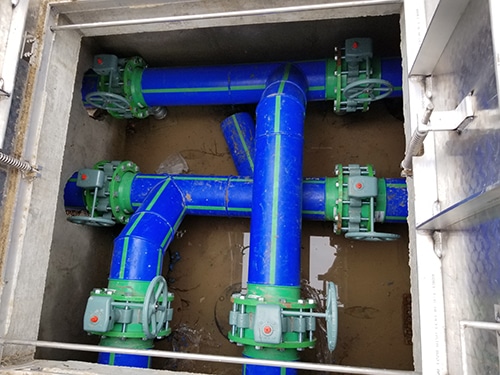 Careful design and off-site fabrication by ISCO meant that Aquatherm pipe could be installed easily and fit precisely in even the tightest spaces.

Smith said the central utility upgrade will not only ensure that the campus is served efficiently well into the future, it also will consolidate and simplify the physical plants on the site.

He explained that the campus originally had a single plant adjacent to the campus’ quadrangle. Over time, this was expanded by the addition of air-cooled chillers, and surrounded by new buildings. The college then added a packaged plant at one corner of its property to support additional growth. The current plan is to add another packaged Canariss plant containing two 600-ton centrifugal chillers and an expansion slot for a third at the opposite corner of the campus. Once operational, the original plants will be removed and the space reclaimed for student use.

“When all is said and done, we’ll have two complimentary plants—and we’ll be able to supply anywhere on campus using a combination of those two plants,” Smith said.

The current system includes a large amount of direct-buried steel pipe, some of which is more than 40 years old. Not surprisingly, buried steel pipe of that age has been experiencing some ongoing problems—especially in the harsh soil of Eastern Texas. 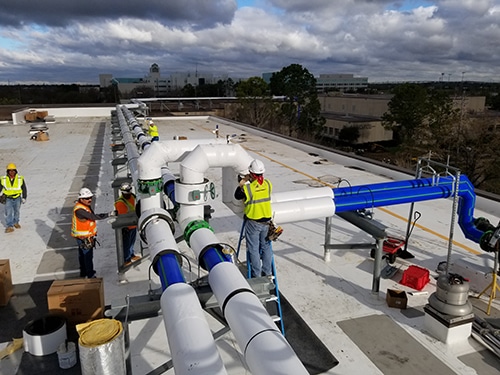 Insulation is applied to the Aquatherm piping mounted on the roof of a building on the San Jacinto College South campus.

“We have highly expansive soils at the South campus, and our buried pipe really takes a beating,” Smith said. “When it rains, the clay in the soil swells, and when it doesn’t rain, the clay shrinks and cracks and puts a lot of stress on the pipe. The combination of corrosion and stress on the pipe from soil movement leads to breakage, which leads to emergency repairs, and those emergency repairs sometimes lead to more soil movement.”

This clearly was a cycle that the college wanted to break.

Smith and the administration at San Jacinto were familiar with Aquatherm pipe from a project recently completed at the college’s North campus, and they knew its toughness, durability, and flexibility would make it a good choice for the direct-buried application at the South campus. In addition, its light weight allowed the college to bring some of the pipe out of the ground and route it along the roofs of the campus’ larger buildings. That decision, Smith noted, made the installation more robust, less subject to the whims of nature, and easier to maintain.

“Predictability is what drives us,” Smith said. “We have to be conscious not only of the first cost but also predictable life cycle costs.”

THE RIGHT CHOICE FOR THE JOB

The San Jacinto College South chilled water upgrades project consists of the installation of 3,500 ft of SDR-11 Aquatherm Blue Pipe®. The 6-in, 10-in, 12-in, and 16-in. Aquatherm pipe is routed across the college’s courtyard, up and over the roofs of three buildings, and across campus, connecting four valve vaults. The first phase of the project includes the installation of 16‐in. piping that will be utilized in the future to tie into the new chilled-water system loop. 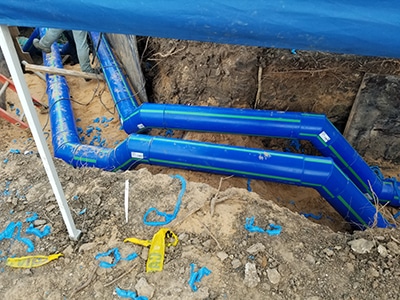 The sections of the Aquatherm pipe that were direct-buried at San Jacinto College South did not require insulation and will last for decades despite the highly expansive soil conditions.

ACR Engineering Inc. designed the system. The firm also had done the design work for the project at the North campus. In that project, in which the piping was installed in an underground tunnel, Aquatherm’s clean heat-fusion joining method, which produces no fumes or VOCs, made it a much safer choice than welding. In addition, the light weight of Aquatherm was again an important factor, this time from a labor perspective, as two installers—instead of the six that would have been required for carbon-steel pipe—could easily carry and maneuver a 20-ft section of pipe in a confined space.

“Some people may have doubts about plastic piping, especially when they’re using it for the first time, but in my opinion this product is fantastic,” said Tanner Bradley, P.E., Senior Engineer, ACR Engineering. “As an engineer, it’s important that the flow you design is going to remain the same over time. Because Aquatherm doesn’t scale or corrode, it maintains the same flow over its entire lifespan.

“In addition, although we have a good water treatment provider at the college, there are some facilities that don’t maintain their water as well,” Bradley added. “Knowing that the pipe won’t corrode if the pH gets a little bit off adds a level of safety and definitely is a benefit.”

THE BENEFITS ADD UP

MCAA (MCA of Texas) member company The Brandt Companies, Houston, has been installing Aquatherm for several years, and Project Manager Stephen Wise said in his two years with the firm he has seen the product’s popularity increase in numerous markets in Texas, including Houston, San Antonio, and Dallas.

Wise said the product’s lifespan of 50+ years is usually the most important consideration for the end-user. From a contractor’s perspective, the labor savings and material handling aspects of Aquatherm pipe represent tremendous benefits compared to carbon steel.

“The heat fusion process is much faster than welding steel, and it’s a much lighter and more nimble product,” Wise said. “Off-site fabrication is another benefit. When you have long, straight runs of pipe, you can have two 19-foot sections of pipe fused into one 38-foot section. That’s one less weld you have to complete in the field. On a direct-buried system you can have the pipe ready to go into the ground faster than you can dig the hole.”

Aquatherm handles changes in pressure very well, as far as underground expansion and contraction, Wise added, and insulation can be omitted in underground chilled water installations if the pipe is bedded with 12-in. of bank sand.

In addition, according to Wise, Aquatherm is very “forgiving” and can be easily maneuvered and manipulated within a given space due to its light weight. It also can be easily custom-configured to meeting challenges in the field.

“Due to the proximity of several existing underground utilities on the San Jacinto campus, there was often only one pathway the piping could be routed, so in some cases we needed to offset it into position of the only free space available,” Wise explained. “There were also several situations that required custom-fabricated spool pieces in order to connect the piping in confined spaces.”

Wise stated that all of Brandt’s installers are trained in the Aquatherm heat-fusion process. For this project, the company used fusion equipment provided by ISCO Industries Inc., Houston, including the McElroy Acrobat™ 160, 250, and 315 fusion machines, and the McElroy QuikFit™ cartridge for the 16-in. pipe.

Brandt took advantage of ISCO’s fabrication services for about 30 percent of the piping installed.

“In the field, we drafted isometric drawings for ISCO to implement into AutoCAD,” Wise said. “Following the approval process, piping was released into fabrication. The quick turnaround process provided solutions in time-critical situations. In addition, the 30-foot piping chases up to the roof were able to be quickly hoisted into place as they arrived as one piece from the ISCO prefabrication facility.”

Will Vodak, Aquatherm Sales Manager, ISCO Industries, noted that ISCO has a nationwide network of fabrication plants, including one just 10 minutes from the San Jacinto jobsite.

“Brandt took the opportunity to prefab as much as possible,” Vodak said. “The light weight of Aquatherm pipe, and the speed at which it can be installed, provided some massive time savings on this project.”

ISCO also was able to send a technician out to the jobsite to help field-fabricate custom spools to fit the tight offsets that Wise described.

“ISCO had fabrication close by, we had fusion equipment close by, we had repair options and backup options for that equipment close by, and we had a technician who was able to produce custom spool offsets on site,” Vodak said. “Brandt took advantage of all these services to install the Aquatherm pipe faster than they thought was going to be possible.” He added that such services are available from ISCO nationwide.

MODULATING COOLING BASED ON NEED

Wise pointed out that an interesting aspect of this project from the engineering and installation standpoint was the replacement of four secondary chilled water pumps followed by the addition of 21 new tertiary pumps on individual air handlers.

“The newly installed tertiary pumps work on a modulating system similar to a control valve,” he said. “Their speed gets ramped up or down in relation to the demand of the zone the individual air handler is serving. Together the secondary and tertiary pumps modulate based on cooling needs throughout the campus.”

READY FOR THE FUTURE

As a college administrator, it’s not surprising that Smith would advise building owners or engineers who are considering Aquatherm to “do their homework.” He also extended a friendly Texas-style invitation to the staff at other educational facilities.

“If you’re considering Aquatherm but you’re unfamiliar with it, come take a look at what we’ve installed and think about how this product could reduce the life cycle cost of ownership in your application,” he said.