Seeking a piping system that could be safely installed in an operating data center, Brigham Young University-Idaho in 2008 selected heat-fused Aquatherm PP pipe The Aquatherm pipe installed in the data center has remained leak- and trouble-free for 13-plus years, and has won the university’s approval for other projects

The Aquatherm pipe installed in the data center has remained leak- and trouble-free for 13-plus years, and has won the university’s approval for other projects

In 2008, when Aquatherm pipe was used during an upgrade of the data center at the Brigham Young University-Idaho (BYU-I) campus, Jedd Walker, who was the BYU-I campus architect at the time, said, “We didn’t want to risk having any leaks at all, and with Aquatherm we knew we’d get a weld that would keep the product together without any failures–forever.”

Thirteen years later, Walker would be pleased to know that his vision for the Aquatherm pipe that was installed on his watch has held true—much to the delight of Craig Forbush, the university’s mechanical operations supervisor. 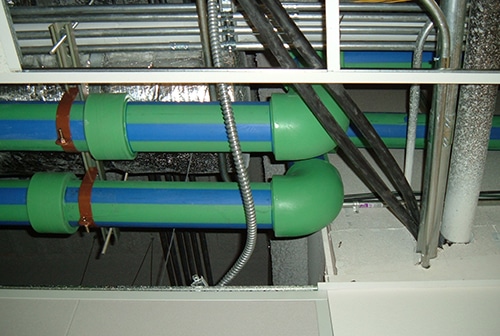 “Aquatherm has been an amazing product for us,” said Forbush, who has been at BYU-I for 31 years. “We haven’t had any issues with it at all.”

In addition, the success of the Aquatherm pipe installation in the data center has led to it being used on a number of other projects on the campus over the years.

“We started putting Aquatherm in our snowmelt systems a few years ago and it has become our standard,” Forbush said. “In direct-buried applications it’s pretty much bulletproof.”

BLUE PIPE GETS THE GREEN LIGHT

By way of background, the BYU-I campus in Rexburg, ID, is home to roughly 12,000 students and includes about 40 buildings on 400 acres. The campus data center is split between two buildings: the two-story Kimball Administration Building, which was built in 1999, and the four-story Smith Building, which also houses classrooms and was built in 1967.

In 2008, the university’s administrators decided to significantly upgrade the school’s IT infrastructure. The project included upgrading the cooling system in the data center. In particular, the university was concerned about high-kilowatt hot spots among the center’s high density racks and equipment.

At the start of the project, Kimball’s data center measured 918 sq ft and Smith’s center was actually an 804 sq ft telephone relay room in the basement. As part of the upgrade, the design and construction staff decided to remove some walls and expand the center—Kimball by 407 sq ft and Smith by 415 sq ft.

In addition to selecting the cooling equipment ­—APC by Schneider Electric in-row RC products and ArctiChill chillers—the BYU-I design and construction staff also carefully considered its piping options. Although welded steel pipe was fine for the exterior portions of the system, welding inside the data centers wasn’t an option, as the team didn’t want to risk setting off the fire alarms and sprinkler system.

Colvin Engineering Associates, Inc. presented the option of Aquatherm Blue Pipe® to BYU-I. Blue Pipe, which is made from polypropylene, uses heat-fusion to form permanent connections. Heat fusion bonds both sides of a joint into a single, homogenous material, without the use of chemicals or mechanical connections. This eliminates systemic weaknesses and fail-points in the pipe. The heat fusion connections, combined with polypropylene’s resistance to corrosion and abrasion, eliminated concerns of the pipe leaking.

The rest, as they say, is history.

The chilled water systems that serve the data center at BYU-I use 4-in.  Aquatherm Blue Pipe®.   According to Forbush, the systems run at about 40 lbs of pressure, with supply water temperatures in the 15 to 20°F range, and returns running about 45 to 50°F.

During installation, the contractor found lightweight Aquatherm pipe easier to work with than steel, and the pipe’s natural R-value reduced the insulation requirements. In operation, Aquatherm pipe, which is hydrophobic and will not corrode or scale, helps reduce O&M costs by reducing the need for water treatment chemicals.

Aquatherm’s heat fusion delivered long-lasting pipe connections without an open flame, meeting the system designers’ desire to avoid welding steel pipe in an operational data center. The entire upgrade took about two-and-a-half months and all the equipment and piping was installed and integrated with no system downtime.

“I feel like [the snowmelt] system, like the chilled water system, is going to last for a long time,” Forbush said. “They’ll replace the concrete and we won’t even touch the main line.”

As the team at BYU-I discovered, and as contractors and engineers continue to discover every day, Aquatherm’s versatility, ease of installation, and longevity make it suitable for a wide range of heating and cooling projects. And although data centers and snowmelt systems are important, Forbush said the use of Aquatherm pipe in those applications led to the solution to a problem that had vexed the university for years—and one that is much more fun than those other applications. 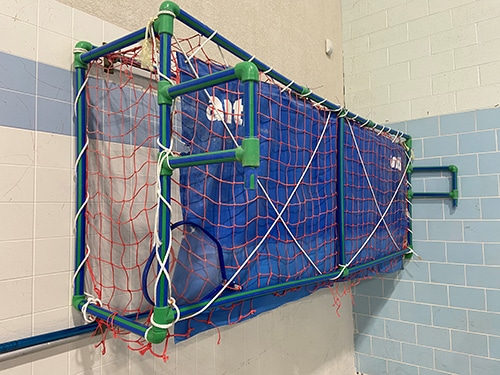 An unexpected discovery made at BYU-Idaho: Aquatherm pipe makes the best water polo goals ever!

“Water polo is very popular here, and for years we couldn’t come up with a good material for the goals,” Forbush said. “Nothing held up. Steel rusted, and PVC kept breaking. Then we  fabricated goals out of Aquatherm pipe. That was at least 10 years ago and we haven’t had a problem since.”

From heating for snowmelt to cooling for data centers to goals for water polo, Aquatherm scores!

San Jacinto College thinks outside the box, both for its students and its facilities