Aquatherm’s polypropylene-random (PP-R) pipe provided cost savings along with a reliable solution for the potable piping.

The original 85 year-old school required a substantial amount of water distribution piping to be retrofitted and newly installed while qualifying for LEED certification.

Aquatherm’s polypropylene-random (PP-R) pipe provided cost savings along with a reliable solution for the potable piping.

Stroudsburg High School, in the Borough of Stroudsburg, PA, serves approximately 1,550 students in grades 10-12, with 110 professional staff members and 35 support staff. Located in the county seat of Monroe County, the high school offers a rigorous curriculum that challenges the students’ academic capabilities. 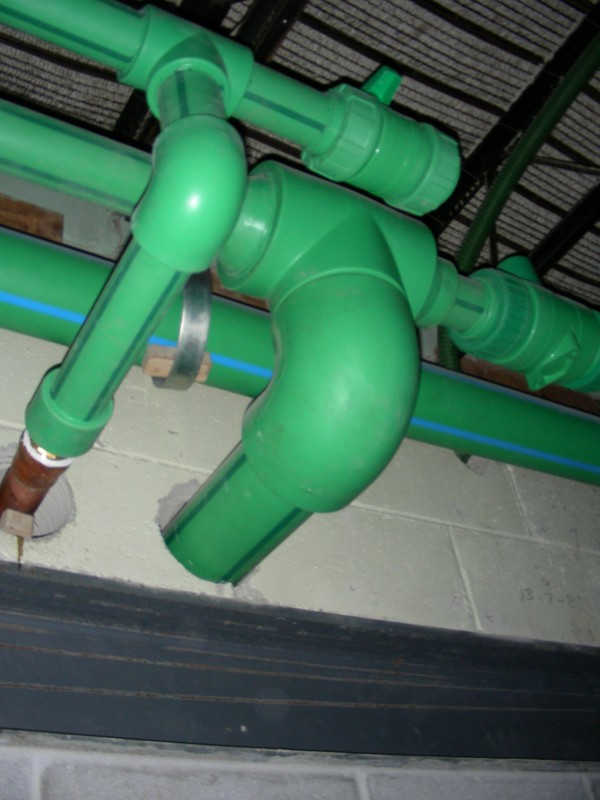 The 132,890-square-foot school building was originally constructed in 1927, with additions totaling 206,695 square-feet built in 1954, 1960, and 1989. However, in the last several years due to the building’s age, portable trailers had to be utilized and new classrooms, a cafeteria, gym, science room, technical education center, media center, auditorium/band area, and administration offices were needed. In 2011, the school board approved a three-phase, three-year project with LEED certification stated as a goal.

Since the facility’s plumbing and mechanical infrastructure was in dire need of an overhaul, that aspect of the construction would play a key role in the project. With a substantial amount of water distribution piping to be retrofitted and newly installed, David B. Strunk, PE, CPD, CEM, and principal of Strunk-Albert Engineering, (East Stroudsburg), was interested in looking at a nontraditional piping option.

Over the last 25 years, Strunk-Albert has built a reputation for mechanical and electrical design expertise throughout Pennsylvania and New Jersey (and other states), and the firm embraces state-of-the-art design technology. Strunk had been introduced Aquatherm Inc.’s polypropylene-random (PP-R) pressure pipe in late 2009 by Eric Martin, with local Aquatherm manufacturer’s rep, James Martin Company, based in Bensalem, PA.

Having been in the industry for 25 years, Strunk didn’t hesitate to investigate PP-R. “I was familiar with polypropylene since we have used it for natural-gas piping and acid waste, so it’s not like it’s never been used here before, it’s just that it hasn’t been used for this application.”

He realized that the German-manufactured Aquatherm Green Pipe would be an ideal solution to a lot of the problems his firm faces on jobsites and a particularly a good solution for Stroudbsurg. “Aquatherm is cheaper than copper and you don’t have to worry about someone stealing it from the jobsite, which is always a concern,” Strunk said. “Also, whether you’re talking about steel or copper, you can have corrosion issues and a build-up of minerals attaching to the walls of the pipe.”

Since Aquatherm is corrosion- and rust-proof, those issues were automatically removed from the list of concerns. Additionally, Strunk explained that 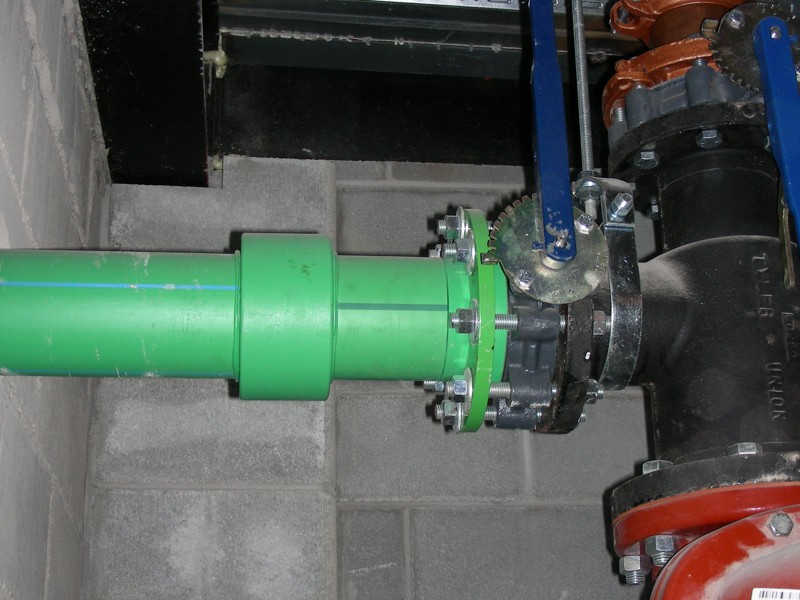 he was also impressed with the ability to easily tie-in to the pipe and do repairs using Aquatherm’s fusion outlets. The fusion outlets are huge labor savers since they allow installers to simply drill into the supply pipe, then heat fuse the fusion outlet fitting into place wherever needed.

The heat fusion welding process is essential to Aquatherm’s PP-R piping systems, which have been proven in 70 countries for nearly four decades. The pipe and desired fitting are simply inserted onto an Aquatherm welding device and heated for a specified time (typically only seconds), then joined together.

Once fused, pipes and fittings have the same physical properties, eliminating systematic weaknesses. Additionally, a faser-composite fiberglass layer in the pipe reduces linear expansion of the pipe by 75% compared to other plastics, and ensures that it hangs rigidly.

Strunk presented Aquatherm to the project construction manager, the district superintendent and the facilities director and gave his impressions of the system. They all agreed to add it as an alternate bid for the domestic water supply piping on the job thanks to the product’s previously stated benefits. Ten contractors bid on the job, with Integrity Mechanical, Inc. (Plumsteadville, PA) winning the bid. Integrity brought over 15 years of public job experience in MEP construction to the project.

The heat fusion welding equipment was included in the bid, which specified that the school district could keep the heat-fusion tools at the end of the job. Additionally, Integrity bought its own heat fusion tools and its installers participated in a half-day training session, which qualified the installation for Aquatherm’s unmatched 10-year, multimillion-dollar warranty covering everything from property damages to incidentals.

Mark Kehs, plumbing supervisor with Integrity, explained that while there was some apprehension about using a product new to the company, James Martin Company and Aquatherm provided excellent training and support, which helped immensely. He added that the crew of three doing the Aquatherm installation hadn’t had any leaks at all through the first several months of the job.

Kehs said the time savings that the smaller diameter Aquatherm provides are considerable, but his crew has had to install more hangers than copper, which has cut into the labor time. “But another benefit is that you don’t have to clean and paste and solder the pipe so that helps a bit, and if you don’t have to insulate that would help, but we were directed to insulate it on this job even though it might not have been necessary,” he added. Aquatherm has a natural R-value of 1 or more depending on pipe size and SDR (standard dimension ratio) and in many cases doesn’t require insulation.

Four-inch Aquatherm Green Pipe was used for the cold water mains, with 2 ½-inch hot water mains and 2-inch hot water returns. Some sections of the job involved using 140-foot sections of 2- and 2 ½- inch prefabricated Green Pipe, which was lifted by four installers and fed through hangers. The 4-inch lines were prefabbed and hung in 52-foot sections. Domestic hot water is generated by a Patterson-Kelley storage tank with a hot water tube bundle. Hot water is supplied by high efficiency AERCO boilers.

As of November 2011, 5,700 feet of Aquatherm in sizes ranging from ½-inch to four-inch had been installed. “The bottom line is that we have managed to stay ahead on the project and that’s important,” Kehs added. Indeed, Phase One of the project has been running smoothly. Phase Two is expected to begin in early 2012, with an estimated 1,900 feet of Aquatherm expected to be used there.

THE FOLLOW-UP FILES: AQUATHERM STANDS THE TEST OF TIME IN CHEMICAL TRANSPORT APPLICATION