Heat-fused Aquatherm Blue Pipe® installed in a trench beneath the floor, with fittings emerging at intervals for machine hook-ups, provided the toughness and versatility this customer desired

It is often said that adversity builds character. But in some cases, it also helps build a better piping system.

During a cold and snowy snap in the winter of 2017-2018, a combination of a heavy snowpack and high winds caused a portion of the roof to collapse at the headquarters of IVP Plastics in Washington, IL. Fortunately, no one was injured (the collapse took place on a Saturday), and the damage was somewhat mitigated by the presence of a crane rail running the length of the ceiling. 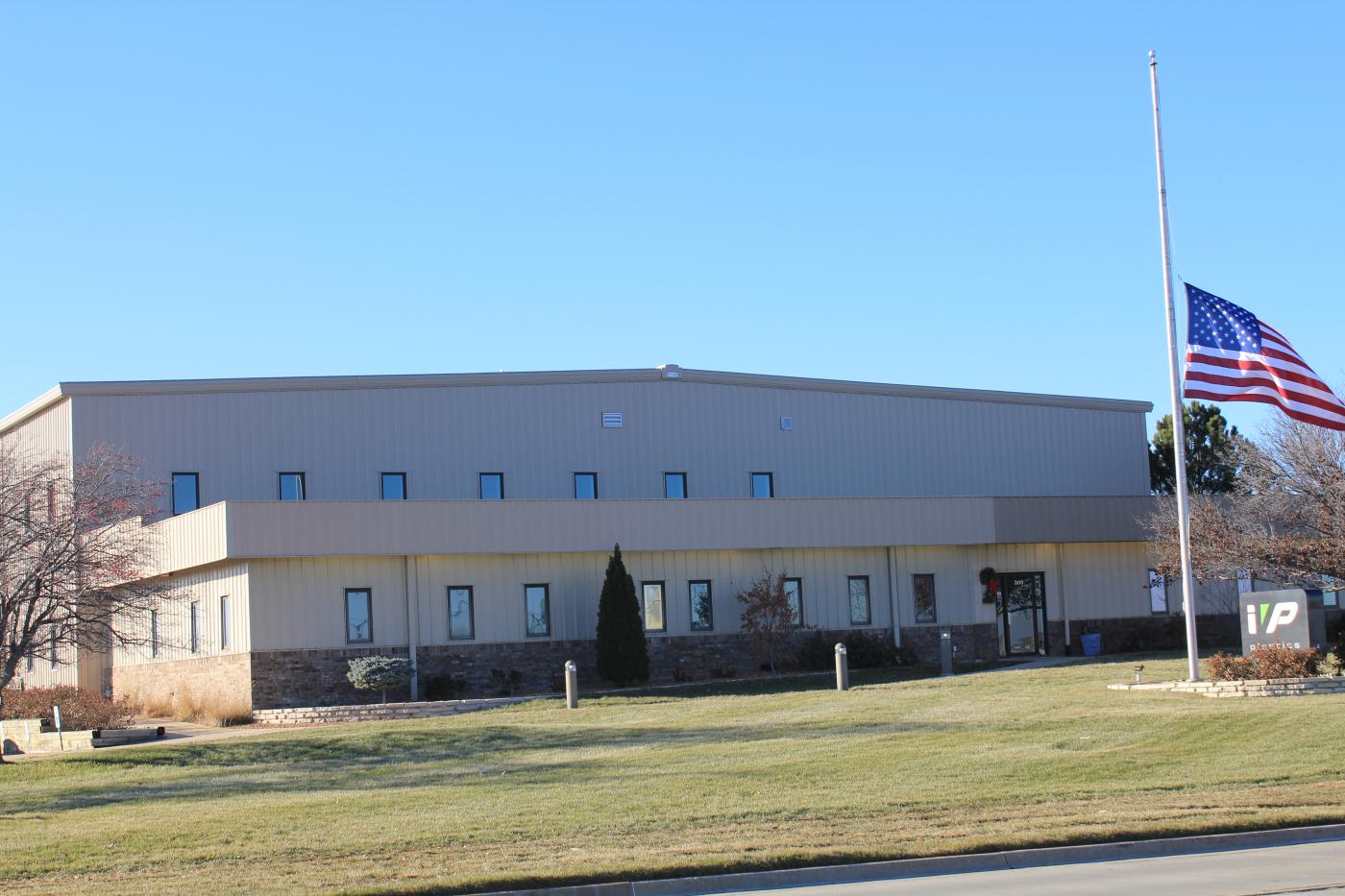 The headquarters of IVP Plastics in Washington, IL.

In the bigger picture, this bit of adversity wrought by Mother Nature served to introduce IVP Plastics to Aquatherm polypropylene pipe — and who better than a plastics manufacturing company to benefit from the advantages offered by Aquatherm piping?

IVP Plastics was founded in 1953 and today is a leading provider of customized plastic parts for the agricultural, heavy equipment, and automotive industries. The company’s services include consultation, design, prototyping, and material management, and its manufacturing capabilities include thermoplastic molding, injection molding, insert molding, in-mold labeling, and sonic welding. The company’s mission is to provide outstanding customer service based on three core values: innovation, value, and performance.

Fate reared its head at IVP Plastics on the afternoon of March 24, 2018. Central Illinois’ winter weather can be notoriously brutal, and a late-season storm took its toll on the 20,000-sq-ft clear-span building. Although damage to the building itself was significant, the crane rail spared much of the manufacturing equipment from serious damage.

About two weeks after the collapse, while a general contractor was still shoring up the building, Jeff Frieden, president of Warner Mechanical LLC, Edwards, IL, had an opportunity to visit the damaged manufacturing facility. 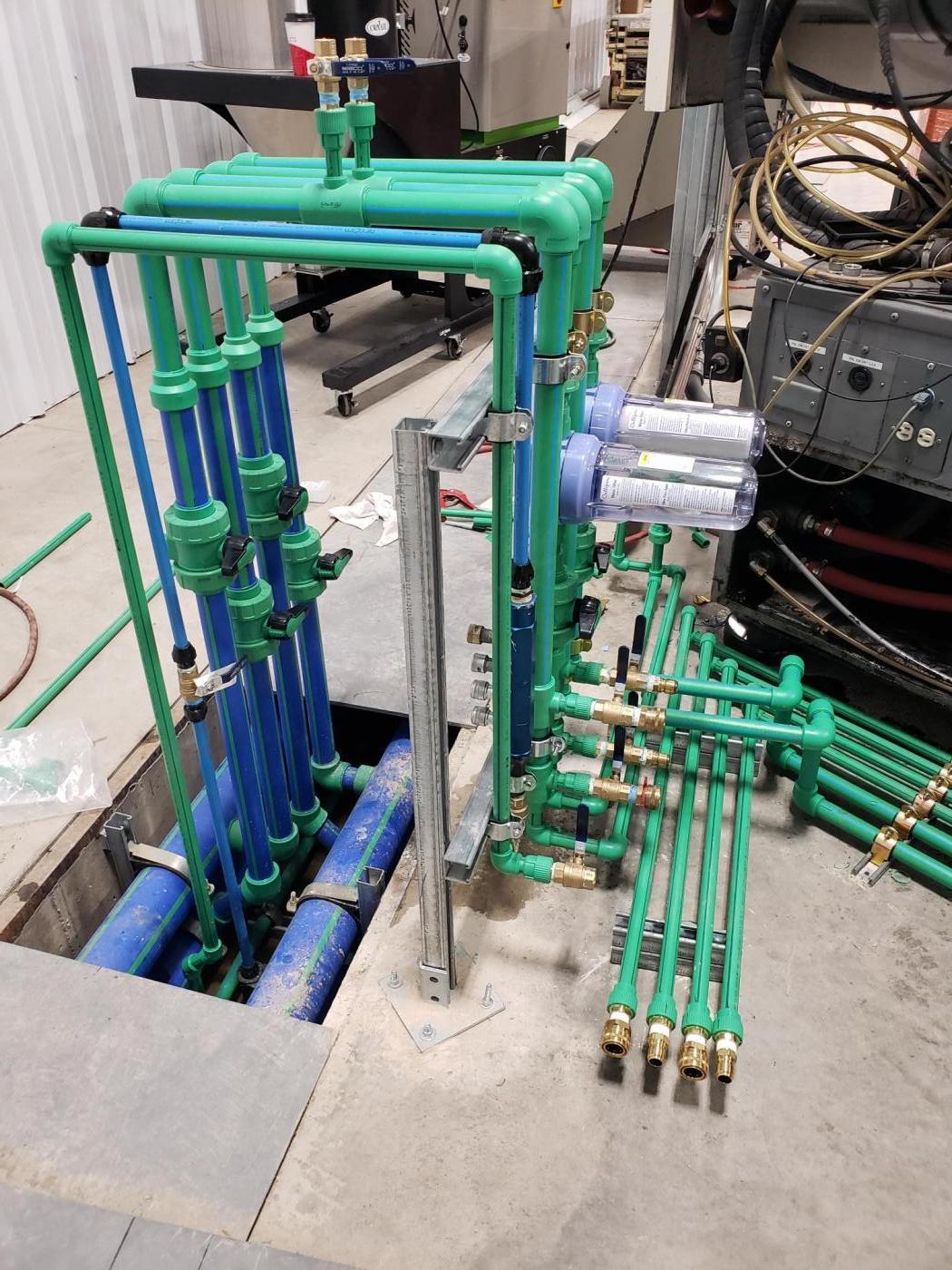 An underfloor trench system with above-floor fittings offers IVP Plastics the versatility they needed for their manufacturing processes.

“We sat down with the IVP Plastics team, the general contractor, and the insurance company, and the bottom line was that time was of the essence,” Frieden said. “Another contractor had put together a temporary chiller system to keep them in production, but the long-term solution was to take the building down.”

Once the decision was made replace the damaged building with a new one, IVP Plastics requested that Warner Mechanical design the process piping system for the 16 machines that would be moving into the new building. The old process cooling system had used 6-in PVC pipe running overhead at the ceiling, and the company said it preferred a system that would place the pipe in mechanical trenches behind each run of machines.

Frieden immediately knew Aquatherm would be a good choice for such a piping application, and IVP Plastics’ management agreed — not surprising for a company with a mission statement built on innovation, value, and performance.

Frieden turned to Warner Mechanical’s partner, Columbia Pipe and Supply Co., Peoria, IL. Columbia supplied 1,575-ft of 4-in., 247-ft of 3-in., and 156-ft of 1½-in. Aquatherm SDR-11 MF Blue Pipe® for the process chiller piping, as well as 507-ft of 1-in. Aquatherm Green Pipe® for clean-up water. Columbia also supplied the necessary fittings, flanges, fusion outlets, and transitions. Warner Mechanical owns the McElroy ½-in. to 4-in. fusion irons that were used on this project, but Columbia provides butt fusion tools for projects that require larger sizes.

“Columbia Pipe is very supportive of having all the tooling we need for projects,” Frieden noted. “We’ve never had to wait on tools.”

THE JOYS OF LEAK-FREE PERFORMANCE

The system designed by Warner Mechanical, with support from Keith Engineering Design Inc., Peoria, IL, calls for most of the pipe to be located in trenches under the equipment in the concrete floor of IVP Plastics’ new manufacturing facility. Fittings emerging from the trench covers allow the manufacturing machines to be easily hooked up whenever the process line is reconfigured. The company’s Budzar chiller provides 40°F cooling water to the machines, with return water flowing through the Aquatherm pipe at up to 100°F.

“We decided to do things differently at the new facility,” explained Joe Camp, engineering manager, IVP Plastics. “We wanted to put the process plumbing in the floor and it was Jeff’s recommendation to use the Aquatherm pipe for that. It will be nice to not have pipes sweating and dripping, which was a problem when we had the PVC overhead.

“Another nice feature of the Aquatherm pipe was that we could get longer continuous lengths of pipe, so we had fewer joints to deal with,” Camp added. 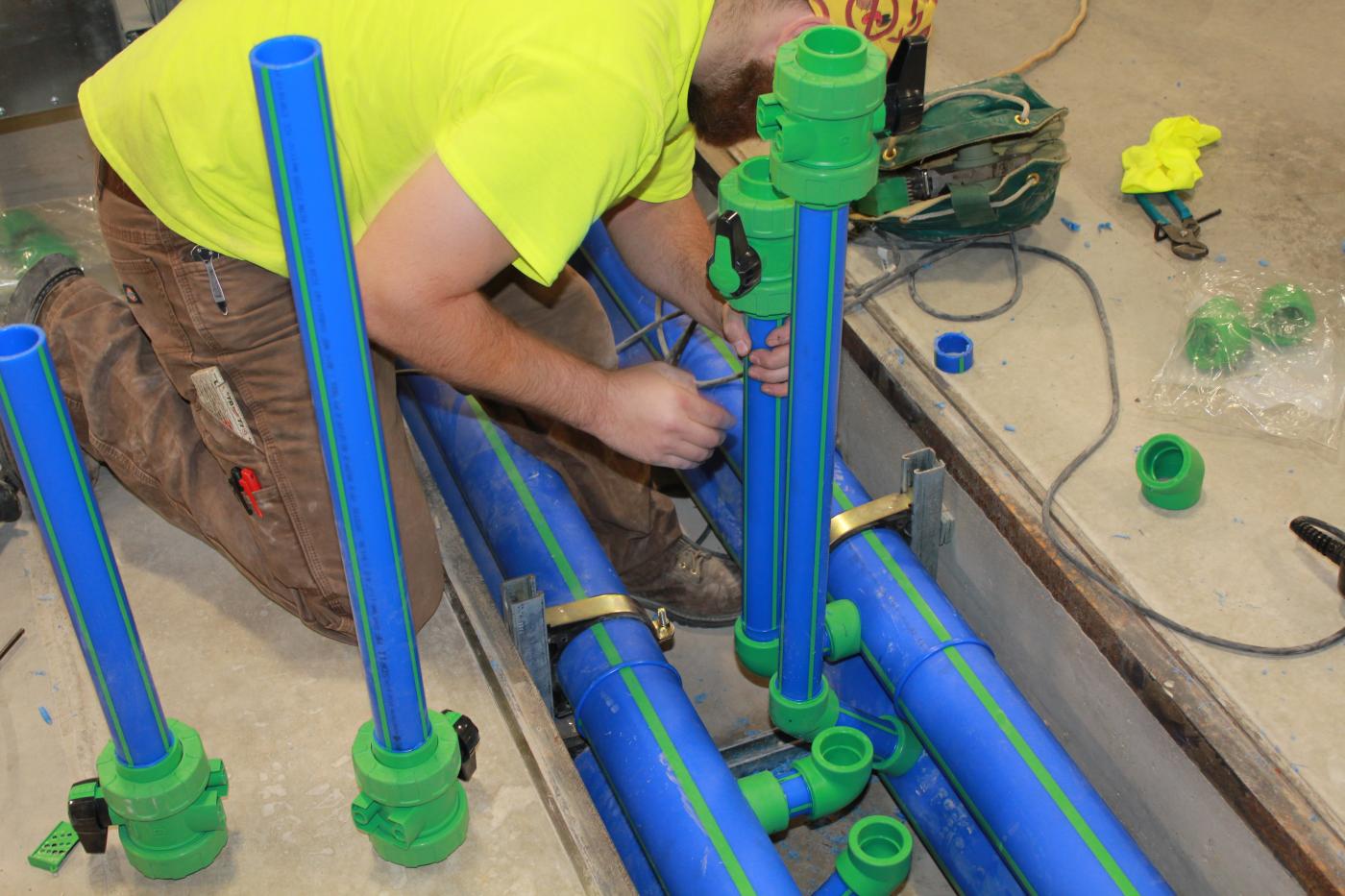 Aquatherm pipe being installed at IVP Plastics. The plant’s manufacturing machines may be moved into place and hooked up to the process cooling system as necessary.

The clincher for IVP Plastics, according to Camp, was Aquatherm’s virtually leak-fee performance that — because it was installed by Aquatherm-trained technicians — is backed by an extensive and comprehensive 10-year warranty.

“There is definitely peace of mind that comes from investing in a product with a warranty like that,” Camp said.

For Warner Mechanical, an undeniably interesting aspect of this project was installing Aquatherm pipe in a plastics manufacturing facility.

“As we discussed this project with IVP Plastics, the owners were very pleased to see the range of temperatures and pressure ratings that were available to them,” Frieden said. “After our initial conversations the owners researched it themselves and were very impressed by what they saw. When you’re working with a plastics company and they’re researching plastics, you’re playing with experts.”

Once the project began, the installation of the Aquatherm pipe attracted a great deal of attention from the IVP Plastics personnel.

“The engineers were watching us put this in, and it really intrigued them — being a plastics company — that we were putting this thermoplastic piping in their building,” Frieden said. “The engineers liked the heat fusion process, and they all came out of their offices and took a peek. Some were familiar with solvent-weld types of plastic, but once they saw the benefits of the heat-fusion welding process they had total confidence in the durability of the product. They can understand when it’s properly heat-fused there will be no leakage problems.” 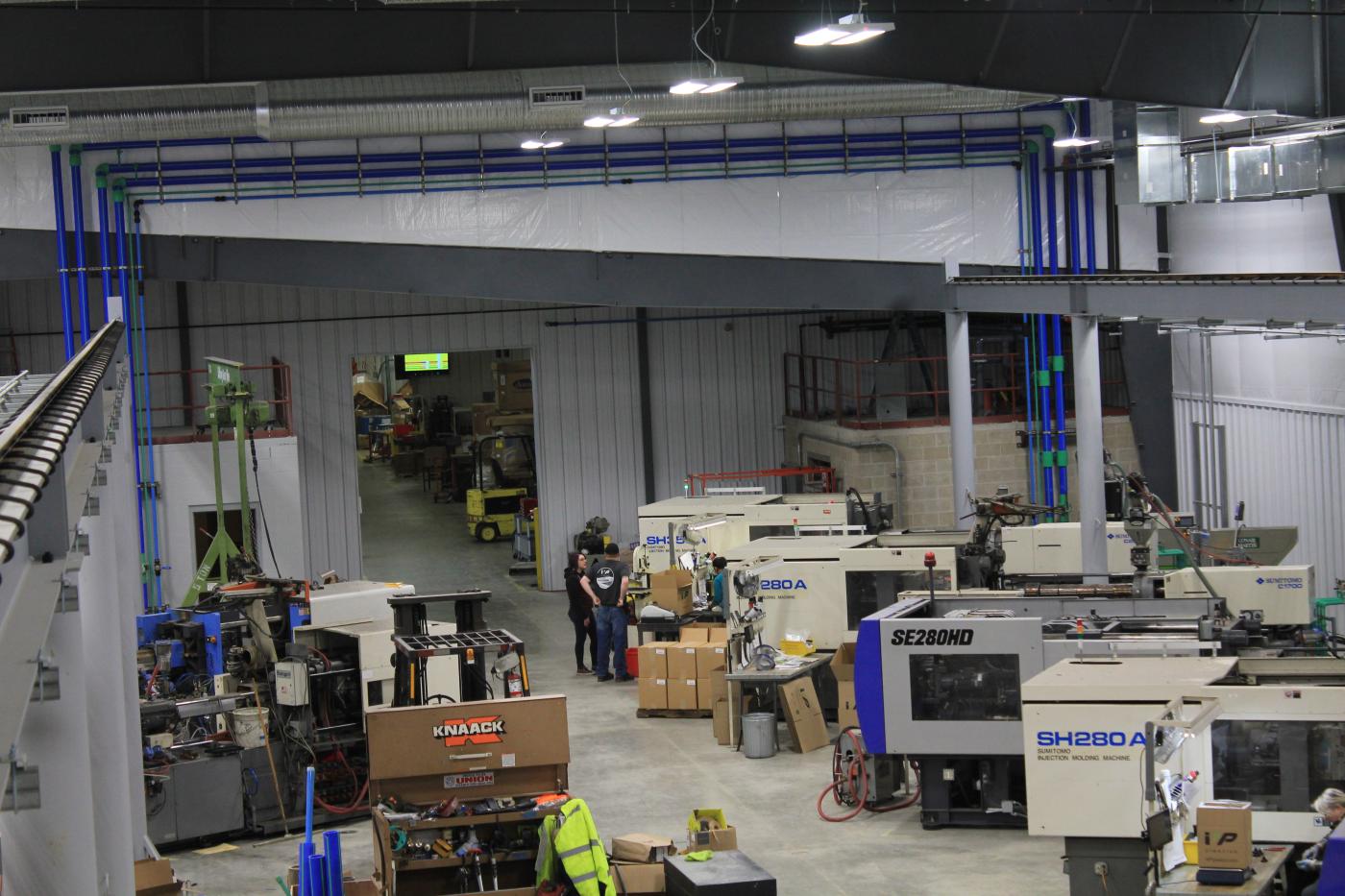 Camp agreed and noted one other benefit of the new piping system: it just flat-out looks good.

“Most of it is buried, but there are sections where it runs up a wall or transitions from one trench to another, and it’s got that nice pop of blue,” he said. “When we bring a guest or customer through they’re pretty impressed with it.”

Frieden added that Aquatherm was much easier to heat-fuse and place in the trenches than metal pipe would have been.

“I think any time you’re in a process where you would typically turn to welded piping, you should look at the time savings and durability of Aquatherm pipe,” he said. “For this customer, using Aquatherm enabled us to reduce the time it took to complete the system and allow the owner to start production.

“I also really think it’s a great choice any time you’re in a buried or constrained space,” he concluded. “It’s easier to work with than metal pipe and it offers a big advantage in peace of mind. You know you can walk away from it when the job’s complete and not worry about leaks.”