THE FOLLOW-UP FILES: AN EPIC SAGA AT EPIC BREWING - Aquatherm

Like any good brewmaster and restauranteur, Epic Brewing Company’s Jordan Schupbach knows that the highest compliment he can receive is repeat business.

That’s why Schupbach, Director of Brewing Operations, has been gratified by Epic’s ongoing success. The company, which was founded in Salt Lake City in 2009, has grown steadily (and rapidly) and recently opened a new and much larger brewing operation and restaurant in Denver. The steady stream of both regulars and new customers at both locations, as well as the amount of Epic beer being sold across the country, is a testament to Epic’s popularity.

Since its opening in 2012, Epic Brewing Co. in Denver has expanded from eight fermentation tanks to 27. Branch lines with versatile Aquatherm pipe have been an integral part of that expansion.

In the same way, Aquatherm is proud to have earned Epic’s repeat business. Aquatherm pipe was selected by the brewery for its glycol lines in Salt Lake City, and again for the new facility in Denver. Aquatherm was then selected again for a major expansion of the  Denver operation.

THE IMPORTANCE OF GLYCOL IN BREWING

For those who aren’t familiar with the art of brewing beer, certain parts of the brewing process require temperatures as low as 24°F. This requires brewers to use glycol in lines that connect the process chillers to the fermenting vats. They key is to find a material that can transport the chilled fluid without using fluxes or glues, as the flux used when brazing copper can cause impurities in the line and glycol can degrade the glue that is used to join certain piping materials (such as CPVC). That makes Aquatherm polypropylene pipe an ideal fit.

Aquatherm is a glue-less high-pressure system that delivers some of the best attributes of both metal and plastic piping in one versatile system. The highly engineered pipe is connected via heat fusion, which bonds both sides of a joint into a single, homogenous material without the use of toxic chemicals or mechanical connections, eliminating systemic weaknesses and fail-points in the pipe.

Aquatherm pipe is corrosion- and chemical-resistant, inert to most common chemicals, and has high environmental compatibility. 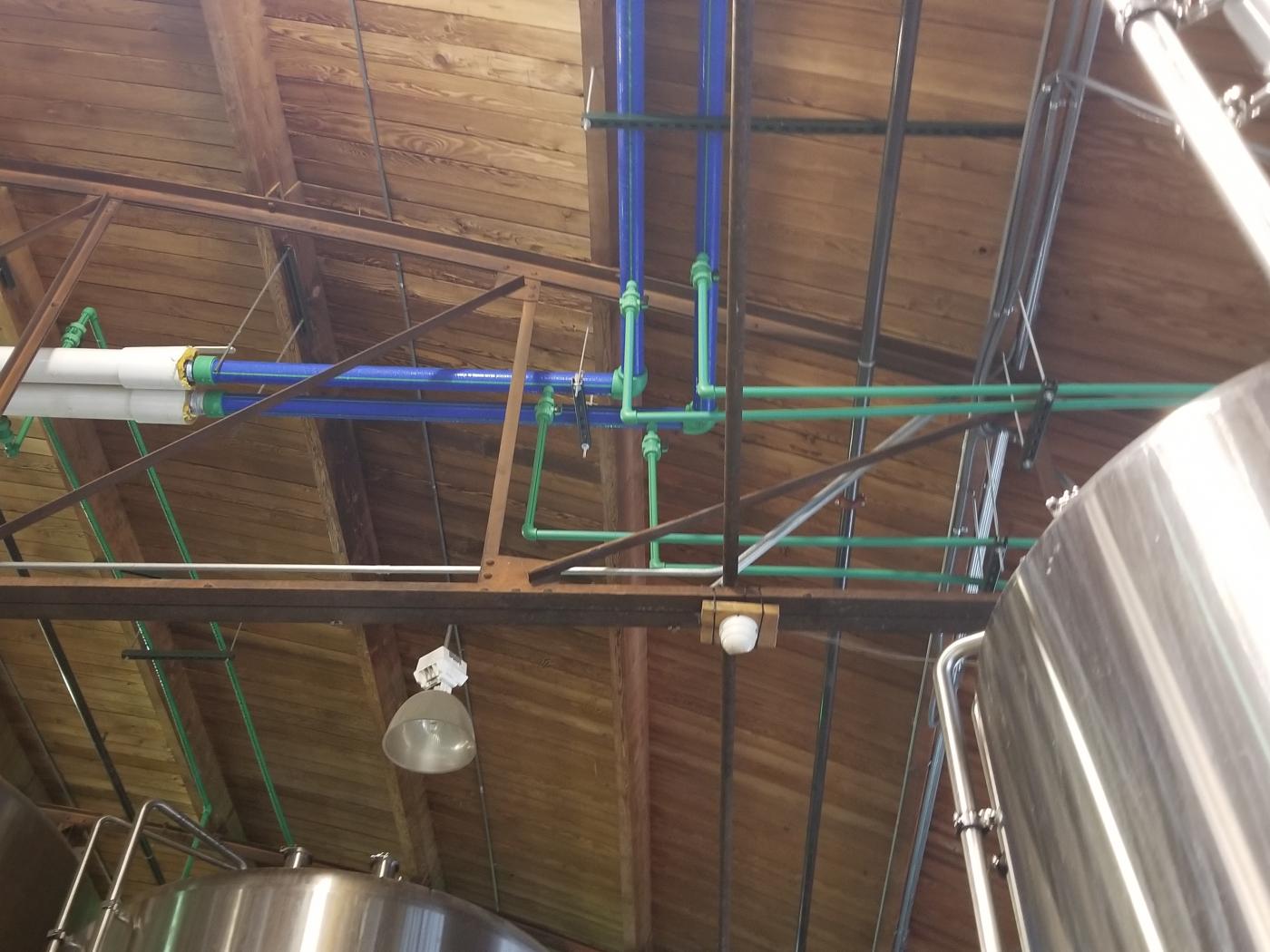 The light weight of Aquatherm pipe made it easy for one person to install, even when working overhead.

Like most craft breweries, Epic was founded by beer lovers – not piping experts. The company selected Aquatherm for its first brewpub based on the advice of Pond’s Plumbing of North Salt Lake City. Pond’s installed roughly 150 ft of 2-in. Aquatherm Blue Pipe® running from the original chillers to the fermentation vats in 2009. The company also installed Aquatherm for major updates and expansions at the fast-growing brewery in 2011 and 2012. (See our previous case study with Epic Brewing Co. here: aquatherm.com/case-studies/fast-growing-brewery-taps-emerging-pipe-system-for-chilled-glycol-distribution.

When it came time to open a new brewing operation in Denver in 2012, Epic sought out Aquatherm for the glycol piping for an initial run of 8 fermentation tanks, and again for expansions that have more than tripled that number to 27.

Today, according to Schupbach, the Salt Lake City facility is producing about 10,000 barrels of beer annually. One barrel is equal to 31 gallons — or two kegs — of beer. The Denver facility produces about double that amount, and companywide the total is about 28,000 beer barrels per year. The company now ships beer to 25 states.

All that growth doesn’t come without challenges, but one thing Schupbach does not lose sleep over is his breweries’ piping systems.

“Aquatherm is a super-reliable product,” he said. “It’s very easy to add on to when we expand, and there are experienced companies in both Salt Lake and Denver that are capable of installing and insulating it. It’s definitely something that I would recommend to other brewers — not that I want to give away any of our secrets.”

BENEFITS TO THE BREWER AND THE CONTRACTOR

Todd Ramer, Service Manager, Major Heating & Air Conditioning, Denver, said Major— which has five technicians trained on Aquatherm heat fusion­—has been working with Epic for more than three years, and over that time has helped the Denver facility expand its operations with hundreds of feet of Aquatherm pipe.

Ramer said Aquatherm piping offers many benefits for not only the brewer but also the installing contractor, including light weight and installation time savings.

“From a contractor’s perspective it really beats running steel or copper,” Ramer said. “It’s so lightweight that I can fabricate and hang the 3-inch mains by myself. But the biggest thing is the time saved. It’s astronomical compared to welding and brazing. I knocked out the latest expansion at Epic in a week and a half. If I had done it welding steel, it would have been three or four weeks.”

Aquatherm pipe transports chilled glycol from the process chiller to the fermentation tanks at Epic Brewing Co. in Denver.

Ramer also noted that tapping into existing lines is easy with Aquatherm. During the recent expansion,  in addition to the socket and butt fusions he used to join the pipes, he estimated that he performed about 200 saddle fusions.

“It’s much easier to do expansions of existing Aquatherm lines than steel lines,” he noted.

And the system has been basically leak-free since day one — with the exception of some human intervention.

“If you ever have to do a repair with Aquatherm it takes a quarter of the time it would take to weld steel or braze copper,” he said. “Shortly after we had completed the expansion at Epic, a forklift operator dropped a beer barrel on a 3-inch glycol main and fractured it. Epic called us at 3:00 p.m. and we had them up and running again by 5:00 p.m. We just cut out the damaged section and fused in the replacement section.”

“Using Aquatherm allowed us to cut our insulation from one-inch thick to one-half inch,” he said. “That not only saves money, it also is much easier to work with. Insulating pipe is nobody’s favorite part of the job.”

‘NO REASON TO CHANGE’

Looking ahead, Ramer said Major has already begun work on a project in which Aquatherm Blue Pipe® will be used for the geothermal mains at a church in the Denver area.

Epic, meanwhile, is never standing still and recently acquired Telegraph Brewing in Santa Barbara, CA. If the recently purchased brewhouse ever expands or needs new piping, Schupbach knows which way he will go.

“For us, it’s been all Aquatherm ever since we had it installed in Salt Lake City,” he said. “It’s a product we’re familiar with and totally satisfied with, so there’s no reason to change.”