AN EXTRAORDINARY RETROFIT FOR THE STANDARD BUILDING - Aquatherm

AN EXTRAORDINARY RETROFIT FOR THE STANDARD BUILDING

The Aquatherm piping system offered a clean, budget-conscious solution for the Standard Building, with a total material and cost savings of $250,000 compared to steel pipe

Converting an office building built in 1924 into 281 apartments, including new potable water and HVAC piping.

The light weight and ease of use of Aquatherm pipe allowed the pipe to be transported to the top floor where it was fused, and then lowered down the building through the stacked mechanical rooms. 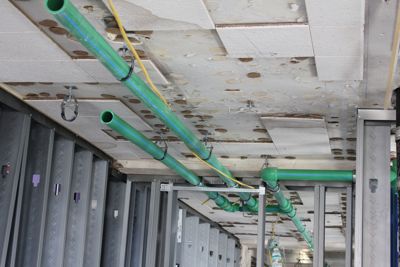 The 20-story, terra cotta Standard Building has graced the cityscape of downtown Cleveland, OH, since 1924. Constructed by The Brotherhood of Locomotive Engineers — the oldest union in the nation — the Standard Building was their Cooperative National Bank Building.

Throughout most of its long life, the Standard Building functioned admirably as an office building in a prime downtown location. Today, the urban trend of office-to-apartment conversions is transforming the business districts of many cities, including Cleveland’s. Weston Inc., the building’s owners, knew the time was right to capitalize on that trend and convert the Standard Building into a completely renovated, 281-unit luxury apartment building.

Begun in April 2016 and completed in December 2017, part of the Standard Building renovation features two revamped piping systems: one for potable water and one for the new comfort system, which includes 290 WaterFurnace water-source heat pumps.

For Lee Tucker, Project Manager, Marous Brothers Construction, the company’s Design/Assist approach at the Standard Building was to “go with what you know.”

“We budgeted the project and negotiated the contract based on what we felt comfortable with,” said Tucker.

“We generally are not early adopters of new products unless we do extensive research. We explored the use of Aquatherm with the mechanical engineer and visited another project of similar size and interviewed the employees of the installing mechanical contractor. After our research, we felt comfortable with using Aquatherm.”

BLUE AND GREEN COME UP GOLDEN

Aquatherm Blue Pipe is ideal for HVAC applications, offering longevity and consistent performance. It is hydrophobic, which means it will not corrode or scale over time.

Aquatherm Green Pipe is chemically inert and is potable water (NSF 61) and food safety (NSF 51) rated. It will not leach, corrode, or erode. In addition, the heat fusion method of joining Aquatherm pipe does not create any VOCs and does not introduce any lead or other toxic materials into the system. Nor does it involve any open flame or hot work permit as does welding carbon steel.

Aquatherm Blue Pipe and Green Pipe are both available with optional multi-layer faser-composite (MF) which allows the pipe to remain rigid at high temperatures and significantly reduces linear expansion. The MF extrusion process creates a middle layer in the pipe that is a mixture of glass fibers and Aquatherm’s proprietary fusiolen. Along with the benefit of reduced expansion, Aquatherm MF pipes are still flexible, and require fewer and smaller expansion controls. 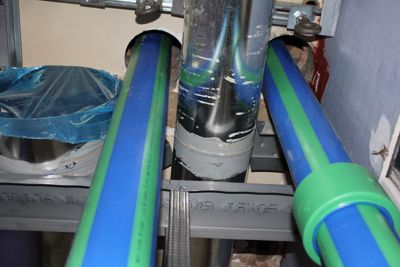 “Construction of the building is unique,” Tucker said. “The floors are actually 18-in. thick per floor.”

The piping contractor, T.H. Martin Inc., would fuse the pipe on the 19th floor and drop it all the way down the building through the stacked mechanical rooms, with core drills. This made the lightweight nature of the pipe critical.

“They just set up on one floor and drop, drop, drop,” Tucker said. “They set up a kind of chain fall. We couldn’t do this with steel pipe.”

“After working with Aquatherm and having installed it, the cleanliness is by far a long-term benefit to wherever you would install it,” said Ryan Pepper, Piping Project Manager, T.H. Martin Inc.

Pepper also noted the light weight is a huge benefit to his crew.

“You’re not moving stuff as heavy so the guys can be more productive all day long. That’s essentially what it comes down to,” he said.

“It’s a lot easier on the guys, on your body,” he said. “It makes it an easier day, and you’re not exhausted at the end of it.”

Aquatherm’s ease of use helped Swaney and the other installers at the Standard Building get the job done quickly and efficiently.

EASE OF USE AND OVERALL SAVINGS

Unlike welding, the heat fusion process used for Aquatherm pipes physically turns the two pieces of plastic pipe into one piece. The heat fusion tools and process are both easy to learn and work with.

The Aquatherm representatives came right out to the jobsite [to provide training],” Swaney noted.

“It’s a very easy system to put together,” Pepper said. “Guys that are used to welding, grooving and even soldering a lot, when they go to do this the tools make it easy. The tooling, combined with the simplicity of how to put it together, really makes it a fantastic product.”

Tucker said the Design/Build contractor on the project provided a credit of $250,000 to Marous Brothers Construction for using Aquatherm piping. The credit was based on the estimated combined labor and material cost savings compared to using metal pipe.

Tucker added that he often expects to see a sort of resistance to new technology, but what he finds is exactly the opposite with Aquatherm.

In the end, a combination of Aquatherm’s light-weight and ease of use in the field made it the clear choice for this renovation project.

“I didn’t just push for Aquatherm, I required it,” Tucker concluded.

The Standard Building is up and running and occupied, and has begun its new life as prime downtown Cleveland apartments. Marous Brothers Construction and T.H. Martin are proud to have played a role in the successful renovation of this historic and beautiful structure, and both companies said they planned to use Aquatherm pipe on other projects in the future.

To view a video about this project, click here.