Even with unique time and space constraints, the mechanical contractor chose Aquatherm PP-R piping systems, and the project was still completed under budget and ahead of schedule.

After four months of repairing leaks, a candy manufacturer finally approved a retrofit on a carbon-steel geothermal loop when a wall shared by an expensive data center was affected.

Even with unique time and space constraints, the mechanical contractor chose Aquatherm PP-R piping systems, and the project still was completed under budget and ahead of schedule.

With an ever-expanding market presence and an annual portfolio with billions of dollars in sales, a privately held manufacturer distributes its confectionery and gum in more than 150 countries. Adding to its success, its U.S. subsidiary produces what are perhaps the company’s best-known candy brands. 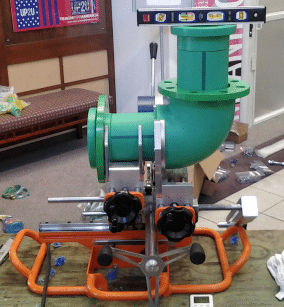 “They had to do something,” noted the mechanical contractor also located in the South Central U.S. “We had been fixing leaks for about four months, and one of the leaks happened in the wall that is shared by its data center. That was the final straw; they couldn’t risk having the leaks anymore. There was very little chemical treatment to start with, which contributed to the pipe system failing, and it started to pit at the fittings in the existing piping, [causing leaking] in the office facilities.”

The candy manufacturer’s facility manager (FM) explained that the original system just wasn’t working. “We had Schedule 10 steel pipe on the original installation, and we had a leak every two weeks,” he recalled. “Every time there was a leak, we had to drain the geothermal system and refill it and restart it each time. It was adding up to a lot of man hours and wasted resources.”

Replacing the building’s entire HVAC system presented a challenge; however, the company would have experienced an even larger financial and maintenance burden had the pipes not been replaced.

Instead, the mechanical contractor used Aquatherm Blue Pipe® for the entire project. “I was a bit concerned with using something new,” said the mechanical contractor’s project manager for the jobsite. “Of course there’s always a learning curve, and people always fear change; but once the Aquatherm guys came in and certified our guys, everybody was like, ‘This is a no brainer.’ The guys really took off with it.”

Fully recyclable polypropylene-random (PP-R) Aquatherm Blue Pipe was developed for hydronic heating, chilled water, geothermal, and industrial applications. An optional faser-composite layer in the pipe reduces linear expansion by up to 75% compared with plastic piping, ensuring that the system can withstand high operating temperatures; the layer also reduces contraction in cold temperatures. Aquatherm PP-R piping systems offer exceptional chemical purity and a revolutionary physical strength that differs from other plastic piping systems, which is why the piping has been so popular in 70-plus countries worldwide over the past four decades.

Aquatherm PP-R piping systems are connected via a heat-fusion welding process that eliminates toxic materials, glues, and resins as well as open flames from the piping installation process. The simple heat-fusion welding technique was a new concept for the American candy manufacturer, but because Aquatherm PP-R piping systems have been used in the company’s European plants, the U.S. subsidiary was somewhat familiar with the concept.

“The available working space was very difficult,” the mechanical contractor said. “This was a total renovation, not a new construction, so it presented some challenges. We had to take the ceiling down and move ductwork and some lighting just to tear out the existing piping. We had some Aquatherm reps that worked with us for a couple of weeks on the fusion part of the installation to make sure it was all set up and done right. It was all done on bench, and we made it up and broke it down each week.”

Because the candy manufacturer’s employees work four 10-hour days each week and are out of the office Fridays through Sundays, the mechanical contractor could perform the retrofit during the three-day windows. “We could go in and shut the system down, drain it, take it apart, install the Aquatherm piping and fittings and put it back in place,” the mechanical contractor explained. “But there were still a lot of unknowns throughout the project timetable: going through offices, walls, floors, moving the furniture, covering everything up, and vacuuming every night as well. And the funny thing is, I don’t even think the employees knew we were there.”

While the facility had some 6-in. steel pipe that was still intact and not leaking, the 4-in. pipe was creating problems; the solution was to replace the pipe and reduce its size by half going into the pump, with 3-in. and 2½-in. Aquatherm Blue Pipe. This downsizing was possible thanks to Aquatherm’s excellent flow rate. (Aquatherm piping systems ranging between 2¼ and 4 in. also were used on the job.)

Because of space limitations in the building, the piping systems for the HVAC renovation were prefabricated in 13-ft lengths on the floor, lifted up, and affixed to the ceiling with flanges and hangers. According to the mechanical contractor, “We used the existing steel supports and also added [a few] because we needed more support with PP-R. On the 13-ft lengths of pipe, we added probably an average of one extra support. So it was challenging. We had to get special fittings to adapt to steel floors above and run some Unistrut® to connect them on there. We knew we couldn’t couple or work in the ceiling, so we used the flange on the Aquatherm pipe, working ahead on each side of the pipe, fusing it as we went.”

The project was completed in August 2012, with more than 715 ft of pipe installed in the retrofit.

“If [the candy manufacturer] hadn’t used Aquatherm,” the mechanical contractor said, “they would have had to use steel again, but they had a bad taste in their mouths about using steel piping as they previously had problems with it. There was nothing wrong with the fittings, as the pitting and leaking was in the grooves on the steel pipe itself.”

As an added benefit, the projected numbers for labor came in under budget, which, of course, is always a bonus during a renovation. Surprisingly, even though the building was available only three days a week, the project finished ahead of schedule as well.

The installation proceeded very smoothly, according to the FM. “We worked with the front-office staff, and [the mechanical contractor] worked Friday, Saturday, and Sunday. We had put together a time and event schedule that had the project taking almost three months, but they were able to cut a month off of that because of how fast they were able to fuse the product and put it together.”

The project has been completed for more than three years, and everyone has been happy with the results. “We haven’t had a single leak since the project was completed,” the FM added. The only complaint arising from the job came from the mechanical contractor’s grandchildren: They were disappointed that the endless supply of free candy samples dried up—just like the leak problems the facility had been experiencing.