A high school campus needed a piping system that could be installed in a new four-story, 40,000 sq. ft. building, on very tight schedule. 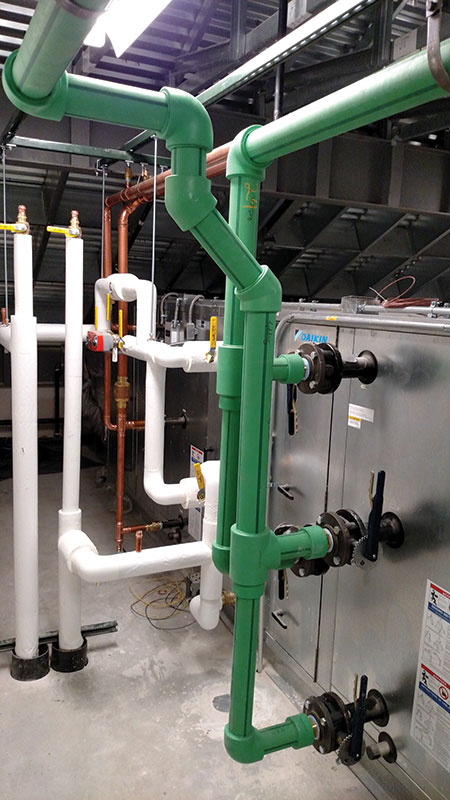 One good job deserves another. In 2013, Aquatherm’s polypropylene-random (PP-R) pipe systems played a key role in the success of direct-bury water-source heat pump pipe at University of Detroit Jesuit High School and Academy (U of D Jesuit). So, when the school began work on an expansion of its campus in 2015, Aquatherm products were actively sought out as an integral component.

Located in inner-city Detroit, U of D Jesuit was founded in 1877. The college preparatory school has prospered through good times and bad by focusing on its founders’ Jesuit values and preparing students to become community leaders.

“Most of us tradesmen in the field are ‘I’ll believe it when I see it’ types. But I will say that after going through the process and the pressure test, I’m more than comfortable installing and recommending Aquatherm pipe”
—Josh Umphrey, Journeyman Pipe Fitter,
John E. Green Co., Highland Park, MI

This commitment to academic excellence, faith, and service has drawn students from the Greater Detroit Area and resulted in a stellar reputation

The all-male school’s mission statement reads, in part, “U of D Jesuit, in collaboration with parents, will challenge its students to go beyond academic excellence, to be reflective, to be committed to the service of personal faith and the promotion of justice: to be ‘Men for Others.’”

The majority of the current campus was built in 1930, and although staff considered leaving the urban site for a new building in the suburbs in the mid-1990s, ultimately the decision was made to commit to the existing campus.

SUCCESSFUL PROJECT IN THE BOOKS 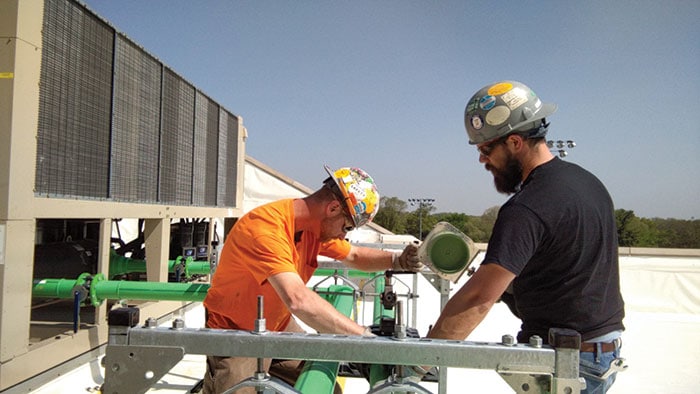 During the 2013 project, 240 ft of 4-in. Aquatherm Blue Pipe® buried in an underground trench served as the supply and return piping that linked the campus’ boiler house to the residence building. The 50,000 sq. ft. building originally had served as the residence for the school’s priests, but now serves as counseling and meeting rooms as well as administration space.

For that project, the school’s engineering staff had called on its long-time mechanical services partner, John E. Green Co., Highland Park, MI, for design-build support. John E. Green was founded in 1909 and is consistently rated as one of the largest, most diversified, full-service union mechanical and fire-suppression contractors in the United States.

Bob Williams, Director of Plant Operations at U of D Jesuit, worked closely with John E. Green’s Mark Bobrowski, Senior Mechanical Engineer-Preconstruction Services, and a U of D Jesuit alumnus.

Using Aquatherm pipe systems in the 2013 project garnered John E. Green much success; The installation is leak-free, will not corrode or leech into the soil, is environmentally friendly—it’s the only system in North America that can directly contribute to LEED v4 credits—and operates efficiently thanks to the inherent insulating properties of the pipe. So when the teams from U of D Jesuit and John E. Green came together again in 2014 to begin planning the construction of the school’s new science building, no other piping options were considered. 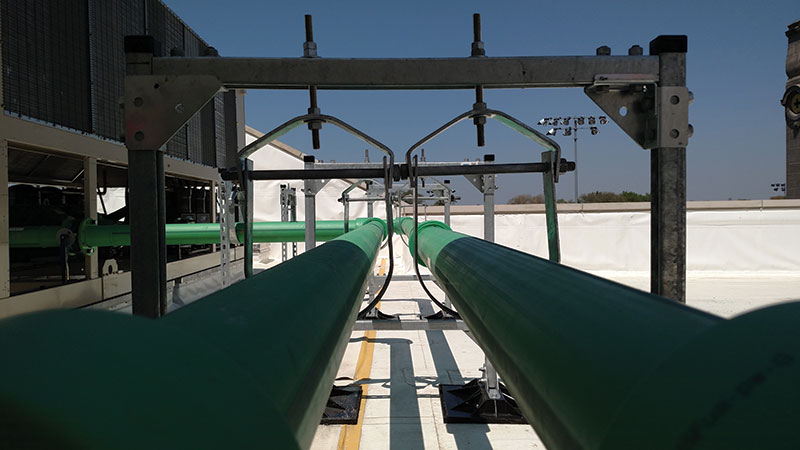 Construction of the new science wing began at the end of the 2015 school year, and the new building will be up and running for the beginning of the 2016-2017 school year.

The four-story, 40,000 sq. ft. STEM (science, technology, engineering, and math) center includes a robotics lab; chemistry, CAD, biology, physics, and learning labs; and houses U of D Jesuit’s Shell Eco-Car program. In this program, which is a particular source of pride for Williams, students design and build a car to compete in the Shell Eco-Marathon. The car is meant to minimize energy use and emissions by using one-third less energy in its lifetime than a typical city car.

“We compete against schools from all across the country, including colleges,” Williams said. “Last year, we beat all of the Michigan schools that were involved in the program, including the University of Michigan.”

Because of the tight schedule, precast concrete was chosen to facilitate the science building’s construction. To condense the installation time to meet the construction schedule and save on labor costs, some sections of the new chilled-water pipe system were fabricated at Aquatherm North America’s Lindon, UT facility. Because of their light weight compared with metal pipe, Aquatherm’s fabricated pieces were carried to the mechanical room on the building’s roof.

Residing on the roof is a 142-ton Daikin air-cooled scroll compressor chiller. The chilled-water system also includes Armstrong pumps and Daikin air-handling units. Tying it all together is Aquatherm SDR 7.4 Green Pipe® in 2-, 2½-, 3-, and 4-in. diameters.

A GREEN LIGHT FOR GREEN PIPE

The system originally was specified with Aquatherm SDR 17.6 Blue Pipe for the 4-in. main pipe runs. Aquatherm recently added a 4-in. pipe size to its SDR 17.6 Blue Pipe product line; previously, a 6-in. was the smallest size available. However, the initial 4-in. inventory sold out quickly. After confirming that the smaller diameter SDR 7.4 pipe still would provide the volume needed for the specified system performance, Aquatherm substituted the higher rated SDR 7.4 Green Pipe for all of the Blue Pipe to keep the job on schedule, rather than make the school wait for the company to restock the 4-in. Blue Pipe.

“Mark Bobrowski reviewed the flow requirements before accepting the higher-priced pipe at a low cost and confirmed that it had the flows he required for his system,” Zatto said. “So now, as an owner, Bob Williams has the benefit of the better insulation with the R-value from the [SDR 7.4 Green Pipe]. That provides ongoing energy savings than if we had provided the [SDR 17.6 Blue Pipe].”

Aquatherm’s heat-fusion technique was used to join the pipe and fittings. During this process, the pipe and fitting are placed on a 400-500°F heating iron, then connected. This bonds the pipe and fitting at the molecular level without the use of chemicals or mechanical connections, and it eliminates systematic weaknesses and fail-points. The heat-fused fittings maintain the same properties as the pipe itself, so physical stresses do not compromise their integrity.

“So when John E. Green wanted to bring it in on this other project, I was all for it,” Williams said. “On this project, we again appreciated the inherent insulating properties of the Aquatherm pipe, and we can bill this as a green product. So even though we’re not building a totally green building because that costs a lot of green, we’re able to boast a bit about what we are doing here.”
—Bob Williams, Director of Plant Operations at U of D Jesuit

Once the installation was complete, the Aquatherm-required pressure test was performed using compressed air. There were no leaks. 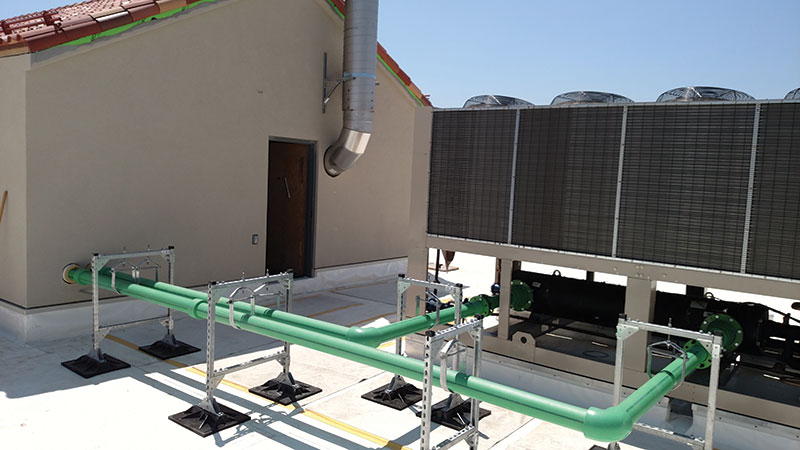 Although this was Umphrey’s first experience using Aquatherm pipe systems, he was impressed.

“There’s an element of preparation that goes into every joint, but you become a student of the process, and the more you do, the better you become,” Umphrey said. “Toward the end, I really had a good handle on what to do and how to make a perfect fusion, and there’s definitely a labor savings compared to welding steel pipe.”

He added that there is a tendency to be skeptical when a product has so many benefits, it almost seems “too good to be true.”

“Most of us tradesmen in the field are ‘I’ll believe it when I see it’ types,” he said. “But I will say that after going through the process and the pressure test, I’m more than comfortable installing and recommending Aquatherm pipe.”

Bobrowski had a number of reasons for recommending and specifying Aquatherm for the project’s chilled-water piping system. It is corrosion-resistant, will not scale, and does not require the system water to be chemically treated. When using Aquatherm’s heat-fusion technique, no welding permits are needed because the process poses no fire hazards; additionally, no solder, glues, gaskets, or other fillers are present that could wear or corrode the pipe, causing issues later.

Another reason Bobrowski selected Aquatherm was to help John E. Green become more familiar with the piping system and its uses, acquire training for the company’s tradesmen, and validate the product’s labor savings. Because Aquatherm pipe is so light, installers can move faster, saving on labor costs without the risk of injury that often comes with metal pipe; additionally, the pipe’s light weight eliminated the need for extra heavy-duty hangers. Finally, joining the PP-R pipe via heat fusion sped up the welding process, saving even more on labor costs.

“I think it was a good deal for U of D Jesuit and a good experience for John E. Green to get on board,” Bobrowski said. “Since I did the design and we’re the engineer of record, it was an opportunity for John E. Green and our people to get involved with a great new product, and you have to capitalize on those opportunities when they arise.”

And most importantly, the customer is pleased.

“When Mark [Bobrowski] first introduced the Aquatherm pipe to us for the residence building, I liked the insulation properties of it and the speed of putting it together,” Williams said. “On that job, the team had budgeted for the trench to be uncovered—and an excavator operator required onsite at his hourly rate—for eight or nine days. The Aquatherm installation only took six days. If we had put steel or welded pipe in, it would have taken a lot longer and increased the costs dramatically.”

The German-manufactured pipe has been one of the world’s most durable and greenest piping systems for four decades and proven successful in 70-plus countries. Aquatherm piping systems offer many performance and environmental benefits, such as: