Thanks to Aquatherm’s Scan-to-Fab, Fabrication Service, and fast installation, a project that would have taken four months with steel pipe was completed in five weeks

Combine a forward-thinking university, an aging central utility plant, a tight project deadline, and what do you get? An opportunity for Aquatherm to showcase its capabilities and the advantages it offers over other piping systems. 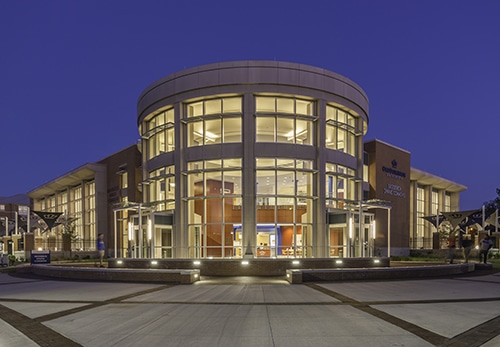 The Broderick dining commons at Old Dominion University is one of the campus buildings served by the university’s new central utility plant.

You also get an outstanding new central utility plant for a district cooling system at one of the nation’s leading research universities, installed and completely piped in only five weeks during the university’s winter break in December 2019 and January 2020.

THE DOMINION OF KINGS AND QUEENS

Old Dominion University (ODU) in Norfolk, VA prides itself on—among other things—its engineering program and cutting-edge research capabilities. Founded in 1930 by the College of William & Mary and Virginia Polytechnic Institute, the two-year school originally focused on educating teachers and engineers. It rapidly evolved into a four-year university with six colleges, and today is one of the largest universities in Virginia with an enrollment of 24,176 students for the 2019 academic year. Old Dominion has achieved designation as a Research University (high research activity) from the Carnegie Foundation for the Advancement of Teaching.

For those who do not hail from Virginia, the name “Old Dominion” is a well-known nickname for the state given to the state by King Charles II of England for remaining loyal to the Crown during the English Civil War.

As the time approached for ODU to update its chiller-based central utility plant, the university began to map out a plan with general contractor WM Jordan and one of WM Jordan’s long-time construction management partners, JRC Mechanical in Chesapeake, VA. The project would include tearing out the plant’s existing pump skid that had three chilled water pumps and three condenser loop pumps, and adding a new 1,200 ton chiller and a fourth cooling tower to increase the plant’s capacity. 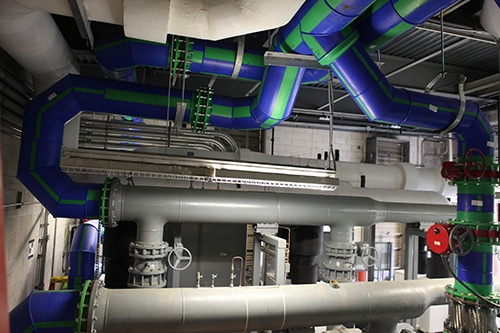 As WM Jordan, JRC Mechanical, and ODU analyzed the project, they originally thought it would take about four months—a timeline that would have caused considerable disruption for the university. The project team, however, came up with a better plan: using Aquatherm pipe to take the project from start to finish in just five weeks. The university had experience with Aquatherm pipe, as it had been used in a recent replacement of the domestic water system, condenser loop, and heating water loop at its football stadium.

Because several of the university’s residential buildings would be affected, there was no margin for error on the project’s completion date. However, JRC Mechanical and the university knew they could make it work through careful planning and by taking full advantage of Aquatherm’s Scan-to-Fab and Fabrication Services.

FROM FOUR MONTHS TO FIVE WEEKS

Aquatherm’s heat fusion process can result in significant time- and labor-savings on piping projects. Heat fusion can be performed in a fraction of the time it takes to weld steel, and results in a homogenous connection with virtually no possibility of leak paths. Aquatherm’s Scan-to-Fab service provides a trained technician performing an onsite job scan using a 360-degree laser scanner. The resulting point cloud can be used to create a fabrication model and fabrication spool drawings. It helps ensure the accuracy of measurements (down to 1/8-in.), dramatically reduces measurement man-hours, facilitates quicker installation on complex projects, and provides as-built dimensions.

“This had originally been designed as a four-month process, but working with Aquatherm enabled us to get it done during the winter break at the university, from mid-December to mid-January,” said Richard Goad, Project Executive, JRC Mechanical.

“Aquatherm came into the existing building and scanned it completely, and that’s how we were able to coordinate the plant install,” Goad explained. “We took the cloud points from the scan and sent the model drawings to Aquatherm’s fabrication group in Lindon, Utah. They took that and, along with the chiller and cooling tower dimensions from our vendors, used the information to custom fabricate the pipe for this facility.”

Goad noted that Aquatherm allowed JRC Mechanical to save 10 to 15 fabrication personnel on this project. The company also didn’t have to invest in building a fab shop and stocking it with tools.

For the first two weeks of the project the JRC Mechanical team worked 24-hours a day, and then continued to work through the holidays, taking only Christmas Day off.

Overall, the central utility plant project included installation of a pump skid built by Canariis consisting of three 250-horsepower chilled water pumps and three 50-horsepower condenser water pumps. Aquatherm supplied more than 700 ft of Blue Pipe SDR 17.6, with a 20-in. header on the chilled water side and an 18-in. header off the condenser that feeds back to the cooling towers. Also included were the new chiller and cooling tower.

In addition to Aquatherm, other products key to the success of the project included York chillers, an EVAPCO cooling tower, Siemens variable frequency drives, and Bell & Gossett pumps. 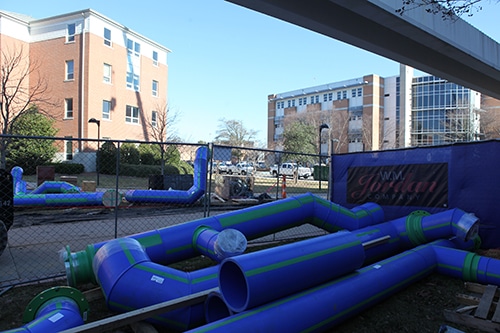 David Robichaud, Director of Design and Capital Construction at Old Dominion University, noted that the central utility plant project was an important one for the university.

“We have six housing buildings and a dining facility on this plant, and we’re about to put an athletic building, new chemistry building, and new 470-bed residence hall on it as well,” he said. “So not only was it an important project for the university, it was also important that we get all those buildings up and running in such a short period of time.”

Robichaud added that the university prides itself on building the right team for every project it undertakes.

“Everyone involved set us up for success,” he said. “We mapped this project out very carefully and we have been very confident all along that it would succeed.”

“The coordination between JRC Mechanical, Aquatherm, WM Jordan and ODU went really well,” Goad added. “The staff at ODU was ecstatic about the system being up and running when they needed it to be.”

Goad was pleased to report that the system passed the pressure test with flying colors.

“There were no leaks whatsoever in any of the assemblies that Aquatherm fabricated, and our guys didn’t have to take down and re-do any of their fusion connections,” he said. “We installed it, tested it, and everything was good.” 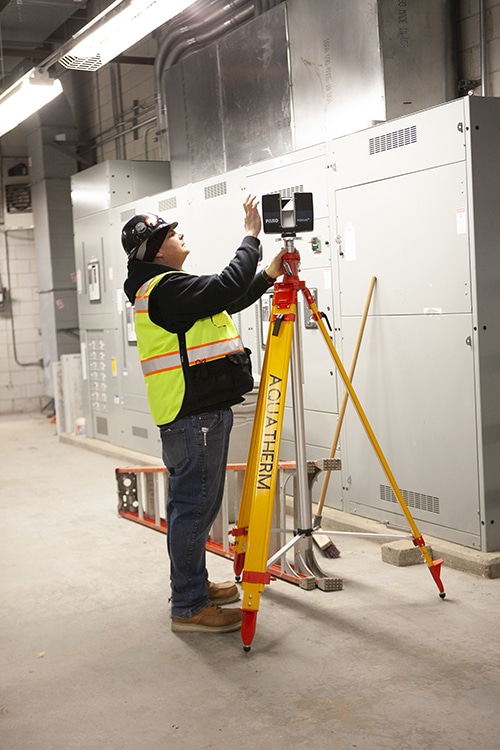 An Aquatherm technician sets up the 3D laser scanning camera that was used to provide the project’s point cloud rendering.

Robichaud noted that the university is “still taking the system for a test drive,” but the plant and all the buildings that rely on it are functioning as intended.

“It gave us the upgrade we needed. Using Aquatherm shortened the time of the project to one we could live with,” he said.

ODU’s Director of Operations and Maintenance, John Hasher, CEM, added that Aquatherm represents an easy system for facility managers and building operations personnel to live with day to day.

“On the maintenance side Aquatherm pipe significantly reduces or eliminates the problems that corrosion and scaling can cause over the life of the building,” Hasher said. “In addition, Aquatherm’s heat-fused connections are more reliable than the connection methods used to join traditional pipe. With iron or steel pipe most leaks don’t come from the pipe itself, they come from the ‘human element’ of fabricating the system: the joints and welds. But with Aquatherm the finished product is sealed tight and is significantly more durable than traditional piping systems.”

Hasher also noted that he is happy to share his experiences with other end-users.

“When we come across things that work and are proven in the field, we should take that opportunity to let other people know about the product and its benefits,” he said. “We were all smarter together than we are individually.”

Robichaud added that it’s likely the university will spec Aquatherm as the campus continues to grow. But, for now, there was one more plus to being able to complete this project during the winter break: “The good news is we didn’t have to greet the returning students with bad news,” he said.