The labor-saving aspects of Aquatherm Blue Pipe® allowed the contractor to finish the job ahead of schedule.

The chillers at this college run whenever the temperature is above 60°F, so the contractor had a four-month window in winter to perform the retrofit.

The labor-saving aspects of Aquatherm Blue Pipe® allowed the contractor to finish the job ahead of schedule. 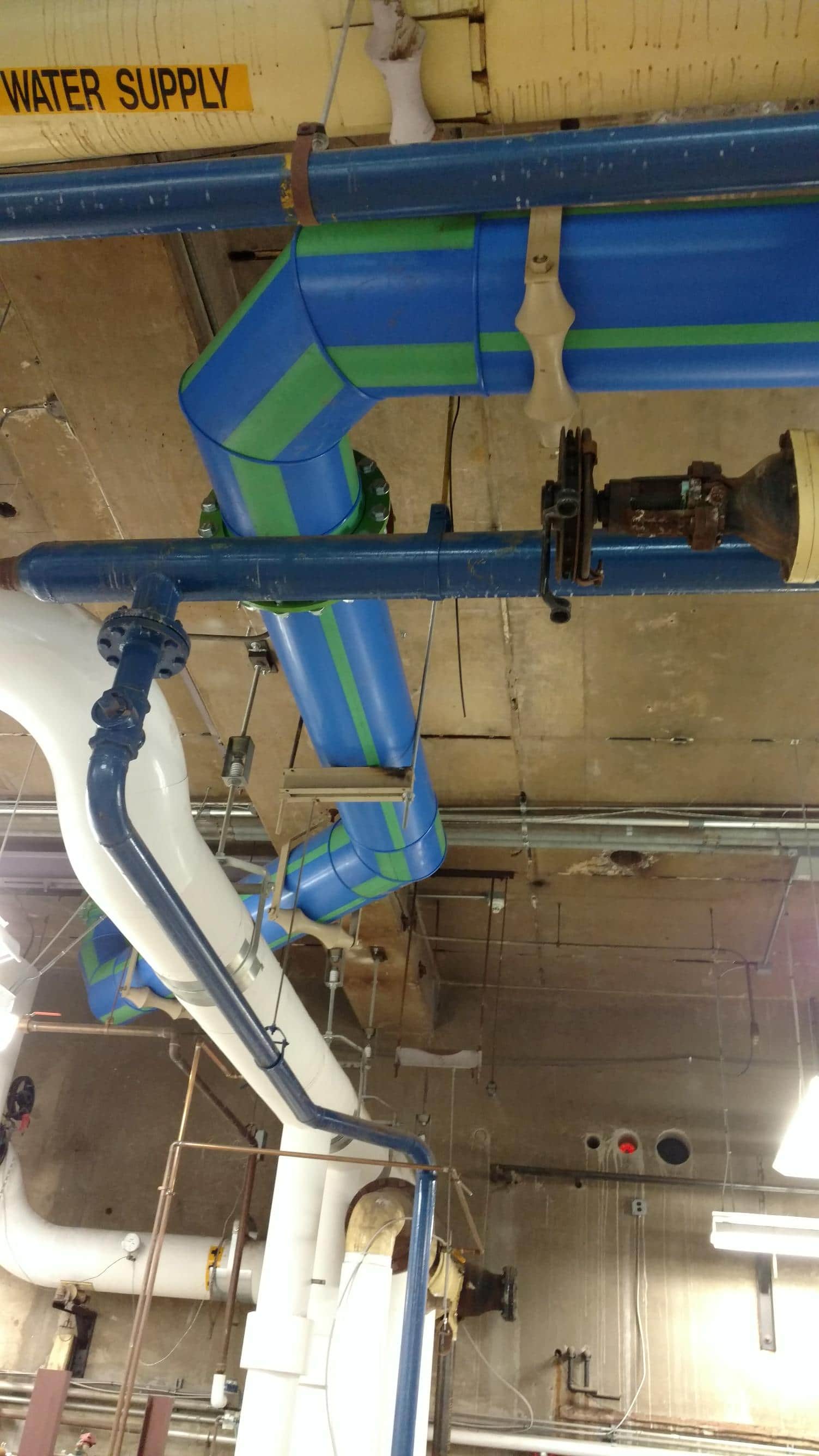 The aging chiller/boiler physical plant at a New Jersey community college had received some upgrades in recent years, but it was still missing a few crucial pieces to help it operate up to its full potential.

In 2012, the college had made improvements that included new Harsco 4.3 million Btuh gas condensing hot water boilers and Trane CenTraVac R-123 low-pressure chillers. However, equipment wasn’t coming on when it should have, or was operating continuously, or wasn’t modulating properly. In 2015 the college’s facility manager improved the plant’s efficiency via a Carrier i-Vu BACnet-enabled building automation system, and proper control is saving the college energy and money.

But one last big project remained — replacement of condenser water piping between the chillers and the cooling towers. The system’s existing piping was black steel that was severely corroded and scaled.

The material handling challenges, plus the length of time it takes to weld black steel, bumped up against the college’s time constraints: the issue being that the chillers kick on whenever the outdoor temperature goes above 60°F. That meant the college had a four-month window in the winter of 2017-2018 to get the piping changed out. The project included installation of two new Baltimore Aircoil four-cell cooling towers.

In addition, chunks falling off the corroded black steel pipe were clogging the strainers and potentially damaging the pumps and chillers. When the college asked for a solution, the project’s consulting engineer knew that Aquatherm Blue Pipe® had been used successfully in the United States for several years. The consulting engineer designed the retrofit with both black steel and with Aquatherm Blue Pipe. The design with Aquatherm pipe turned out to be less expensive because of the projected labor savings, plus the college preferred it, so it was an easy decision.

THE HIDDEN COSTS OF STEEL

“The cost of using steel is not just the installation,” Garavito said. “It’s the hidden costs that have to be recognized by the facility manager and the owner about a metallic piping system.”

Even treated pipe will rust and scale over time in condenser piping applications, Garavito pointed out, especially if the pipe is exposed to chemicals. That makes Aquatherm polypropylene-random (PP-R) pipe, which is hydrophobic and will not scale or corrode, an ideal solution for projects like the one at this college. Garavito noted that a similar condenser water re-piping project was recently completed at Rutgers University, where Aquatherm pipe also was the solution. That project used Aquatherm pipe in sizes 6-in. through 12-in.

Use of Aquatherm PP-R pipe also solves several other problems for a mechanical contractor, Garavito said. The contractor doesn’t have to store acetylene. No fire watch is required. It offers significant material handling advantages over steel pipe. And it eliminates the risk of eye injuries that can be caused by grinding steel pipe.

Since there’s no welding, there are no welding fumes, Estock noted. He explained that he performs a lot of work at schools, and school administrators don’t want students exposed to welding fumes. That forces the contractor to work at odd hours.

Estock, who has been piping boiler rooms since 1988, won the project against 10 other bidders. The Aquatherm pipe cost more than black steel, he said, but the labor savings more than made up for it.

However, after he won the job, Estock became worried; he had zero experience with Aquatherm pipe and admits he didn’t know what he had “gotten himself into.” He was even more nervous when he was told he would be performing the largest Aquatherm job in New Jersey.

“Put yourself in my shoes,” he said. “I’m a contractor who had never used this product before, plus the job itself had difficulties like 18-inch pipe going over top of new boilers. That made me very nervous at the beginning, honestly.”

He didn’t have to worry for long, though. The local Aquatherm distributor provided extensive training and his highly skilled fitters quickly got the hang of fusing Aquatherm.

Estock’s crew needed some scissor lifts and a couple of forklifts to move the Aquatherm Blue Pipe around the jobsite, but it was light enough that they could easily make fusion joints with the pipe in the air. The Aquatherm 18-in. Blue Pipe SDR 17.6 used on this job weighs 22.9 lbs. per foot and comes in 5.8-meter lengths, or about 19 ft.

The main advantage of the Aquatherm Blue Pipe was the weight, Estock said. His crew could carry 10-in. and 12-in. pipe sections without using material handling equipment. A standard 21-ft length of 18-in. steel pipe weighs 2,200 lbs.; installing 18-in. pipe over the boilers as Estock had to do would have been extremely difficult with black steel.

The second big advantage was the speed of making heat-fused joints in PP-R pipe. Estock said he could heat fuse 18-in. Aquatherm pipe in one hour, compared with more than a day to weld an 18-in. joint in black steel.
“With the time constraints, God knows what would have happened if this were black pipe,” the college’s facility manager said. “We might still be welding down there.”

“[Aquatherm] is a phenomenal way to go,” the facility manager concluded. “The dollars are neck and neck, but with the durability and no scaling and the ‘green’ element it brings, it’s leaps and bounds ahead of black steel now. Of course, we’ll find out in five to 10 years from now how it goes, but if you maintain it, it should be years and years and years of success. I see no issues with it. We’re glad that the school invested in this. It’s a great installation for all the parties involved. Everybody’s a winner in this.”