FOR THE LOVE OF BEER - Aquatherm

FOR THE LOVE OF BEER

A startup brewery needed to save as much money as possible, and find a piping system that wouldn’t crack under extremely cold temperatures. 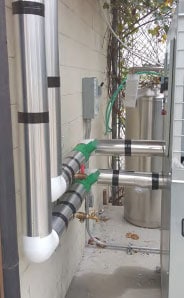 Nashville: Music City USA. Besides being the birthplace of country music, Nashville, TN, is known for great restaurants, an art scene and a vibrant night life. It’s no surprise Adler Lentz and Kurt Smith, business partners and owners of Smith & Lentz Brewing Company, decided to open their brewery in the vibrant and dynamic city. The brewery includes a taproom featuring 22 beers that is open to the public. Additionally, Smith & Lentz has five distribution accounts in the Nashville area.

Smith’s love of craft beer developed early: While Smith was attending the University of Minnesota, Minneapolis, from 2005-2009, he noticed that the area’s brewers were not only creating interesting and unique beers, they also were building and sustaining a sense of community around its brewery culture. He also had the opportunity to travel abroad during college, and thanks to a semester in Prague, he further developed his love for and interest in craft beers, which translated into a serious hobby. After college he moved to Austin, TX, and while living there he brewed beer at home, learning the ins and outs of various brewing methods. Also in Austin, he worked as an environmental and risk consultant and found time to volunteer at local breweries.

Meanwhile, Lentz was working as an apprentice at a small brewpub in Milwaukee, WI, learning the basics of commercial brewing. After his apprenticeship, he moved to San Diego, CA, and became a brewing-equipment installer. For four years, Lentz built systems for a variety of breweries—from startup breweries to larger commercial ventures. One of the brewery systems Lentz installed happened to be in Austin.

“When I installed the Hops & Grain Craft Brewery system, I was offered a job as the head brewer, so I moved to Austin for the opportunity,” Lentz said. “Kurt Smith was friends with the owner of Hops & Grain, and that is where we met. The strange thing is we both realized we grew up in Wisconsin only 15 miles from each other.”

The two craft-beer aficionados started talking about building a brewery, taking only four months to create a solid business plan.

While working on the business plan, they considered where they wanted to locate the brewery, and Nashville was the city of choice. According to Lentz, Nashville has the perfect demographics for a brewery, and quality of life there is excellent.

“We were both looking for a change from Austin, and we were looking into a variety of different cities on the West Coast, such as Portland, Seattle, and San Diego,” Lentz said. “My girlfriend is from Tennessee, so she suggested Nashville. We started looking at the demographics of the area, and they are identical to Austin and Portland, but a lot less breweries are located there, so we saw a great opportunity. We figured this was a great time to move there and open a brewery.”

Once their business plan was completed, they moved from Austin to Nashville to start work on the brewery. They hit a temporary snag when a fire broke out in the brewery building, but it didn’t sidetrack them for too long: The entire project—from creating a business plan to opening the brewery to the public—took three years. Designing a glycol-cooling piping system for the brewing process, including research, product certification, and installation, took only two months; the brewery then opened in the fall of 2015. 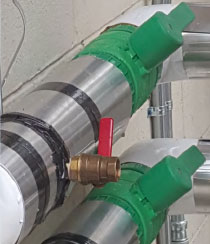 Smith and Lentz researched a variety of materials, including copper, Schedule 80 PVC, and ABS, to use for the glycol-cooling piping system. According to Lentz, he and his partner were considering copper, but its expense wasn’t feasible for their project.

“Copper is more expensive, harder to work with, and it doesn’t have a good R-value,” Lentz said. Since PVC becomes really brittle when it gets cold, that was not a viable option for us either. We then researched Aquatherm polypropylene-random [PP-R] piping systems, and this product offered everything we were looking for, plus more. We picked Aquatherm because of the price, R-1 insulating value per inch of material, and the ease of installation.”

Lentz also was interested in Aquatherm because he had seen it two years earlier while in Florence, AL, at the Singin’ River Brewery. The brewery had used Aquatherm for its glycol-cooling system as well. 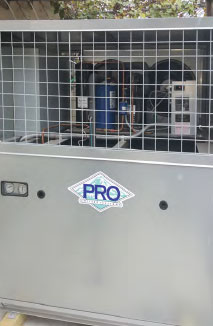 “The brewery is a startup, so we are really lean. As a startup, you need to save money when you can, and labor is an area where we could save money,” Lentz said. “The quote for copper was about $20,000, and for a startup that is a big chunk of change, so when we got that quote we looked at other options. And that’s when it started to make sense that we should use Aquatherm and do the install ourselves. We saved about $12,000 by doing this.”

Before Smith and Lentz could start installing the Aquatherm piping in the brewery system, they needed to complete and pass a training course on heat fusion at their local Aquatherm distributor.

Heat fusion is a process used to join thermoplastics such as PP-R together. Similar to welding, heat fusion physically turns the two pieces of plastic into one piece. In the case of Aquatherm’s specially formulated Fusiolen PP-R, heat fusion does not weaken the material at the point of connection. The heat-fusion connections have the same strength as the pipe wall, so the connections are as strong as the pipe itself.

Heat fusion returns the connection point to a melted state, the same state it was during production. This creates a permanent bond: The polypropylene chains join together as the connection cools, preventing any sort of chemical or physical weakness at the joint. This results in a much lower instance of leaks or failures.

“When we arrived at [the distributor], they had machines set up for us, and we got to learn about the product and put fittings together and see the product fused,” Lentz said. “After our day of training, the Aquatherm representative gave us a test to take to make sure we knew the ins and outs of the process.”

Once the training was completed, Smith and Lentz were able to begin the installation.

NONTOXIC, HYDROPHOBIC PIPING SYSTEMS CAN STAND UP TO HARSH EXTREMES

Aquatherm’s benefits include labor savings; a 10-year, multimillion-dollar warranty; and environmental friendliness: No toxins or VOCs are associated with installing the PP-R piping systems. Aquatherm requires much less energy to produce than metal piping systems, and they are completely recyclable when no longer needed. Additionally, Aquatherm is less likely than other types of systems to be stolen from a jobsite.

Further, Aquatherm piping systems are made from PP-R, one of the longest lasting and most chemically inert piping materials available. Hydrophobic, Aquatherm PP-R does not react with water. It won’t corrode, scale, or pit like metal pipes, and it can withstand extreme temperatures up to 180°F at 100 psi.

To construct the glycol-cooling piping system, Smith and Lentz chose 2-in. Aquatherm Blue Pipe® for all of the headers—the actual loop that runs to and from a PRO Refrigeration glycol chiller with a 100-gal. reservoir, which is common in breweries—amounting to 350 ft of Aquatherm pipe.

Electronic temperature sensors on the brewery’s eight vessels control a solenoid valve on the glycol supply piping system. When the sensors notify the associated computer system that a tank needs cooling, the solenoid valve opens, allowing the cold glycol to flow through the warmed tank and chilling the brewery products inside. Once the vessel reaches the correct temperature, the solenoid valve closes, and the glycol is cut off from the vessel. Each of the vessels is in a various stage of fermentation or conditioning; because there are many different stages, the demand for cooling is constant, so the chiller continually works to maintain the 29°F glycol setpoint. 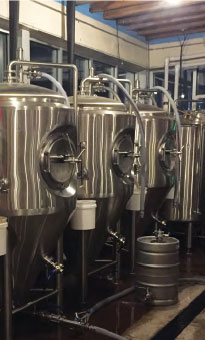 “Glycol-chilling systems for craft breweries continue to be a good application,” Trautman said. “[Lentz] told another brewery owner about Aquatherm, and we now have another installation underway.” Yet, Aquatherm has so many uses in a brewing operation: It is approved for potable water and food contact and is great for compressed air, heating and cooling and so many other applications.

“The insulation value of the Aquatherm pipe is great, and we don’t have drips anywhere [resulting from condensation]—when I walk into the brewery every morning, it is bone dry,” Lentz said.