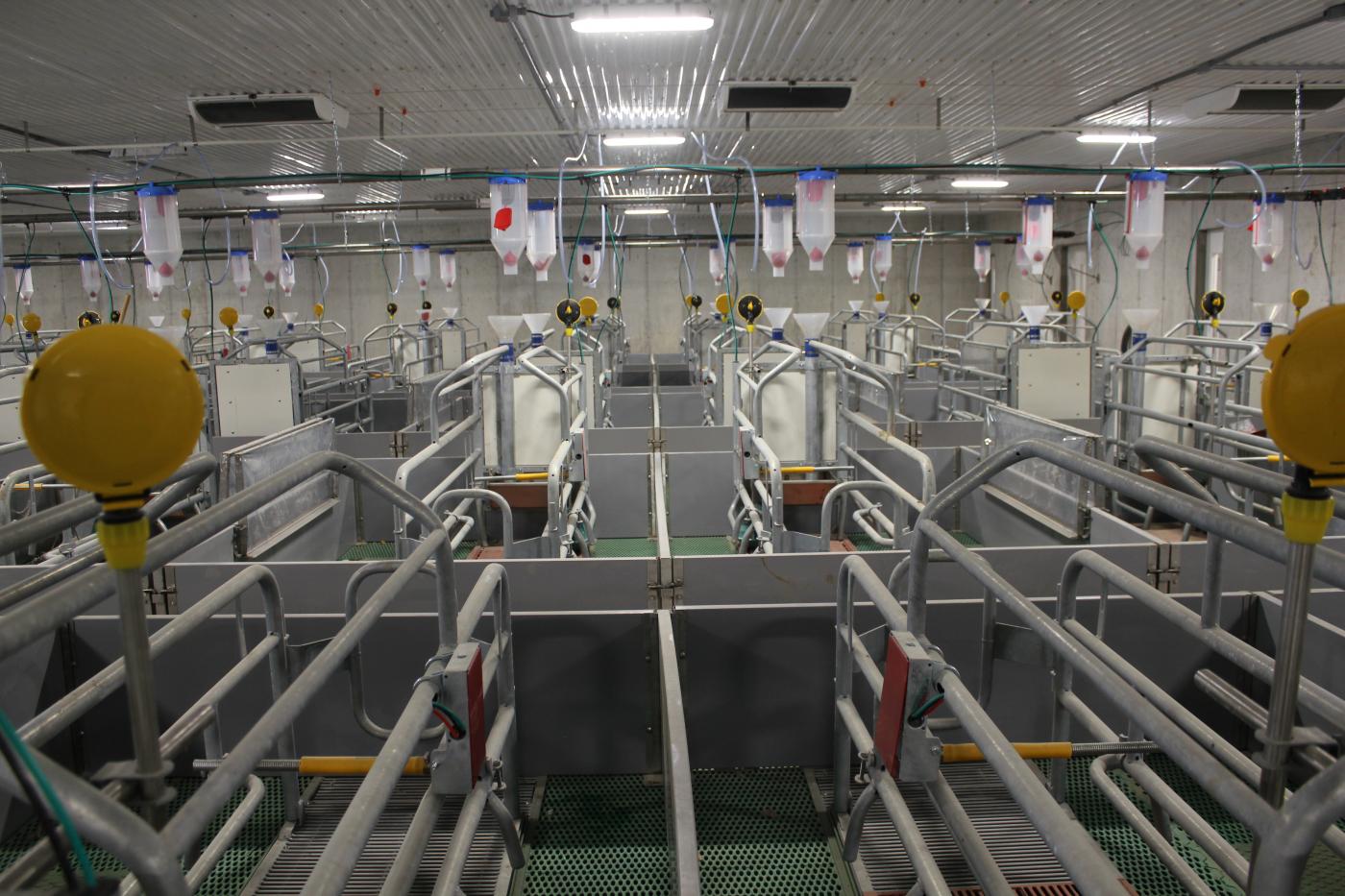 When a pig barn is occupied and operating the indoor air quality can be very harsh, but Aquatherm pipe is unaffected by the corrosive environment.

A happy sow is a better sow. If you didn’t know that, don’t worry: the people who need to know it do. They also know that Aquatherm polypropylene-random (PP-R) pipe can help make sows and humans alike very happy.

Those who are unfamiliar with hog farming may never stop to think where that bacon is coming from. But it is a major business in some areas, and the indoor environment in a hog barn can be harsh. The ammonia and other chemicals (both man-made and hog-made) in the air can quickly attack and corrode metal pipe. That makes Aquatherm PP-R pipe an ideal choice for these applications.

At the Boekhorst Farm in Arkona, Ontario, Mid-Lam Heating & Cooling ran more than 1,500 ft of Aquatherm Blue Pipe® for a heating and cooling system moving 1.2 million Btus in a 64,000 sq ft pig barn. In addition to the space heating and cooling, the system also feeds individual heating pads for the sows. After all, we did mention that a happy sow is a better sow. 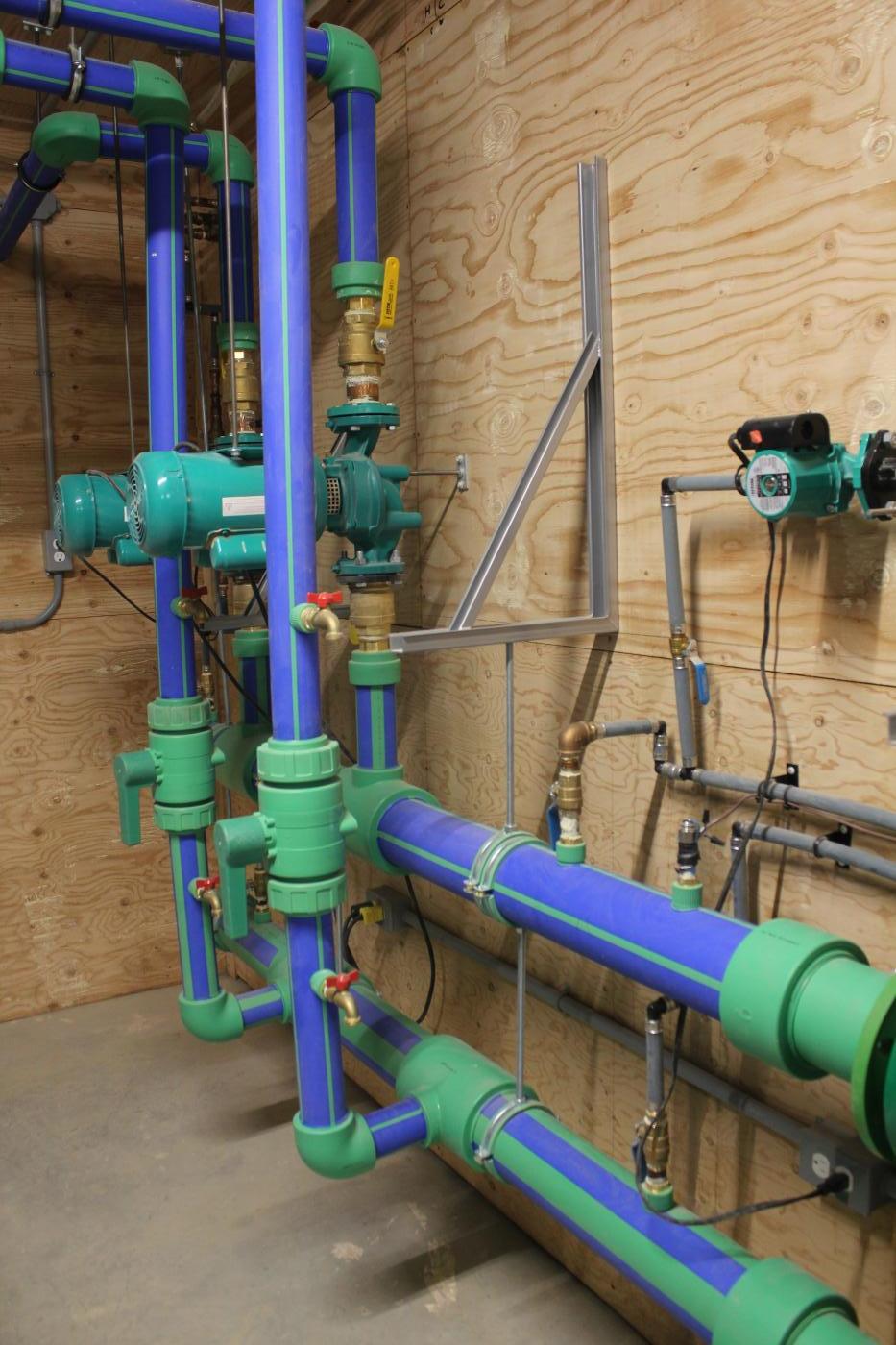 The contractor on this project was impressed that Aquatherm pipe doesn’t radiate heat the way black pipe does.

Mid-Lam Heating & Cooling is a 30-year-old residential and agricultural contracting firm named for its location on the border of Middlesex and Lambton counties in southeastern Ontario.

Owner Kent McLellan and his team had experience with Aquatherm PP-R pipe on previous projects, and he knew immediately that it would be the right choice for this pig farm. In fact, he said he never would have considered another option.

“Black iron pipe not a long-term solution in barns,” McLellan said. “There’s too much risk of corrosion.”

The system design for this project was performed by Brendon Yadu, Technical Sales at Hydronic Solutions Inc., Waterloo, Ontario. The design called for 120 13-ft lengths of Aquatherm Blue Pipe SDR 11, 2½-in. at the headers and 4-in. in the mechanical room and the barn itself.

The Aquatherm piping installation took place over three months in the autumn of 2017. The process went smoothly, with Ritmo fusion tools and support from Hydronic Solutions.

The system was not complicated, but it was extensive. A large hot water (180°F) circulation loop runs the length of the barn. This loop is split by system pumps to go into the barn’s two wings, and from there additional pumps and mixing valves allow the water temperature to be modulated for various purposes.

“For example, the sows in what are called the farrowing rooms have hydronic heating pads that slowly raise and lower them when they stand up and lie back down. That helps ensure that little piggys don’t get trapped underneath the heavy sow,” Yadu explained.

He added that Mid-Lam’s success with Aquatherm on similar projects contributed to the company’s confidence using it at this pig barn.

“Recently Kent had done a project similar to this but much smaller,” Yadu continued. “It was two boilers instead of five, but it was based on the same idea of providing pad heaters for the pigs and unit heaters in the barn. It had a very similar setup, and the customer was really thrilled. So we all had a lot of confidence going into this project.”

Compared to some of the other residential and agricultural projects Mid-Lam has successfully completed in its long history, the size of this project might have been considered daunting. However, McLellan said the ability to break the project down by zones enabled his team to handle it without being overwhelmed.

“When you look at the big picture of 1.2 million Btus and a large amount of HVAC equipment it can be easy to become bogged down,” he said. “In cases like this I’ve found it’s best to approach the job in segments. In this barn we were lucky that we had different zones and that’s what we focused on. We knew what the end game was, but we just stayed focused on the tasks at hand and checked off the zones as we completed them.”

The fabrication capabilities of the Mid-Lam team and the versatility of Aquatherm pipe helped keep this project moving, as assemblies could be prepped in advance or custom fit on the spot. McLellan noted that his people like working with Aquatherm PP-R pipe more than steel or black iron, because of its lighter weight and ease of joining pipes via heat fusion compared to welding. He advised companies just discovering the advantages of heat-fused PP-R pipe to train anyone who has the interest and potential.

“There’s no downside to having people trained on heat fusion, and the more people who know it the better,” McLellan said. “It makes them care and it makes the project go well.”

PUTTING THE BTUS WHERE YOU WANT THEM

According to McLellan, several factors were important when it came to the choice of Aquatherm pipe for this pig barn. The biggest factors were resistance to environmental chemicals and the installed pipe’s ease of maintenance, but also key was that Aquatherm pipe gives off so little heat.

“That’s important when you have a 1.2 million Btu mechanical room,” McLellan said. “Even when it’s not insulated, Aquatherm doesn’t radiate heat the way black pipe does. The Btus are actually going where you want them to.”

Also important were environmental friendliness, and the fact that no open flames, solder, or ‘pipe dope’ are needed. “You can’t beat it,” McLellan said.

TOUGH PIPE FOR A TOUGH ENVIRONMENT

Yadu agreed that Aquatherm’s resistance to harsh environments is a big advantage when it comes to agricultural applications.

“Air quality is a huge issue in pig bans,” he said. “You’ve probably never been to a pig barn, and if you don’t have to go into one, don’t. They are probably the most difficult type of barn in my opinion. If you spend a few hours in there your lungs begin to feel as if they’re burning. It’s probably the ammonia from the manure that creates such a corrosive environment for metal pipe. But we all like bacon, don’t we?”

In addition to holding up well in the corrosive indoor environment of a pig barn, Aquatherm pipe is cleaner and easier to maintain than steel pipe, Yadu said.

“I’ve found that most contractors in North America don’t really set up to clean new systems and then maintain them,” he said. “When that’s the case and you start out with a length of steel pipe that has all that oil and potential loose steel filings inside, you can end up with pretty big problems down the road. Aquatherm, on the other hand, is very clean by comparison.”

Yadu noted that some pictures of this project posted on LinkedIn generated a tremendous number of views.

“I found it interesting how many people took a liking to this project,” he said. “To me, designing like this with Aquatherm has just become kind of standard. So we really found it extraordinary that we had people from all over the world commenting.”