Offsite fabrication services and the light weight of Aquatherm pipe allowed 436 spools to be fabricated and hung 25 to 30 ft above the floor.

This large plant with high ceilings needed an easy-to-install, durable piping system to carry a secondary refrigerant (glycol) throughout the processing and shipping and receiving areas.

Offsite fabrication services and the light weight of Aquatherm pipe allowed 436 spools to be fabricated and hung 25 to 30 ft above the floor.

Versatility and ease of use of are among the “meat and potatoes” qualities of polypropylene-random (PP-R) pipe, and both played a prominent role in the successful completion of a refrigeration project at an Ohio beef and pork processing plant.

The project began in September 2017 and the piping portion was completed on schedule in January 2018. On this project, Aquatherm Blue Pipe® SDR 17.6 MF, ¾-in. through 14-in., was used to carry a secondary refrigerant (glycol) throughout the 500,000 sq ft facility. The glycol, which is used in the processing areas and shipping and receiving, is piped through the PP-R pipe at a frosty 22°F.

THE POWER OF FABRICATION

Jason Waters, Senior Project Manager, Stellar Refrigeration, is a strong believer in the power of fabrication to save time and labor on the jobsite. On this project, Stellar and AC General took full advantage of PP-R pipe’s ability to be fabricated offsite and the pipe’s light weight, hanging 436 fabricated spools 25 to 30 ft above the floor. The fabrication was done by Aquatherm Design and Fabrication Services at the company’s Lindon, UT, headquarters. 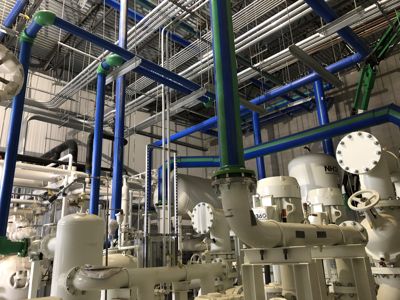 “When I was in design and engineering here at Stellar, I was among the first people who started using 3D modeling,” Waters said. “That was about 15 years ago, and I’ve always been a big fan of prefab. We do a lot of skid fabrication, and being able to fab something up from a shop drawing and then just turn around and put together the puzzle piece is a big time-saver. It also takes a lot of potential errors out of the equation.”

“They can prefabricate a section of pipe, put it on a truck and when it gets to the jobsite it’s ready to hang,” he said. “It’s much easier than delivering a bunch of pipe and fittings.”

Drummond noted that Aquatherm pipe offers a number of advantages over traditional carbon steel pipe, including a longer service life, lighter weight, potential labor savings, and properties that prevent it from corroding.

From his company’s point of view, Drummond says his field installation team likes working with PP-R pipe because it’s lighter, cleaner, and easier to work with than steel. These advantages also were cited by Waters. He noted that Stellar had worked with Aquatherm pipe on a previous project in Linden, NJ, and the company has two more projects using Aquatherm in progress — one in New Jersey and one in Arizona.
“I’ve been there on projects where Aquatherm was being installed and it looks like it goes in very smoothly,” Waters said. “It goes up very quickly, and it’s easy to move around — it doesn’t take 10 guys to lift and carry a piece around like it does with carbon steel pipe.”

Waters added that the light weight of PP-R pipe makes it easier when it comes to supporting it and insulating it.

“We don’t have to block up the Aquatherm pipe like we do carbon steel pipe when it’s time to insulate it,” he said. “One person in a scissors lift can just lift the pipe up and slide the insulation on without any special rigging.”

Even more impressive to Waters is the performance of PP-R’s heat-fused connections.

“When we pressure tested the Aquatherm pipe on this project we didn’t have any leaks,” he said. “Typically, with carbon steel pipe — no matter how good your guys are — you’re going to have a couple leaks here and there. But to my knowledge we didn’t find any leaks when it came to the joints of the PP-R.”

THE ADVANTAGES OF HEAT FUSION

At this processing plant, AC General’s team used a combination of Widos and McElroy fusion tools, including the Widos 4400, 4600, and 4900 for butt fusions and McElroy Spider™ 125 and Socket Fusion Kits. Wallraven hangers, supports, and hardware were used to secure the finished piping overhead.

Drummond pointed out that heat fusion with PP-R pipe represents a huge labor savings over welding steel. The differences were very evident on this project in which, in addition to the glycol piping, AC General had to weld a sizable amount of steel pipe for an anhydrous ammonia system.

“First of all, really good welders are few and far between, and they aren’t cheap,” Drummond said. “And for every welder, we had to pay someone to stand there on fire watch.”

Drummond noted that while AC General was stick welding at this facility, his team had to set up numerous fans, ventilation units, and fireblankets.

“There were thousands of dollars of ancillary items that we had to buy continuously when we were welding steel,” he said. “And then we would still get shut down because there were too many fumes.”

None of those measures were necessary when heat fusing PP-R pipe.

Drummond estimated that on this job, AC General saved approximately 50 percent on labor for the Aquatherm part of the job, compared to the time it would have taken with steel pipe.

“If we had to do this in steel, it probably would have taken twice as long, and it would have taken significantly more manpower to do it,” he said. “As it was, the amount of steel pipe that we had to weld was probably one-third of the amount of PP-R pipe. And that amount of steel took us longer to do than the PP-R. In addition, we basically had four men do all the PP-R, and we had 25 do all the welding, including fitters, helpers, and fire watch.”

Waters noted that he is generally not the person from Stellar who gets in front of a building owner customer to sell a project, but said he knows what he would tell customers about Aquatherm pipe if he were.

“Although Aquatherm is not the least expensive option upfront, it saves on labor, reduces safety incidents, and creates less of a mess,” he said. “When you’re welding carbon steel pipe on a roof you have to put down roof protection and no matter how much roof protection you put down you’re not going to catch everything. You’re still going to have to go back and patch the roof here and there. That doesn’t happen with PP-R. In addition, Aquatherm is cleaner to work with. There are no burrs of metal flying around, so it dramatically reduces safety incidents.”

A final advantage Waters cites from a customer’s perspective is the corrosion resistance of Aquatherm pipe. It does not suffer from the corrosion and scaling that causes pressure loss over the years the way carbon steel pipe does.

“Ultimately, as a building owner you really have to keep up with carbon steel piping to prevent it from corroding,” Waters said. “Aquatherm pipe will last for decades and it seems like it will be a lot more durable in the long run when it comes to how it will be affected — or unaffected — by whatever product you’re running through it.”