Aquatherm (Blue Pipe®) was used in 2008 and again selected (Green Pipe®) due to its stable prices and fast installations.

The engineering teams designing the renovations of the Embassy Suites hotel in Nashville were looking for a reliable pipe system that would save on materials and labor costs.

Aquatherm (Blue Pipe®) was used in 2008 and again selected (Green Pipe®) due to its stable prices and fast installations.

A large hotel replaces a lot of costly mechanical equipment over the course of its lifetime.  In the last decade alone the Embassy Suites Hotel in Nashville has replaced an aging chiller, five boilers, and a great deal of leaking pipe.

Regional Chief Engineer for Embassy Suites, Lanny Dunlap, knows that nothing last forever, but he has also learned over the course of his extensive career in the hotel industry that it pays to invest in longevity.  That’s precisely why he prefers Aquatherm polypropylene piping.  The Embassy Suites – Nashville Airport chose Aquatherm for a major chilled water renovation in 2008 and again in 2013/2014 for a hydronic heating and subsequent domestic hot water renovation.

“I’d give anything to have Aquatherm throughout the hotel,” said Dunlap, who has overseen the mechanical engineering operations for as many as 700 hotels.  His experience with Embassy Suites, as well as other hotel brands, has taught him that an investment in Aquatherm is an investment in longevity. 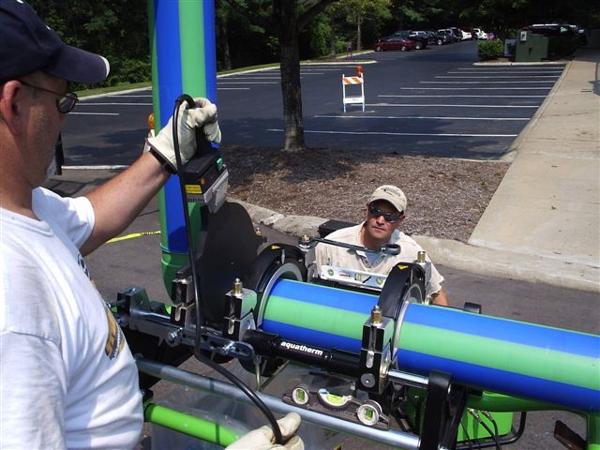 The most recent installation of Aquatherm at the Embassy Suites – Nashville Airport came as part of a mechanical room upgrade that included replacement of primary hydronic heating and domestic hot water equipment.  The existing copper piping on the domestic hot water side was 30 years old and badly damaged due to electrolysis and thinning of the pipe wall.   Two new 750,000 Btu/Hr Lochinvar® copper-fin gas-fired boilers were installed on the hydronic heating side, which offered up the opportunity to also replace approximately 60 feet of hot water supply and return piping with Aquatherm.

These renovations were followed with the addition of a new bar and common area bathroom at the hotel, both of which were piped with approximately 600 feet of Aquatherm.

With product supplied by the local Aquatherm plumbing-supplies distributor, Demand Mechanical of Nashville was able to use SDR 7.4 Aquatherm Green Pipe®, multi-layer faser (MF) pipe for all of the hydronic heating and domestic hot water/plumbing piping renovations.  The broad operating range of this piping material allows it to be applied in both heating and domestic water applications.  In this case it met the operating parameters of 150°F at 100 psi on the domestic hot water side and 180°F at 50 psi on the heating side.  Aquatherm Green Pipe is an extremely versatile piping system, but it is especially ideal for demanding potable and food-grade applications, where chemical inertness and physical durability are especially important.

The use of a single pipe material helped facilitate the 2013/2014 renovations at the hotel, both of which were each completed in  a matter of weeks by a small work crew. Heat fusion is essential to the success of polypropylene-random (PP-R) piping systems. The method joins plastic pipe and fittings by heating them to a molten state and then rapidly pressing them together to form a homogeneous bond.

For pipe sizes two-inch and under, connections are made using socket fusion, which involves cutting the pipe, marking it for insertion depth, heating the pipe and fitting for a specified time (only seconds for smaller diameters) on the heating iron, then manually pushing them together to cool. Once cool, the pipe and fitting become a single piece with no potential for leaks.

With pipe diameters of 4-in. and larger, butt fusion is used. This method uses a fusion machine to properly join the pipe and fitting using heat and pressure.

Demand Mechanical used socket fusion for the smaller pipe sizes, and butt fusion on the larger hot water supply and return piping.  Butt fusion relies on a special welding machine designed to mechanically prepare the pipe face for fusion and provide both heat and pressure while supporting the pipe.  The installers used a WIDOS 3511 welding machine for the larger hydronic pipe and a WIDOS handheld tool for the smaller plumbing pipe.

Jamie Hassett, owner of Demand Mechanical, is no stranger to the process of installing Aquatherm pipe.  Not only was he a part of both the 2008 and 2013/2014 renovations at the Embassy Suites – Nashville Airport, he has made Aquatherm his “go-to” pipe on many other projects as well.   Over the years Hassett has consistently found Aquatherm to be a more reliable and more cost effective solution than copper.  It is also less susceptible to theft.

Aquatherm doesn’t walk off job like copper does.  And the price is stable.  Copper pricing fluctuates like any precious metal so material costing can be high, plus the added risk of theft,” said Hassett. 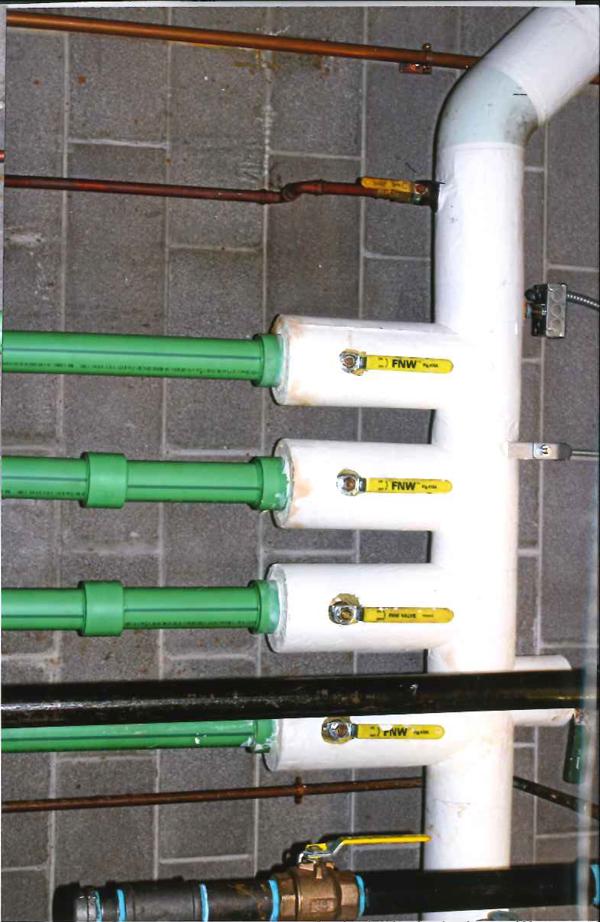 In addition to the materials savings, Hassett estimates that Aquatherm is at least 10% faster to install.  That helps keep labor costs down, especially on projects like the most recent renovation at the Embassy Suites, which was awarded to his firm based on competitive bid.

Most important is the long service life that Aquatherm provides.

“We know it is a good product as far as longevity,” said Hassett, adding that when it comes to domestic hot water piping, it is the “hands-down” winner over copper.

Lanny Dunlap concurs.  In addition to Embassy Suites, he has supervised the mechanical operations of numerous other hotel brands, including some that were exclusively committed to the use of Aquatherm

“It’s such a good product.  We didn’t have to insulate it. [The pipe can in some instances be un-insulated, but this is on a case-by-case basis]. Installation is simple. And because it can stand up to 35% expansion you don’t have to worry about busted pipes during cold snaps,” said Dunlap.

Whether you supervise one or one hundred properties, that level of performance inspires product loyalty.