Aquatherm Green Pipe® is hydrophobic, suitable for domestic water uses, and when properly applied will not will not corrode, erode, or pit like copper or steel piping, even in areas with aggressive water.

The versatility of Aquatherm polypropylene-random (PP-R) piping has been on display at the University of British Columbia (UBC), a major university in western Canada, where a number of new construction and re-piping projects have recently been completed or are under way.

Approximately 1,900 meters of Aquatherm Green Pipe® were used in two recent projects at UBC: the new 350-bed UBC Totem Infill student residence hall (which bears the First Nations name of c̓əsnaʔəm), and the replacement of copper piping at the 634-bed Thunderbird student residence hall. Aquatherm pipe also is being used in another new housing project, UBC Gage South, which eventually will house up to 630 students. That project is scheduled for completion in 2019. 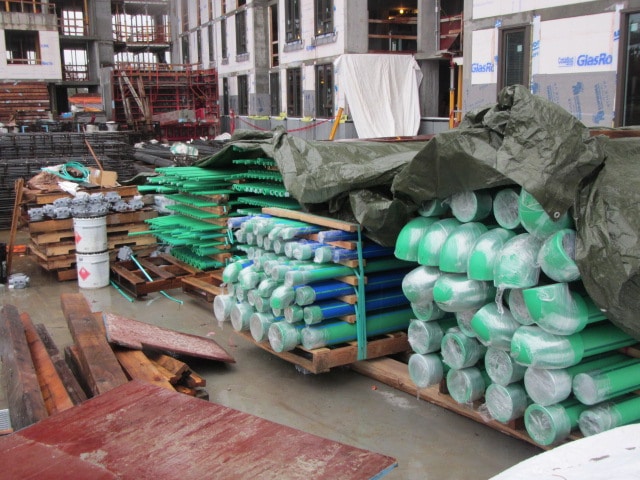 Peter Way, the Aquatherm representative at Hy-Line Sales Ltd., said a strong consideration from the university’s point of view was the environmental benefits of Aquatherm pipe. Both the university and the projects’ consulting engineers, AME Consulting Group Ltd (https://amegroup.ca/), are always looking for innovative products that have sustainability and environmental benefits. Aquatherm was selected as the piping of choice for the new residence hall in part for that reason.

“Aquatherm pipe is fully recyclable, which is important on LEED (Leadership in Energy and Environmental Design) projects, where you have to control the waste off-site,” Way noted. “So not only are you getting a great lifespan of 50 to 60 years — which you certainly wouldn’t get with traditional piping materials ­— it’s also ultimately being reused and not going into a landfill.”

“You don’t have the same heat loss [with Aquatherm] on hot water systems as you do with metal pipe,” Way said. “Aquatherm is great at retaining the heat of what’s inside the pipe.”

The PP-R pipe has a natural R-value of approximately 1 depending on the pipe size and standard dimension ratio. 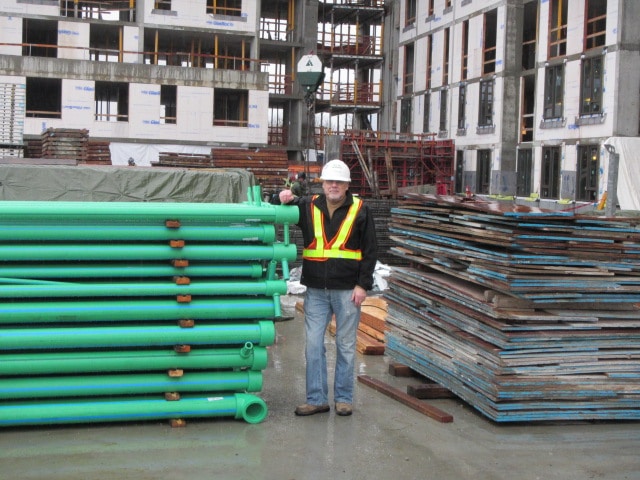 According to Way, Aquatherm has gained the trust of the university and consulting engineers in the area for re-piping projects.

“The water in the metro Vancouver area can be quite aggressive,” he said. “It’s acidic and it likes to eat metal, so copper pipe won’t last as long as the life expectancy of Aquatherm pipe systems. If you have a building that’s 10 or 15 years old and has copper piping, the likelihood is that you’re going to start getting leaks, which can be costly. When that occurs Aquatherm has become the choice for re-piping.”

Way added that the university client also likes the peace of mind that comes from Aquatherm’s 10-year warranty.

Craig Shirra, construction manager, UBC Properties Trust, said he was impressed with the rigorous testing that’s required to get the Aquatherm warranty certificate.

“For me as an owner’s rep, the warranty is very important,” Shirra said. “With Aquatherm, the contractor must go through various steps to determine the pressure, and that verifies that the system is working well. In my experience that’s quite unique. It’s not just a matter of handing over a piece of paper; there’s actual work to test the system before that warranty certificate is issued, and that gives me comfort.”

“The warranty is a not actually held by Aquatherm, as in the case of most manufacturers: it’s held by a third party,” Way explained. “So it’s more than a warranty—it’s an insurance policy that covers not only the pipe, but in the case of a failure or a problem also the damages and incidentals. I believe the current value of the coverage is around $20 million, and that is a factor for the university to feel assured that this product is going to be safe and in service for a long time.”

Finally, Way added, the durability of Aquatherm pipe was another important feature that UBC liked.

“These student buildings take a pounding,” he said. “Students are not gentle with most things. So they want a building that’s going to last, and that’s going to stand up to the rigors of what they’re designed for. That’s true of this particular facility. It’s also true of the new aquatic facility, where Aquatherm is also installed, as well as some projects coming up which will feature Aquatherm piping in laboratories.”

Mechanical contractor Trotter & Morton Building Technologies (http://www.trotterandmorton.com/) has a wide range of experience completing PHVAC projects in Calgary and Vancouver, among them residential towers, hospitals, and district energy plants. But the company’s work at the university was its first time working with Aquatherm pipe. Mechanical Foreman Erik Sundstrom said Hy-Line provided valuable training in the fusion procedures for PP-R pipe, as well as guidance regarding the proper tools needed to ensure a high-quality installation.

“When our tools arrived, our Hy-Line sales rep held a training session at our offices, so we could work with the actual tools we’d be using on the jobsite,” Sundstrom said. “Then he conducted another training on the jobsite so we could make sure everything was set up and working properly.”

Sundstrom explained that the new UBC Gage South student housing project encompasses four buildings: one of seven stories, two of 10 stories, and one of 14. Each of the buildings has a low-pressure zone and a high-pressure zone. Distribution mains on level five feed the first five floors, and additional distribution mains on level seven lead up to the roof of all four buildings.

The system delivers domestic water to all the buildings’ 630 suites, which include basic bathroom fixtures and kitchen sinks. Low-flow WaterSense showers and faucets by Symmons industries are among the fixtures chosen for this project.

SAVING TIME AND LABOR WITH FABRICATION

Sundstrom said the design of the systems in all four buildings is straightforward and repeatable.

“The student housing is very basic: there’s one main corridor where all the mains run, and all the vertical risers go straight up from there,” he said. “There’s not a lot of offsets. We pretty much go to our riser and straight to the roof.”

This repeatable design led to Sundstrom recognizing the opportunity to have much of the work fabricated. He said one fabbed riser could be used in at least 20 different locations, because the sizing, layout, and fixtures in all the units are the same. Given that, he decided to take advantage of Aquatherm’s Design and Fabrication services to help save labor costs in the field.

“We basically just did a line drawing of our risers, provided some dimensions, and sent it off to the Aquatherm fabrication team in Lindon, Utah,” Sundstrom said. “They sent a draft back to us to ensure we received exactly what we needed, and we ended up ordering about 75 percent of the project ahead of time. Approximately 1,500 joints were done before we even started pouring concrete.”

“The light weight has been a real bonus,” he said. “With copper, we could only put 12 ft in the air at a time. Here we can fuse together 20- or 30-ft runs, and put the whole length up in the air without worrying about the weight. With the prefabricated risers, we just passed them up a floor or two. If we had used copper, we would have had to get a crane and fly it all in. The 10 prefabricated bundles we received from Aquatherm were easily distributed in just a couple of days.”

Finally, Sundstrom noted that jobsite theft of copper piping is not a concern when using Aquatherm PP-R pipe.

“You’re always worried about losing your copper,” he said. “I’ve seen entire shipments dropped off on a Friday and gone on Monday.”

Trotter & Morton has done work on the university’s campus for more than four years and recently completed work on an 18-story wood frame student housing building, which Shirra said is currently the tallest mass timber building in the world, and a very important project for UBC.

Sundstrom said there was a huge concern about welding and having open flames in a wood building, and using Aquatherm’s PP-R pipe — which does not require welding or a flame watch — would have provided a nice advantage.

“The wood frame building was a very successful project for the campus, so of course now everyone in North America plans on doing one,” Sundstrom said. “Aquatherm would be a huge help in such buildings, because any open flame on a wood tower is a very big concern.”

In fact, the product has shone in similar applications like the Arbors at Baltimore Crossroads in Maryland.

Way welcomed Trotter & Morton into the fraternity of contractors who have discovered the advantages of Aquatherm. A number of other contractors and mechanical engineers have undertaken or completed projects using Aquatherm at UBC over the past several years, including Alpha Mechanical, Stantec Consulting, GML Mechanical, AME Consulting, Daryl Evans Mechanical, Omega Mechanical, and BMS Mechanical.

Way noted that although Aquatherm has been used globally for many years, it’s still relatively new to the North American market. This may lead some contractors and tradesmen to be initially hesitant to try it. However, once they try it, they like it.

“Some contractors kind of turn away from polypropylene pipe and say, ‘I’m a traditionalist, I want to use copper,” Way said. “And although it’s true that you must develop a particular skill set to work with Aquatherm pipe, once the tradespeople try it they say, ‘Oh, this is cool.’ Training and support are provided by the Aquatherm team at the local level, and even those who were initially very reluctant to work with it are now fans. They discover that this is what they want to work with.”