Aquatherm pipe in sizes ranging from ¾-in. to 24-in. was installed at the Seminole Hard Rock Hotel & Casino.

Choosing Aquatherm polypropylene-random (PP-R) pipe allowed the installation crews
to move, mobilize, and fabricate the pipe quickly and efficiently, and moved the project ahead of schedule

On a project as highly anticipated as the expansion of the Seminole Hard Rock Hotel & Casino in Hollywood, FL, the ability to meet tight construction schedules is paramount.

Guests are awaiting twice the amount of casino space, a Bora Bora-inspired pool paradise, an iconic hotel tower in the shape of a giant guitar, a new Hard Rock Live arena, and much more. It will be the ultimate venue for accommodations and entertainment when Super Bowl LIV comes to Miami in February 2020, so it must be good to go well before then.

With so much on the line and no time to waste, Suffolk-Yates, the general contractor, brought in the experienced team at Kirlin to handle the piping installation for the casino’s heated and chilled water systems.

Kirlin Senior Vice President Troy Norris said the company knew its approach would have to be as innovative as the Seminole Tribe’s $1.5 billion project itself, and they were ready to take on the challenge. 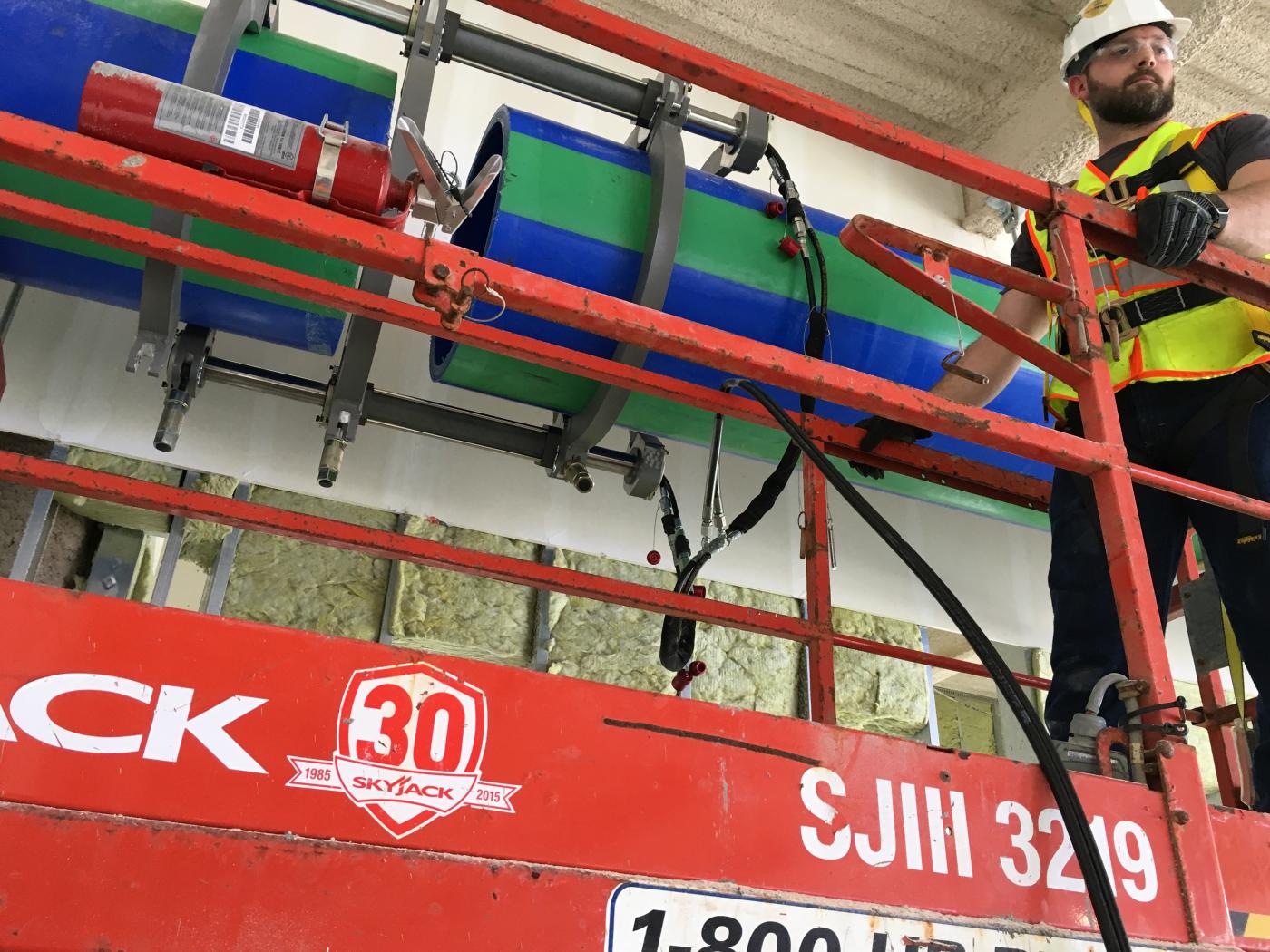 Trying to weld large diameter pipe overhead in tight spaces can be difficult and time-consuming, but the decision to use heat-fused Aquatherm pipe helped keep this project on schedule.

Kirlin needed to fabricate and install a piping system to connect a central chiller plant to all of the casino’s outlying buildings, including the iconic guitar-shaped hotel and spacious pool area. The company had originally planned to use carbon steel joined with mechanical couplings for the casino expansion and remodel, but when asked to take a second look at the job site setup they decided that the situation called for a more innovative approach.

To that end, Kirlin researched various products and methods to help mobilize the job and make sure it stayed on schedule.

In the process, Kirlin liked what they learned about Aquatherm polypropylene-random (PP-R) pipe. Aquatherm’s benefits included weight up to 70 percent less than metal pipe, which allowed the installation crews to move, mobilize, and fabricate the pipe quickly and efficiently with less fatigue and risk of injury; an anticipated life span of 50 or more years; resistance to corrosion and scaling; and virtually leak- proof heat-fusion connections that require no welding, open flames, or fire watch.

After seeing what it offered, Norris said Kirlin abandoned the conventional welded system and adopted the fusible PP-R piping system as its new build strategy.

OVERCOMING THE CHALLENGE OF TIGHT SPACES 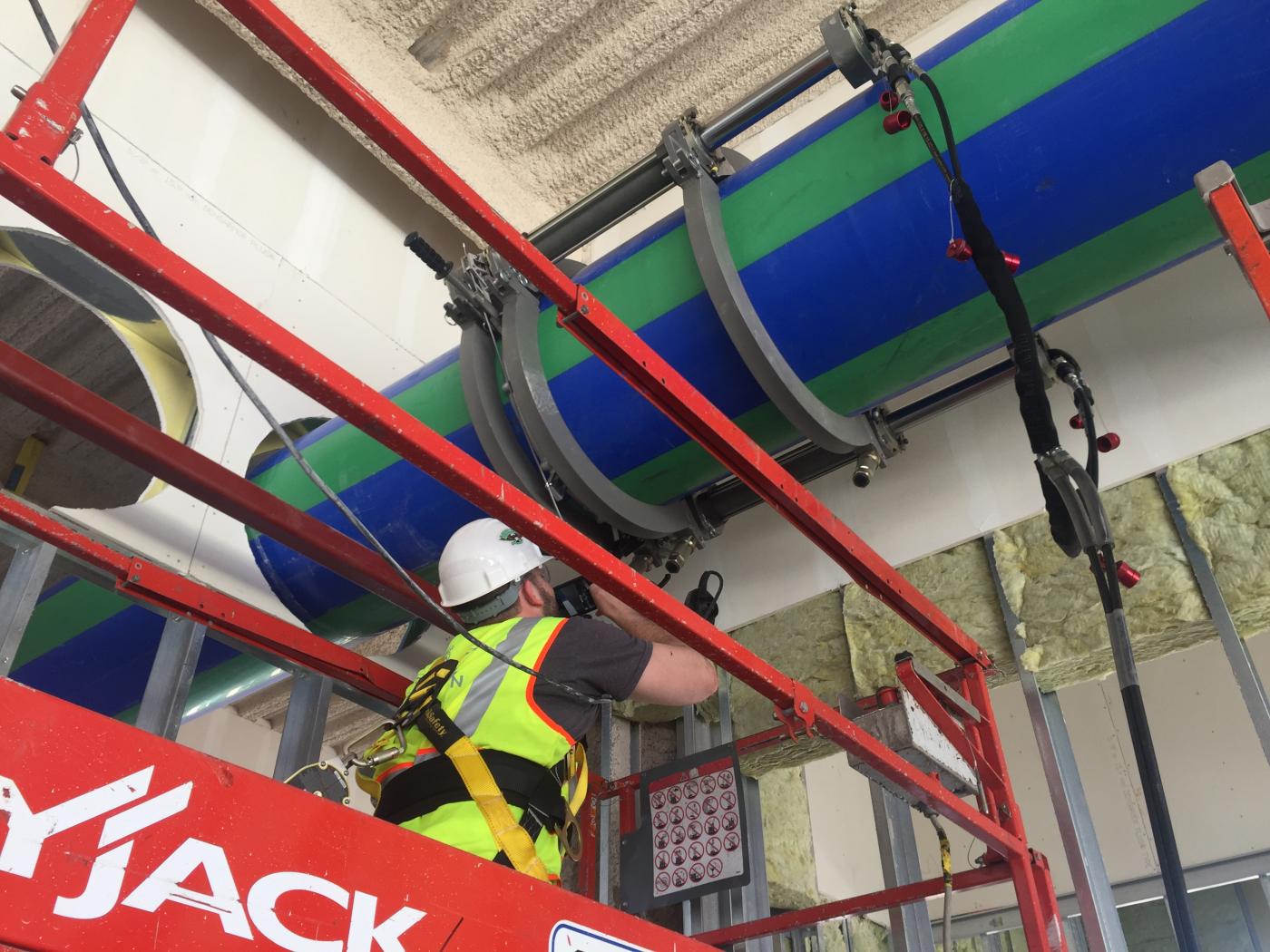 But Kirlin had another challenge to face — fusing large-diameter (24-in.) pipe with heavy fusion equipment that didn’t seem ideally designed for working in tight spaces. Kirlin discussed this with the local Aquatherm distributor, and found that the distributor was able to offer a prototype butt fusion machine from McElroy, a longtime fusion machine manufacturer based in Tulsa, OK. The prototype was lightweight and designed specifically for work in close quarters.

Once Kirlin tried the prototype machine, Norris said they didn’t look back. It was unobtrusive to work with, easy to handle on a scissor lift, and featured a lightweight, modular carriage. After successful field testing on this project and others, the prototype became the Acrobat™ 630 featuring a QuikFit™ carriage. It was launched in the summer of 2018.

The Seminole Hard Rock Hotel & Casino project was the first opportunity to use the new Acrobat 630 on an indoor install of large-diameter PP-R pipe, and the machine worked very well right out of the gate. Almost all of the work on the 24-in. pipe was overhead and between walls; that meant nearly all of the fusions on the 24-in. pipe were done in the air on a scissor lift. But instead of having to lift the fusion machine’s entire carriage, Kirlin’s crews were able to remove the top jaws and place the cylinder assemblies, lower jaws and guide rods on the pipe first. The top jaws and other components were then assembled around the pipe by hand. For smaller pipe on the project, Kirlin purchased two Acrobat 250 models, which butt fuse up to 8-in. pipe. For socket fusion, they used hand tools and leased several McElroy Spider™ 125s.

Kirlin’s fusion operators were new to PP-R pipe and there was admittedly a learning curve. It was a product that changed their entire build modality, so good training was crucial. 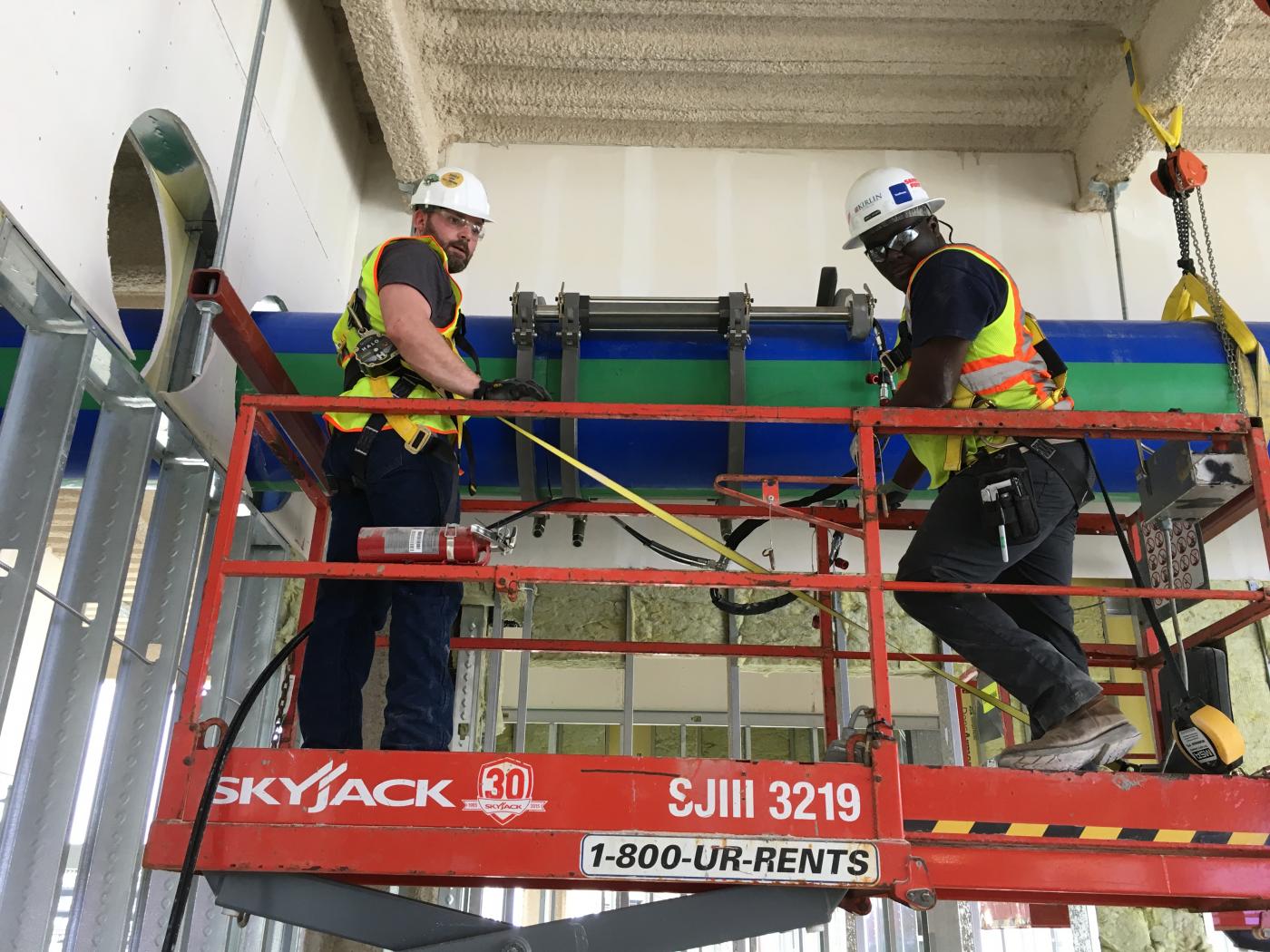 “[The local Aquatherm distributor] did a phenomenal job of putting on numerous trainings,” Norris said. “They also were instrumental in having McElroy’s team engaged with us onsite.”

According to Norris, although Kirlin’s installation crews had to get used to working with a new pipe material and different fusion equipment, they were able to be very productive once they got to fusing.

“I know we’re getting more proficient with the more time the guys spend working with the product,” Norris said. “When we initially started out, we were approaching building strategy similar to carbon steel. Now we’re seeing more footage of PP-R pipe going up every day.”

There were multiple construction projects going on simultaneously at the Seminole Hard Rock Hotel & Casino, and Norris said the light weight of PP-R was instrumental in keeping things moving on the piping end. He noted that handling and transporting the PP-R pipe is dramatically easier than steel would have been.

“Aquatherm allowed us to hang long runs of it overhead and get more pipe in the air quickly,” Norris said.

A significant portion of the fusion was completed offsite at Kirlin’s shop in West Palm Beach, about 20 miles north of the site, and Norris said that sped up the schedule greatly. The company scheduled pipe deliveries for nights and off hours, allowing them to maximize the amount of fusion work completed during the day.

An overhead run of large-diameter Aquatherm pipe being hoisted into place. Note the prototype McElroy Acrobat™ 630 fusion machine’s jaws on the pipe.

In all, this project incorporated about seven miles of Aquatherm Blue Pipe® in various sizes from 3⁄4-in. up to 24-in. for the expanded Hard Rock. Kirlin’s team was able to install around 700 feet of 24-in. pipe in about eight days. In addition, about 3,000 ft of Aquatherm Green Pipe® SDR 11 and SDR 7.4 MF, 2-in. through 8-in., was used for the domestic water mains in the casino expansion.

In addition to fast installation, Aquatherm pipe provided durability and longevity. It’s virtually leak-free fusion connections are desirable in “mission-critical” settings such as data centers or (in this case) gaming rooms, that must remain operational 24/7.

Using Aquatherm pipe allowed for installation of a significant amount of piping in a short timeframe and enabled Kirlin to overcome the project’s “need for speed” and actually move ahead of schedule.

Before this project, Norris said that Kirlin routinely used carbon or stainless-steel pipe. But he thinks that will change in the future when bidding on projects where they see PP-R pipe being a great fit.

“Honestly, this job has kind of changed our building strategy as well,” Norris said. “Now that we’ve gone through the learning curve, we don’t want to lose that momentum.”