Aquatherm Blue Pipe® has been proven in breweries across North America, and it added a nice element of color that really pops against the brick walls of the pub 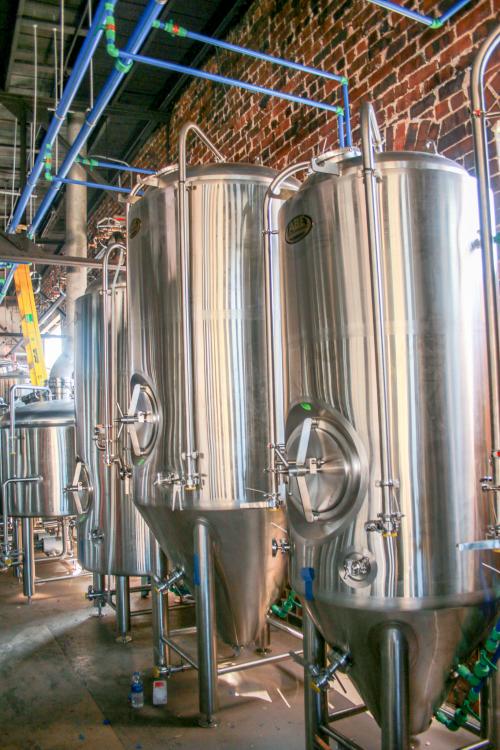 “I was a military brat before going into military myself, and when I went to high school in Germany the legal drinking age was 16 and the beer was good!” McClain recalled. “When I eventually got back to the States, craft brewing really hadn’t taken off and the few German beers I could find weren’t as good as my recollections of what they should be. So I got into home brewing.”

As McClain pointed out, many home brewers dream of taking their operation to the next level—if life permits.

“In my case there were always responsibilities that prevented me from doing so,” he said. “Now I’m finally at the stage in life where it’s not irresponsible for me to pursue this passion, so now is the time.”

That led to the creation of the Drop the H Brewing Co. To understand the name “Drop the H,” this new brewery and gourmet pizza restaurant is located in Pittsburg, Kansas—which is not to be confused with the Pittsburgh in Pennsylvania.

LEAVING NOTHING TO CHANCE

As a commercial airline pilot, McClain is not one to leave things to chance. He researched every aspect of brewery operations, from gaining brewing expertise through the noted Siebel Institute of Technology  to taking an online certificate course in the business of craft beer through the University of Vermont. That same attention to detail extended to his interest in Aquatherm piping for the pipes that carry glycol from his brewery’s process chiller to the facility’s 16 fermentation and serving tanks.

“As this was my first venture into professional brewing, I didn’t have preconceived notions and was open to all ideas,” McClain said. “I was doing research on the glycol lines and Aquatherm pipe intrigued me. I knew I wanted a system that was bulletproof reliable and I really liked Aquatherm’s warranty and its ease of operation. Although I could have gone cheaper upfront, I know that cheaper is not always what’s best in the long run.”

McClain also watched the “Brewing with Aquatherm” video (https://aquatherm.com/videos/brewing-with-aquatherm) and the “Why Brewers Love Working with Aquatherm” video (https://aquatherm.com/videos/why-brewers-love-working-with-aquatherm) on the Aquatherm website, and was impressed by the testimonials from other brewers. 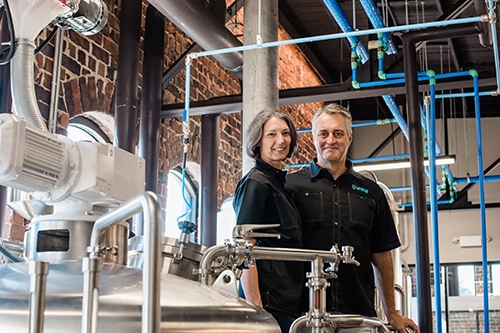 For the installation of the pipe, McClain turned to Satterlee Mechanical in nearby Joplin, MO. This was Satterlee’s first experience working with Aquatherm pipe, and the company’s installers received training in their shop from Brandon LeMasters, outside sales rep for Star Wholesale Supply, and Ryan Epstein, an Aquatherm Product Specialist at Johnson & White Sales Company.

Dale Benedict, a project manager at Satterlee said that at first—as with anything new—half of the installation technicians thought Aquatherm pipe and its heat fusion joining method were pretty cool, while the other half weren’t quite sold on it.

“Sure, some of the guys were skeptical, but that’s always the case,” LeMasters said. “It can be hard to get people to think of piping other than steel or copper. But the people around here who have tried Aquatherm really like it, and that also was the case with Satterlee’s team.”

LeMasters and Star Wholesale supplied all the piping and fittings and visited the jobsite regularly throughout the installation to check on Satterlee’s experience with the build. This project called for 400 ft of 2-in. and 450 ft of ¾-in. Aquatherm Blue Pipe® SDR 11, which was installed by Satterlee’s team between June and September 2019. Satterlee’s crew installed the pipe using two sets of McElroy socket fusion irons and one McElroy Spyder™125 fusion machine. One installer worked on the 2-in. mains and another handled the ¾-in. drops to each piece of equipment.

LeMasters said it wasn’t long before he started to hear positive feedback from Satterlee’s team. They were impressed with the ease and speed of installation, and also were very happy with Aquatherm’s light weight.

“A 20-ft section of ¾-in. Aquatherm weighs a about a quarter of what the same length of steel pipe weighs,” LeMasters noted. “It’s much easier for the installers to work with.” 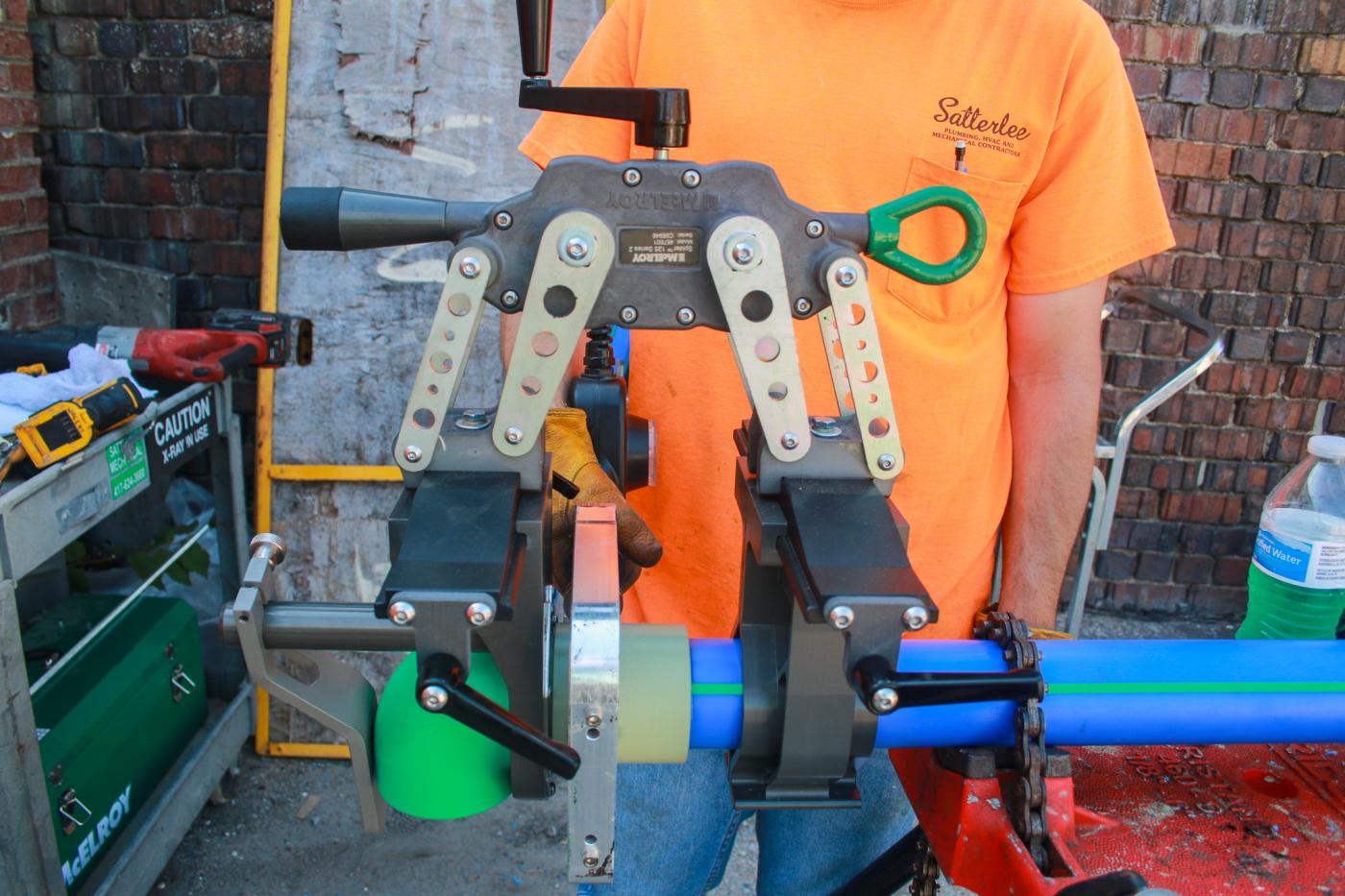 A technician from Satterlee Mechanical performing a heat fusion of Aquatherm pipe at Drop the H Brewing Co.

Ultimately, Aquatherm’s ease of installation and leak-free performance ended up impressing even the early skeptics.

“When we did the pressure test, we found no leaks on that entire system with thousands of joints installed,” Benedict said. “That’s what really won the installers over. They knew if it was a copper system it would have taken them a long time to braze all the joints. Threading is very cumbersome too, and with threaded pipe you always have leaks. So the guys were impressed that we never had any leaks with all the joints we did.

“We were very careful to do everything by the book, and in our experience if you follow the training and the guidelines Aquatherm just plain works,” he added. “In addition, the product support and warranty are great. It’s a quality product and it’s nice for our guys to know they don’t have to go back and babysit it.”

Benedict said the success Satterlee had with Aquatherm at Drop the H Brewing Co. has him thinking of other opportunities to use the pipe, and also lamenting that they didn’t discover it sooner.

“I can see such a benefit when it comes to larger pipe sizes, compared to welding or brazing,” he said. “I wish we could have used Aquatherm at a dental school project we did last year, which had a 6-in. copper water line running right through the middle of the building. It took us a long time to braze that 6-in. pipe; we could have saved ourselves and the customer a tremendous amount of time by using Aquatherm.”

Beyond ease of installation, performance, warranty, and all the other factors that he considered, there was another reason McClain insisted on Aquatherm: the pipe just looks good.

“Mark McClain wanted the brewery to look like a showroom, and he loved the colored piping,” Benedict said. “And he didn’t like the look of pipe insulation. So we didn’t insulate any of this and we’ve had no problems with condensation even though we’re running 42°F  glycol though a 70°F ambient. Mark was very happy about that because it was important to him to show off the pipe’s bright color.”

McClain admits he loved the idea of the modern, blue piping in his 100-plus-year-old building.

“We gutted and renovated the building, but we kept many of the rustic elements,” he said. “I like the juxtaposition of the old and the new and the way they play off each other, and I’m happy to say that not only does the blue pipe work great, it looks amazing!”