A PEACH OF A PROJECT - Aquatherm

A PEACH OF A PROJECT

Replacing the deteriorating and leaking HVAC piping in an occupied, 22-story condominium building with tight mechanical blockouts between floors

Lightweight and virtually leakfree Aquatherm Blue Pipe® was installed with no flame or welding, and the fast installation speed made possible by offsite fabrication caused minimal disruption for the residents 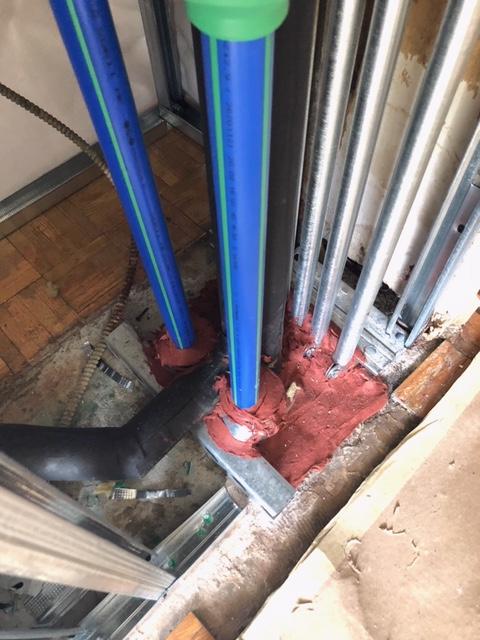 At Windsor Over Peachtree, the piping had to run through 8-in. thick concrete floors with 10-in. square blockouts.

It’s never a good thing when your building is known as “the leaky building.”

That, however, was the unfortunate reputation of Windsor Over Peachtree, a 22-story, 265-unit condominium building in Atlanta. The vapor barrier on the 53-year-old building’s existing steel and copper piping had deteriorated, and the condensation that was forming on the pipes was causing them to break down from the outside in. The combination of leaks caused by age and damage caused by dripping condensate was proving to be a regular and ongoing challenge in the building, and the need for an upgrade was apparent.

“The management and maintenance staff had been chasing leaks for years,” said Jeff Long, Southeast District Product Manager, Commercial Group, Ferguson. “We had several discussions with them about changing out the piping.”

As might be expected in a half-century old building, the challenges with the HVAC system ran deeper than just the piping. Foremost among the other issues was that the old two-pipe fan-coil system was struggling to keep up with the cooling demand during Atlanta’s hot summers. So when the money for an HVAC system upgrade was allotted, it was decided that a new system of water-source heat pumps – sized to handle the building’s 500- to 600-ton cooling demand – would replace the old fan-coil system that had been sized for a 300-ton demand.

‘NOT YOUR TYPICAL PLASTIC’

Windsor Over Peachtree is a 265-unit condominium building built in 1965.

“This wasn’t your typical job where an engineer draws up a spec and everybody follows it,” Escher said. “We worked closely with the engineer and the building owner in a collaborative effort to determine the best equipment and the best piping system.”

Escher was on board with the conversations between the building owner and engineering firm about using Aquatherm, but he also wanted to see for himself the benefits of PP-R pipe.

“Everyone has an ‘a-ha!’ moment when it comes to choosing PP-R pipe, and before it was determined that we were going with Aquatherm we visited Joe at his shop,” Long relates. “We put together some sections of 2½-in. pipe, and Joe tried to drive a nail through them with a hammer. I remember him reporting back and saying, ‘This is not your typical plastic.’”

Escher pointed out that he also researched the pipe using more sophisticated methods, but he does not discount the value of the hammer-and nail test.

“Aquatherm is a plastic, but don’t even consider equating it to something like PVC or CPVC,” he said. “If you look at a cross-section of it you can see that it doesn’t even compare to those pipes. It’s in a class of its own.”

Ultimately, the decision to use Aquatherm pipe to serve the new heat pump system was an easy one.

“The building management didn’t want to use any flame or welding in an occupied building, and the project’s engineer didn’t like the idea of having a copper-press system behind the walls,” Long explained. “That gave us the opportunity to discuss Aquatherm pipe, and it turned out to be the perfect solution for this retrofit.”

IN WITH THE NEW 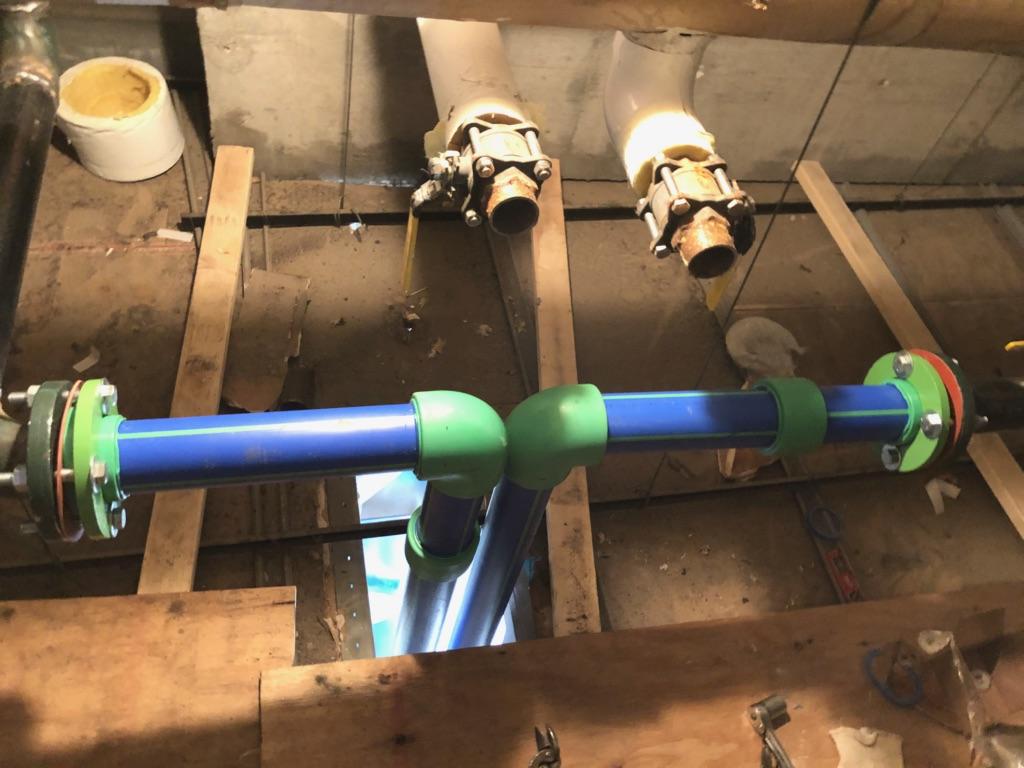 At this project, Aquatherm Blue Pipe® replaced an old and leaky system composed of steel and copper pipe.

At the Windsor Over Peachtree project, more than 6,000 ft of Aquatherm Blue Pipe® SDR-11 ranging in size from ½-in. to 4-in. was installed, along with new Raypak boilers, Evapco cooling towers, Bell & Gossett pumps, and JCI-branded Water Furnace water-source heat pumps.

Installation was made challenging because the floors were concrete slabs 8-in. thick, with blockouts approximately 10-in. square in identical locations from the fourth through the 20th floors. The existing risers went straight up through the blockouts without any offsets.

It was determined early on that the ability to fabricate Aquatherm offsite and transport the fabricated spools to the jobsite ready to install was going to be an important component of this project. Escher personally drew up the 16 sets of risers needed for the project and they were fabricated at Ferguson’s facility in Fulton, MS. The risers consisted of 1¼-in. through 4-in. pipe, with ¾-in. runouts.

“The fabrication was right on the money,” Escher said. “We had more than 4,000 joints in this system, and we had five leaks. On a typical solder job we’d expect around three percent. So we were very impressed with the extremely minimal leakage of the Aquatherm.”

Also impressive was the time savings of the off-site fabrication. Escher estimated it saved about four to five days per riser.

“It really worked out well to have Ferguson’s people fabbing and our people installing,” he said. “Ferguson had all the fabrication equipment and lower labor rates than what we pay our pipefitters. So when you combine the lower labor rate and the better equipped shop minus the cost of freight, they were very competitive.”

In addition, Escher said, having the fabrication done offsite allowed his company to use its shop personnel in the field.

“The result is that without adding any costs we were able to dramatically reduce the time to complete the project,” he said. “This was very important because whenever we took a riser out of service we had about 20 condos that did not have heating or cooling until the new Aquatherm piping and WSHPs were installed and operational.”

Escher noted that the light weight of PP-R pipe provided an added benefit.

“We had to take all the piping up in elevators, in nine-foot maximum sections, and even the four-inch pipe could easily be carried and handled by one person,” he said.

The installation and onsite heat fusions were performed by Escher’s team using McElroy irons and McElroy Spider® 125 Chain Clamps, which allowed heat fusions to be performed in the tight quarters of the blockouts.

“The Chain Spider allowed Escher’s team to get up against the wall like they needed to,” Long noted.

Unistrut Metal Framing Systems and Walraven hangers were used to position the new piping spools in the existing blockouts.

“It was very simple and it worked perfectly,” Escher said. 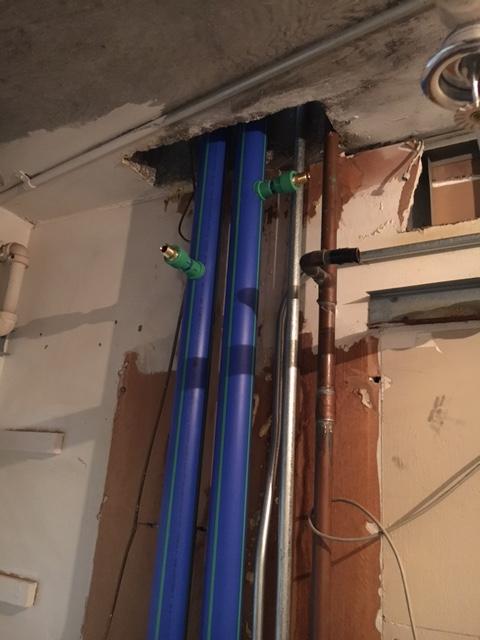 Aquatherm pipe was able to be heat fused and installed in tight quarters without welding or open flame, which was extremely important in an occupied building.

Other piping options such as steel and copper were initially considered for Windsor Over Peachtree, but the engineer had misgivings about those options in an occupied building.

“We were looking for a way to avoid welding or brazing pipe in an occupied building,” said Tim North, P.E., LEED AP, principal, Johnson, Spellman & Associates Inc. “The fact that no hot work permit was required was an important factor for us in selecting Aquatherm. It was the best solution in an occupied building.”

In addition, Escher noted that unlike welding, Aquatherm’s heat fusion process gives off no fumes or VOCs. That added to its attractiveness for Windsor Over Peachtree.

Although this was Escher’s first opportunity to use Aquatherm PP-R piping on a large-scale project, he and his team already feel like old hands with it. And he offered some advice to other contractors and engineers who are considering Aquatherm for a piping project.

“Do what we did,” Escher said. “Investigate it, look at other projects that have used it and talk to contractors who have installed it. You’ll find the same things I did: it’s tough, it’s lightweight, leaks are almost non-existent, and it has a builtin insulation value that may allow you to reduce the thickness of the insulation. In addition, the lack of flame and welding makes it very well suited for retrofit projects.”

Offsite fabrication done by Ferguson helped speed this project along, as ready-to-install risers were shipped directly to the jobsite.

The fine aesthetic value of Aquatherm compared to steel also shouldn’t be overlooked, Escher added. “This system is running at 45°F to 90°F and didn’t require insulation,” he said. “However, we have some runs that are exposed in corridors, and if we had used steel pipe we would have had to paint it. Aquatherm, on the other hand, has an attractive exterior.”

A final bonus for Escher and his people on this project is something that can be all too rare in the construction industry: appreciation. The building went from a two-pipe system where the main HVAC system was either in heating or cooling mode to a system that can provide concurrent heating and cooling based on individual occupants’ preferences.

“Many tenants have been blown away by how comfortable it now is in their spaces,” Escher said. “We got tons and tons of compliments. So it was a very good project for us. The condo owners are happy, the building management is happy, and it worked out well for us. We’re very pleased and proud of this job.”