Acid was eating a Tennessee middle school’s HVAC piping system from the inside out, so a chemically stable piping solution was needed to replace the disintegrating steel within a very short timeframe.

It was never determined exactly how acid got into the HVAC piping at a Tennessee middle school, but the school had been battling the corrosive 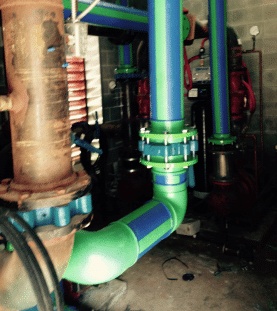 effects almost since it opened in the early 2000s.

The problems were severe. Steel pipes literally were disintegrating from the inside out, and the decomposed pipe matter was clogging up pump strainers, heat exchangers, and even the condensers inside the water-source heat pumps (WSHPs) that heated and cooled the school. The school tried everything to remedy the problem, including adding additional strainers and draining and refilling the system several times. But the debris kept accumulating to the point that the strainers had to be serviced almost daily.

That’s what happens when acid is introduced into a steel piping system. The acid attacks the pipes and continues to do so regardless of how many times it’s flushed. It’s possible to slow the corrosion, but you can never completely stop it.

In 2014, after enduring several years of relentless maintenance, the school finally had all of the steel HVAC piping replaced with Aquatherm Blue Pipe® polypropylene-random (PP-R) piping. A uniquely stable material, PP-R pipe does not contain harmful chemicals or react with its surroundings. 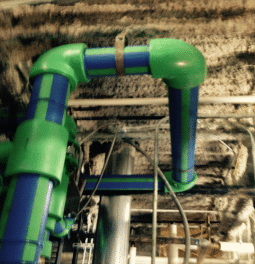 The mechanical contractor that was awarded the piping project had to replace every last inch of the 3-, 4-, and 6-in. steel pipe between the WSHPs and the copper distribution pipe.

From start to finish, the contractor had only one week during the school’s fall break to remove all of the steel piping and replace it with Aquatherm. To save time, workers began by preassembling sections of 6-in. Aquatherm Blue Pipe into 45-ft lengths on-site at the school a couple of days before the break. As soon as classes let out, workers drained the system and began working around the clock to remove all of the existing steel piping. This required cutting it apart with torches and hoisting it out in 10-ft sections.

Fortunately, that was the last of their heavy lifting. Aquatherm Blue Pipe is extremely lightweight; the SDR 17.6 pipe that was used weighs just 2.93 lb. per linear ft of 6-in. pipe. Thus, 45-ft sections could be carried and lifted into place with just three workers—no rigging equipment required.

Once the piping was positioned inside the pipe hangers, a Ritmo America Delta Dragon self-aligning hydraulic butt fusion machine and heating iron were used to join the inline pipe sections together. The butt fusion tool is light enough for the elevated piping to support it during the fusion process.

Butt fusion, the process of using heat and pressure to join the faces of two pieces of pipe together, typically is used on Aquatherm pipe sizes 6 in. and larger. This eliminates the need for a socket-type fitting while maintaining the full strength of the connection. Heat and pressure are applied in prescribed amounts to fully fuse the pipe lengths together so that the bonded area is actually stronger than the pipe wall itself.

For smaller diameter pipe, the contractor used socket fusion to join lengths of pipe together. Socket fusion involves using a fitting or “socket” over the two pieces of pipe, then applying heat and pressure to fuse the inner wall of the fitting to the outer wall of the pipe, again forming a bond that is stronger than the pipe itself.

In either case, Aquatherm’s unique heat-fusion process results in a fully continuous pipe material, as though the entire piping configuration was one singular part, with no leak paths. Most importantly for the middle school, Aquatherm Blue Pipe is made of a chemically stable thermoplastic material that is non-corroding and does not react with water or most dissolved chemicals.

In all, approximately 1,500 ft of piping was replaced at the middle school in the span of one week. According to the mechanical contractor’s president, the timeframe would have been impossible if his firm had used steel piping.

“If we had used steel on this project, we would have had to have rigging equipment onsite and put every joint together by hand. In addition, all outlets would have had to be welded, which is a huge fire hazard,” he said.

According to the president, even though commodity materials like steel can be cheaper than polypropylene pipe, the installation process is so labor intensive that contractors end up charging more for the project. With Aquatherm, the job goes up faster and typically costs less. The additional reliability is a no-cost perk.

The middle school is one of several schools in the area that have experienced some degree of pipe corrosion and have selected Aquatherm as a replacement. A local Aquatherm manufacturer’s representative has been involved in each of the projects and believes that Aquatherm is the best choice for schools. In addition to being non-corrosive, he cites safety as a top reason why schools should consider the product for their domestic hot water, heating water, and/or cooling water systems.

“If there’s a fire, Aquatherm does not release harmful toxins like other plastic pipe materials. It gives off CO2 and water vapor, so it is as safe as the air we breathe. It also has a 60-year life expectancy—much longer than other plastic pipe materials,” he said. Additionally, the heat-fusion connection method allows retrofit work to be done without an open flame, and its weight, which is lighter than metal, provides further worker safety benefits.

According to the manufacturer’s representative, his company was the first in the country to buy a container load of Aquatherm pipe. The company also has coordinated installation training for at least 50 contractors in the Tennessee area and provided technical and installation support on numerous projects.

“We’ve worked hard to get contractors and schools onboard with the product. We want them to know that we are there to assist them through the learning curve. Because once you’re trained, it really is an easy product to install,” he said.

The mechanical contractor has fully embraced PP-R pipe. Both Aquatherm Blue Pipe (for HVAC, compressed air, and industrial applications) and Aquatherm Green Pipe® (for potable water and food-grade applications) have become the mechanical contractor’s “go-to” piping solution for schools, hotels, and other facilities. The middle-school project was just one of many several successes he and his company have completed using PP-R piping, and he has several more in the works.