A beer-hobbyist-turned-professional needed a glycol piping system for the craft brewery he wanted to build inside a 1920s brick wholesale facility. 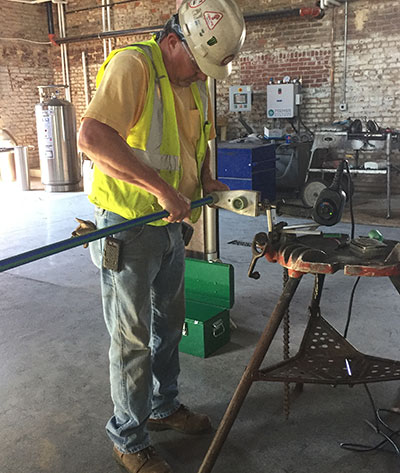 Since 2011, the number of U.S. craft breweries has increased in every state, including North Carolina, which currently ranks ninth in the country for its relatively high number of craft breweries. Fortunately for beer-hobbyist-turned- professional Sam Victory, there’s still plenty of room in his home state for per capita craft-brewery growth. Victory, a professional chemist as well as head brewer, and his partners Jason Morehead and Mike Beverly, opened the doors to Wise Man Brewery in Winston-Salem, NC, in January 2017. Bringing this dream to life was a long and arduous process that made Victory appreciate the easier parts of starting a brewery—like choosing reliable and easily expandable glycol piping. His selection of Aquatherm polypropylene-random (PP-R) pipe for Wise Man’s glycol piping system puts him and his partners in a good position to keep up with North Carolina’s growing thirst for craft beer.

“Aquatherm has all of the physical properties you want for brewery piping. And the price is comparable to if not better than other piping systems of similar quality,” said Victory, who coordinated most of the construction at the brewery.

As head brewer, Victory was especially involved in the selection of equipment for the brewing process and spoke extensively with other professional brewers throughout the state about their own systems. Certain names kept coming up, including Aquatherm.

Aquatherm’s rep for South Carolina introduced Victory to Aquatherm Blue Pipe®, which has become a frequent alternative to copper and steel in many cooling applications. Like all Aquatherm PP-R piping, it has an extremely low instance of leaks or failures as a result of the heat-fusion method used to join piping components.

A revelatory moment came when the rep used a pipe cutter to slice through Victory’s first heat-fused joint to reveal a perfectly homogeneous cross-section of pipe, with no borders, seams, or bubbles present. 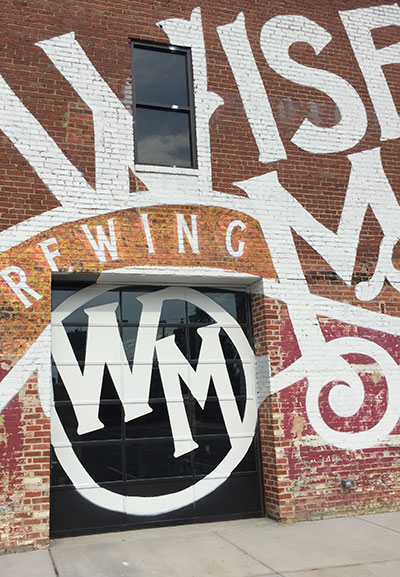 “That was impressive,” Victory recalled.

The moment resonated with Victory, who, along with his partners, has endured all of the stresses, delays, and setbacks that come with starting a brand new, highly regulated business. Like many craft breweries, the Wise Man partners opted for the character and location of an existing downtown structure—in this case, a circa-1920, two-story brick structure and former wholesale space. With 7,400 sq ft of space and ample parking, the location was well-suited for the brewery and a taproom, but like any old structure, it came with numerous construction challenges.

Fortunately, selecting the glycol piping was not one of them. After that first hands-on introduction to Aquatherm, Victory never considered any other pipe. 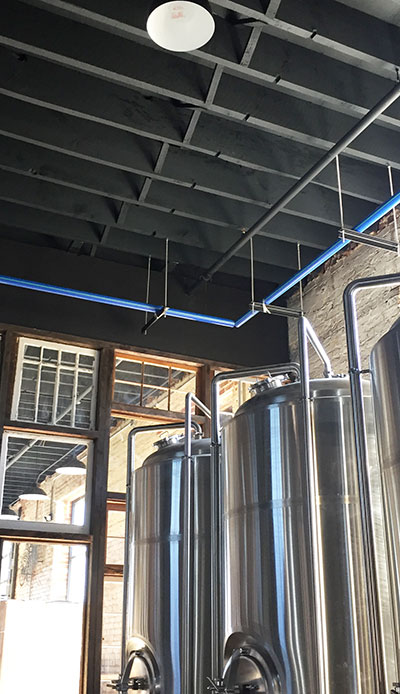 ONE LESS THING TO WORRY ABOUT

The Wise Man partners appreciated the extra insurance that comes with specifying Aquatherm pipe, most notably the 10-year manufacturer’s warranty that covers parts replacement, personal injury, and even loss of use, up to roughly $20 million per incident, which applies to systems installed by certified Aquatherm installers. They were well aware of the devastating consequences that a glycol leak could have to their production and taproom service.

“You worry about all that because those pieces are part of the production and need to be as sound and reliable as possible,” Victory said.

That reliability is a function of both the pipe composition and the heat-fusion method that is used to install Aquatherm PP-R, one of the longest lasting and most chemically inert piping materials available. It does not corrode, scale, or pit like metal pipes, and its heat-fusion process eliminates the need for any glues, resins, or open flames. When heated, PP-R changes to a molten-like state so that two pieces can be joined together easily. As the product cools, PP-R molecules bind together to create a solid piece of material with no weak spots.

The size of the pipe determines the type of fusion equipment that should be used. In applications such as Wise Man that require 4-in. pipe or smaller, a hand-held welding iron is the only tool that is needed to create a leak-proof connection.

The Aquatherm Blue Pipe at Wise Man connects a ProChiller outdoor condenser and indoor evaporator to the fermentation tanks and cold water vessel as well as a plate heat exchanger that is used to cool the beer wort. The glycol loop is maintained at approximately 28°F during the fermentation process. 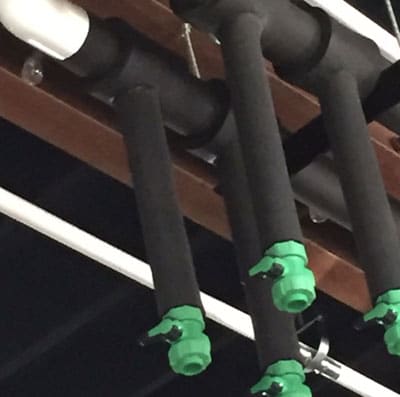 The system was installed by Superior Mechanical Services of Kernersville, NC.

It was a simple installation according Jim Fields, Vice President of Superior Mechanical, despite it being the first time his crew had ever worked with Aquatherm.

“Honestly, these types of systems are just as reliable as metal pipe systems. They look better and are simpler to install. I’d like to see more engineers specify them,” Fields said.

Superior Mechanical has specialized in the installation of all types of fluid piping systems from small process applications to complex central chilled-water systems for more than 30 years. The Aquatherm rep got a two-man piping crew up to speed with the Aquatherm piping systems during a two-hour training session at the Wise Man jobsite. A few days later, the newly trained Aquatherm pipefitters installed approximately 300 ft of 2-in. PP-R header pipe and about 300 ft more of 1- and ¾-in. branch piping, including several extra fusion outlets so additional fermentation tanks can be added to the glycol loop in the future. Fusion outlets are easy and can be installed very quickly. They can be added simply by drilling a hole into the existing pipe and heat-fusing a fitting directly to the pipe wall, so that there is no need to cut through the pipe and insert a “T” to accommodate additional branch piping. The system passed all leak tests and inspections without issue. 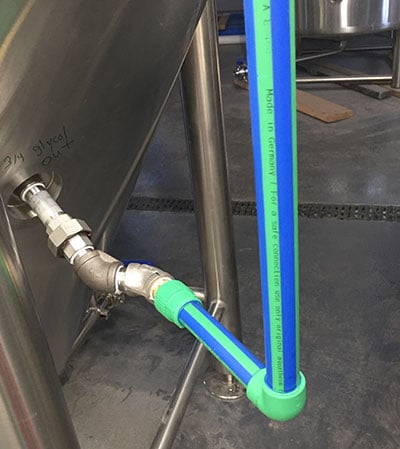 “There’s a lot to like about Aquatherm,” said Fields, whose pipe-fitting standards were shaped by his father who founded Superior Mechanical.

In the 1970s and 1980s, labor was more plentiful and contractors could afford the time to be meticulous in the finishing of each joint, something Fields’ father demanded. It’s far more challenging in modern times, given the ever-dwindling number of skilled welders. Aquatherm heat fusion, however, relies on a more easily acquired skill set to achieve an installation that is just as reliable and aesthetically pleasing as a metal-pipe installation.

“Aquatherm installs cleaner and neater than most systems. And I say that as a man who many times stood between a customer who would say to me, ‘That piping job looks great!’ and a father who would say, ‘That’s not good enough. Do it over.’”

Fields, who has served as Director of the U.S. Green Building Council North Carolina Chapter, also applauds the efficiency and sustainability of PP-R. “Because the interior of the pipe is so uniformly smooth, you can use a smaller size pipe and still manage to have the same pressure drop as a larger size metal pipe. And it’s recyclable.”

Aquatherm also has the only piping systems in North America that directly contribute to LEED v4 points.

All that is apropos for a brewery that has given new life to an old building in Winston-Salem’s revitalized arts district. An array of reclaimed windows separates the Wise Man taproom from the brew house, making it possible for patrons to sip locally brewed beer while they admire the colorful blue—and very green—piping.